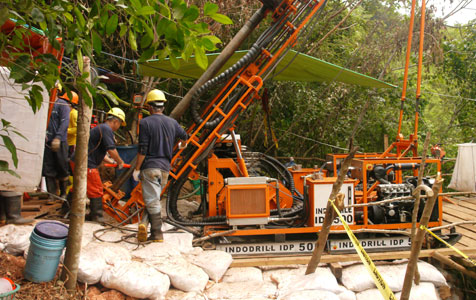 Perth-based gold explorer Red Mountain Mining is seeking to raise up to $2.8 million for drilling operations designed to increase the gold resource of its Batangas gold project in the Philippines.

Red Mountain will aim to raise the funds by conducting a rights issue of three new shares for every two shares currently held by shareholders, at a price of $0.01.

Like most companies linked to the gold price, Red Mountain’s share value has dropped sharply since April, from $0.06 to $0.025.

As part of the issue, shareholders will also receive a short and long-dated option for every two and four shares subscribed for, respectively.

Red Mountain managing director John Dugdale said the offer was “at an attractive price for our shareholders and is designed to secure the future of the company”.

Mr Dugdale added that the funds would be used for immediate drilling at Red Mountain’s Batangas gold project to, “target a resource upgrade and positive scoping into a future gold producing project”.

The Batangas project’s current combined mineral resources estimate is 408,000 ounces of gold and 606,000oz of silver.

If the issuing is successful, it stands to increase Red Mountain's total shares from more than 187 million to more than 468 million.

Meanwhile, vanadium miner TNG announced the placement of an additional $450,000 worth of shares, bringing the total amount raised to $1.45 million.

Additionally, TNG announced that its major shareholder, Ao-Zhong International Mineral Resources, has expressed interest in supporting the company in the placement at $0.07 per share.