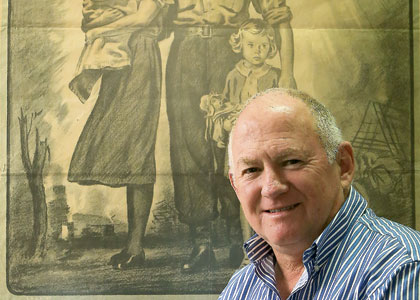 The Australian Red Cross wants to engage businesses and corporations across Western Australia as the organisation changes its operating platform to support vulnerable communities across the state more effectively.

The Red Cross, which is used to playing a vital role in war zones and famine-ravaged countries, faces unique challenges in WA.

The organisation has three regional bases, in Broome, Kalgoorlie and Bunbury, which serve as service-access points for indigenous communities and act as meeting points for social groups.

“The bases are there because those regions have been deemed areas of locational disadvantage, where communities need access to services and support,” Mr Joske said.

The Red Cross had to focus on prioritising issues facing indigenous communities and was building a new operational model to bring together the needs of communities, donors’ support and Red Cross expertise.

“We want to find community and grassroots organisations that are working directly with local needs to establish a more sustainable result and work in partnership with these smaller organisations to create legacy and ongoing impact,” Mr Joske said.

“People working in the local community who know the local issues and can get the help to the right people, this is the way forward for the Red Cross operation in WA.

“This isn’t something that is going to happen overnight, or even in the next six months, it’s a process and we are looking to in the long term, attempting to use our resources to the fullest.”

Mr Joske, who has worked as executive director of the Red Cross in WA for 10 years, is ready for the challenges ahead.

Before joining the Red Cross he served as a senior officer in the Australian Defence Force, commanding peacekeepers in Bougainville and overseeing security operations at the Sydney Olympics in 2000.

As part of its fresh strategy, the organisation, which is working alongside community groups in the Goldfields, wants to bring corporate players on board to help fund projects and engagement in the regions.

Mr Joske said the key for the Red Cross was to market its expertise to businesses and act as an intermediary between them and communities.

“Larger corporations that do want to be philanthropic and engage with communities will be able to use Red Cross with some degree of confidence that we are going to be able to get to where the need is most acute and support is most needed,” he said.

“Corporations might not be able to have local reach and touch to provide support to vulnerable communities and people.

“We can draw on our work with local community groups throughout the state to achieve meaningful results.”

Recently, the organisation took a central role in the development of several health services facilities in the Goldfields alongside the Department of Health and the Paupiyala Tjarutja Aboriginal Corporation to cater for remote communities visiting regional centres.

“The facility is having a direct positive on individuals but also creating wider positives for the community,” Mr Joske said.