A filtration product that enables the reuse of rainwater otherwise lost to stormwater systems has attracted the attention of the local government sector. 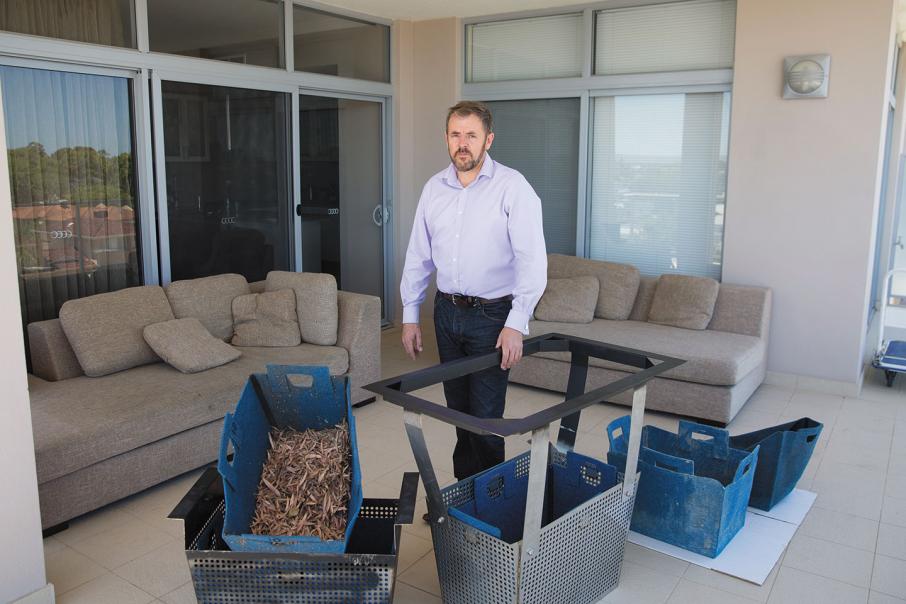 Craig Rothleitner says the filters will be installed at entrances to the stormwater system. Photo: Attila Csaszar

A filtration product that enables the reuse of rainwater otherwise lost to stormwater systems has attracted the attention of the local government sector.

Technology developed by an Applecross business has the potential to change the way local councils supply their water needs.

Urban Stormwater Technologies has invested nearly $3 million in the development of a filter to clean water at selected locations as it flows into the drainage system – the underground pipes that dispose of hundreds of gigalitres of rain annually.

“We’ve got our first government contract,” Mr Rothleitner said. “It’s with the City of Kalamunda.

“It’s a drainage system that is feeding into a main drain, and from that main drain they have set up the first aquifer storage and recovery plant in Western Australia.

“What they’re doing is drawing water from that (drain) in winter, filtering it down and then injecting it back into the ground.”

Mr Rothleitner said the basket could catch most particulates.

Under the contract with the Shire of Kalamunda, Urban Stormwater Technologies is contracted to clean out the existing pipe system and then install nine baskets upstream from the recharge plant.

Annual water use across the Perth metropolitan region is about 395 gigalitres, with about 42 per cent of that usage self-supplied, mainly from groundwater bores, which is how councils and schools source water for irrigation of parks and gardens.

Injection of rainwater into the aquifer is one way councils can get ahead on their credits, enabling them to stretch their allocations further and provide water for new developments.

“The Department of Water have capped all of the councils,” Mr Rothleitner said.

“They have to try and trade with people who hold water licences, and as water becomes more valuable it’s becoming a lot harder.”

Department of Water director of regions Richard Newman said the government worked closely with councils to save water through the Waterwise Council program.

“Through this program water-saving techniques and technologies are used to create efficiencies and improvements in the use of groundwater for irrigation of parks and ovals and water use in council-run facilities,” Mr Newman said.

“These technologies include climate-sensitive irrigation systems, increased harvesting and use of recycled stormwater to support groundwater use, and employment of water-efficient irrigation practices such as hydrozoning.”

Mr Rothleitner pointed to another additional benefit. He said stormwater system blockages could have serious consequences as the inflow of rubbish and plant material accumulated at the bottom of drain pits, preventing water from flowing through the drainage system or seeping into the soil.

That contributed to flash floods, mosquito breeding, and algal blooms in the Swan and Canning rivers. Instead, the organic matter piled up at the bottom of pits would be used in a waste-to-energy plant, he said.

Meanwhile, Malaga business Doust Plumbing Products will begin sales of a filtration system for household use in the next few months.

Managing director Philip Doust said the system would be used to filter water collected on roofs for storage in rainwater tanks.

He said most filters in use dealt with the water after it had passed through the pump or tank, with pollutants moving through those filters having often been broken up in the pumping process.

“Three years ago I put some rainwater tanks in, nearly everything I bought didn’t work,” Mr Doust said. “In the atmosphere (there’s) a lot of dirt and it’s clogging all the tanks up.”

Mr Doust saw potential for his filtration system in areas without utility-level water supply, such as in Esperance.

There has been a growing public debate about the appropriate way to manage WA’s scarce water resources.

Last December, Business News reported that a paper produced by ACIL Allen for Brookfield Water suggested the need for a large increase in public investment into water supply as the state’s population increased, unless alternative sources were found.

That shortfall would be 240GL when the population reached 3.5 million people, the paper said.

Usage of decentralised water recycling operations, such as for parks and gardens, could reduce required investment by around $1.5 billion, ACIL Allen found.