Followers of Fortescue Metals Group and its mercurial chairman, Andrew Forrest, have been on a roller-coaster ride during the past five years; but if the current bout of optimism is well-founded, FMG could be heading back to its record price of $12 a share reached in 2008, and Mr Forrest heading for a $12 billion fortune. 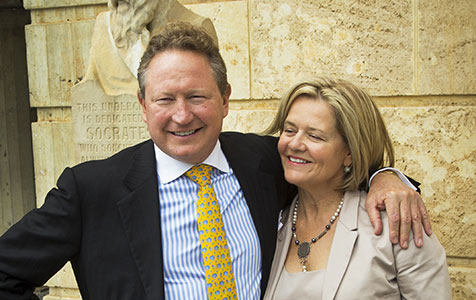 Followers of Fortescue Metals Group and its mercurial chairman, Andrew Forrest, have been on a roller-coaster ride during the past five years; but if the current bout of optimism is well-founded, FMG could be heading back to its record price of $12 a share reached in 2008, and Mr Forrest heading for a $12 billion fortune.

No guarantee is attached to either of those forecasts, simply because so much depends on China’s appetite for iron ore, the price of the stuff, the high debt levels inside FMG, and whether it can successfully drive down costs.

Until a few weeks ago a suggestion of the ‘double 12’ would have been considered outrageous, because the popular view of investment banks analysts was that iron ore prices were heading for a big fall, and so was the share price of FMG, taking Mr Forrest’s fortune with it.

Times change. The iron ore price refuses to obey the predictions of highly rated analysts such as the UBS iron ore specialist Tom Price, who famously tipped a price of $US70 a tonne for about now, which is roughly half the current level of $US130/t.

As for Mr Forrest’s fortune, it is sitting pretty at around $5.7 billion, comfortably above the surprisingly lowly $3.7 billion assigned to him in a local newspaper’s attempt to compile a local ‘rich list’, but roughly in line with the $5.4 billion calculated for the annual WA rich survey to be published in Thursday’s edition of Business News.

But while it might be relatively easy to take a stab at what someone owns, especially if it mainly comprises shares in an ASX-listed company, you will never know what they owe.

The classic example of that ‘own versus owe’ puzzle was part of the testimony provided by a banker to the WA Inc inquiry of a few decades ago, when the man in the witness box said his bank had provided a large loan to Barrick House founder Denis Horgan because BRW magazine said he was worth $80 million.

Wow. A bank using a magazine as a valuation tool. Talk about the blind leading the blind.

Today it is Mr Forrest’s time in the limelight of wealth – a job made somewhat easier by a report published yesterday by the local investment banking favourite, Macquarie.

What the analysts at Macquarie see is nothing but boom-time good news stretching into the future, complete with an updated valuation on FMG of $6.58 a share, and a target share price over the next 12 months of $6.15 – with the discount applied because FMG is a one-trick iron ore pony.

If Macquarie is correct, and that requires a degree of trust, then at $6.15 Mr Forrest’s 1 billion FMG shares will be worth $6.15 billion, about 12 per cent higher than today.

But, and this is the interesting bit, Macquarie reckons the benefits of the iron ore price staying up are starting to be felt in FMG’s balance sheet, and are setting the company up for a fabulous future.

Rather than worry about whether FMG can service its $12 billion in total debt, Macquarie says the company is now able to do that even if the iron ore price falls to $US93/t.

“As a result, the debate is seemingly set to shift from FMG’s ability to manage its current debts, to its intentions for the ensuing cash pile,” Macquarie said.

Higher dividends will be one way of coping with a pre-tax profit tipped to hit $5.48 billion next year with the annual payout expected to be around 30.2 cents, rising to 44.3c in 2016.

Even more interesting than the cash flood (if that’s imaginable) is Macquarie comparison of FMG and the two leaders of WA’s iron ore industry – Rio Tinto and BHP Billiton – thanks to FMG driving its cash costs down to $US30/t and its all-in cost to $US62/t, a level that will leave the company handsomely profitable, with a pre-tax profit margin of 38 per cent, even if the iron ore price falls to $US90/t.

“While this (38 per cent margin) is lower than the majors’ Pilbara operations, without the drag of coal and aluminium, this is nevertheless higher than Rio Tinto generates across its portfolio in the long term, and close to what BHP Billiton delivers in totality,” Macquarie said.

Wow (again), because if Macquarie is right FMG is on the cusp of a boom that could, by some estimations, make the company a better financial performer than the big boys of Australian mining.

Now that would really give Mr Forrest something to crow about, especially if the stock keeps steaming higher towards that all-time $12 high.