Whoever wins in WA’s March 9 poll, there is a chance to minimise payroll tax -collectively. 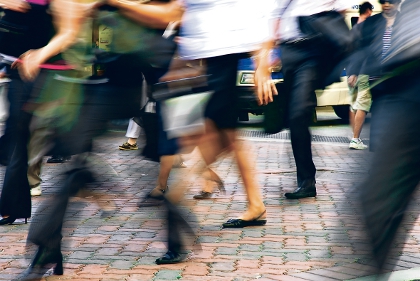 BIGGER STRIDES: The states need to agree collectively to cut payroll tax rates to ensure a meaningful lowering of the impost on business. Photo: Grant Currall

Whoever wins in WA’s March 9 poll, there is a chance to minimise payroll tax -collectively.

THERE have been major lobbying efforts to get payroll tax on the agenda during this election campaign.

The Chamber of Commerce and Industry Western Australia has been pushing hard on the subject, even to the extent of a public relations campaign via Twitter alongside more traditional avenues.

Despite the high level of small businesses out there, it is not a subject that gains a lot of political traction. In the end, many small businesses fall below the current $750,000 payroll threshold that must be reached before the tax kicks in.

Treasurer Troy Buswell knows this, which is why he dangled a rather limp carrot before the electorate earlier this week, offering the bare minimum, he hopes, to get the issue off the political agenda.

Speaking at a breakfast debate against Labor’s treasury spokesman, Ben Wyatt, as part of the WA Business News Success & Leadership series on Tuesday, Mr Buswell said the threshold would be lifted from its current level to $850,000 by 2015-16.

That is a 13 per cent increase over three years - almost as much as the nurses just got.

Given wages growth, this is very likely to amount to not much at all, which is no doubt why the government is happy to promise to give it away in the first place.

If it does make this change, it knows ‘bracket creep’ will take care of the problem pretty quickly. And, of course, that is the big if.

A promise made today for three years away leaves me thinking it was made to be broken.

Anyway, as I have written many times, payroll tax is too hard to do anything more than tinker with because every cut is exacerbated by the way the GST disbursement process by the Commonwealth Grants Commission works.

Each state’s grants are guided by an average per capita formula that allocates GST money on the basis of what revenue they do or don’t already have.

States that under tax compared to other states are penalised. The Commonwealth assumes that a state has collected the average and therefore calculates a theoretical revenue total that is the basis for the GST grant.

In the case of payroll tax, the grants commission looks at the rates applied and finds an average. In effect, if WA lopped $1 billion off its payroll tax revenue by cutting the rate, the Commonwealth would deem that as revenue it could have raised and reduce its grants accordingly.

Broadly speaking, a $1 billion hit to revenue is, therefore, doubled. That is a strong disincentive to downward tax competition among the states.

While it is understandable such a system can’t reward a state that simply decided not to tax its citizens or businesses, the current model design has the opposite effect - it encourages taxation and creates a race to the top, because those jurisdictions with higher tax rates are deemed to have earned the average rate.

So they get more tax income and the grants are not cut as a result. It is an absurd incentive to upward tax competition among the states.

So what is my solution to this?

The one way to change the GST is to have all the states and the Commonwealth to agree. This will never happen because there are too many winners and losers.

But there is a way the payroll tax dilemma could be resolved.

It needs the states, or at least the major states, to collectively agree to cut their rates.

At no time since the GST’s introduction has this been more achievable. The four biggest states are all in conservative hands, which means they would lean towards helping business.

Admittedly, Queensland and NSW are in particular trouble when it comes to revenue but they still need business-friendly policies that encourage growth; what better place to start when it comes to sacrifices -cutting a tax on jobs.

This does not have to be a Liberal move either. Should Labor win in WA it too could improve the employment environment with a move in this direction.

Both Mr Buswell and Mr Wyatt could make this call in conjunction with NSW, Queensland and Victoria. If South Australia and Tasmania didn’t come to the party, the impact would be minimal.

The apple isle already consumes well above its weight in Commonwealth funding, its failure to change payroll tax would barely register as a hit on GST grants and would more reveal its colours as an anti-business welfare state.

Of course, this would take collective will. But, for Liberal treasurers it would be a chance to challenge the central role of Canberra as the puppeteer of GST distribution and get a better deal for business without the double whammy of a hit to GST for any state that moved first and went it alone.

For Mr Wyatt, it could help differentiate his version of Labor from the toxic cling of Julia Gillard’s long, slow march to electoral oblivion. A collective agreement with a Labor element in the negotiations might be different from a joint Liberal one but at least it breaks the states from their current stalemate.

I suspect a Liberal version would involve cutting the full payroll tax rate (5.5 per cent in WA) by a significant amount (let’s say to 3 per cent).

Mr Wyatt might prefer a more small business-friendly raising of the threshold by a significant amount.

A public comment at our debate this week suggested $1.5 million, up from $750,000, and to have it indexed to inflation to avoid bracket creep - a palatable option for the major parties and a policy that business lobby groups like the Chamber of Commerce and Industry have advocated.

The big plus for both gentlemen is that this is the type of promise they can make and keep. I admit that a promise that relies on others is not worth that much - but what political promise is?

Making such a commitment would signal intent. It would show real leadership and vision.

If WA signalled a move in this direction, other business lobby groups around the country would have something to take to their politicians.

Perhaps I am naive to think this could ever really happen but I believe something must be done to break the deadlock in the GST distribution argument, which is a significant threat to the harmony of our federal system.