Readers tell us what they want

The upheavals in the iron ore sector dominated news in 2012 but our readers were also keen to hear about mining magnates, real estate, new hotels and one particular barrister. 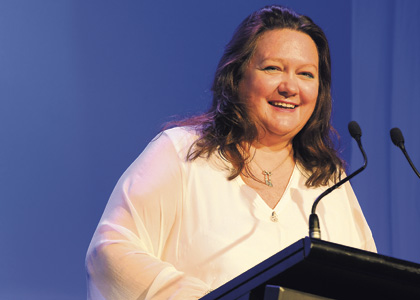 WIDELY READ: ‘Gina Rinehart: the whole story’ was our most read online article for 2012.

The upheavals in the iron ore sector dominated news in 2012 but our readers were also keen to hear about mining magnates, real estate, new hotels and one particular barrister.

ONLINE news reporting can be likened to the ultimate democracy. Subscribers choose the stories they want to read and the publishers get a daily report on what sparked interest - and what didn’t.

In contrast to newspapers, the internet tells us exactly how many times each article is read.

Added to that, subscribers can provide instant feedback by commenting on the stories of the day.

This year, there was one article that ranked well above all others.

Titled ‘Gina Rinehart: the whole story’, it contained the full text of a speech delivered days earlier by the Hancock Prospecting chair.

The speech caused a stir, after it was widely reported that Mrs Rinehart suggested the minimum wage be cut and called for people who are jealous of the wealthy to socialise less and work harder.

WA Business News chose to reproduce her comments in full, so that our readers could judge for themselves.

The judgement was clear and swift. Many subscribers selected the article and the average duration of their stay was nearly 10 minutes, meaning they read the speech in full; and they were quick to pass judgement.

The vast majority felt Mrs Rinehart had been harshly treated by the mainstream press, and were upset that one small part of a lengthy speech totally obscured many other points she had made.

As a news editor, it was one of those moments when a publishing experiment - putting a full speech, online - delivered a pleasant surprise.

One finding that did not cause me any surprise was the continued high level of interest among our readers in the fortunes of the Perth property market.

As investors and homeowners, many of our subscribers are obviously clutching for any encouraging signs of an uptick on property values.

That would explain why the second most-read article of the year was ‘WAtipped to lead house price surge’.

It was published in June, and six months on there isn’t much sign of a pick-up in property values.

By contrast, housing rents in Perth have jumped, and that caused a lot of interest in the article headlined ‘44 WA suburbs cheaper to buy than rent’.

While big mining projects dominate economic discussion in Western Australia, our subscribers were keen to read about another big investment, this time in hospitality and tourism.

In August, Crown announced it would build Perth’s first 6-star hotel, which would also be the city’s largest; and to sweeten the deal, it had agreement to have 500 more gaming machines in its casino.

On a completely different note, there was huge interest in the trial of prominent barrister Lloyd Rayney.

The report of his acquittal was one of the best-read articles of the year; a follow-up analysis was also widely read, but caused division among our readers, with some claiming this was not an appropriate topic for a business newspaper to cover.

Outside of these topics, it was the dramatic volatility in the resources sector that triggered most interest from our subscribers.

In August, it was all about BHP Billiton, and the scrapping of its outer harbour project at Port Hedland.

In both of these cases, there was keen interest in the bad news, but there was even more interest in the positive news - specifically the breakthrough deal that BHP, FMG and Atlas Iron secured at Port Hedland’s inner harbour, and the refinancing FMG completed.

That news provided a reassuring indication that the good business news in WA still far outweighs the negatives.

The tens of billions of dollars that have already been invested in resources and infrastructure projects, or are due to be invested in the next two to three years, will deliver a bright future for the state.

But if history is any guide, even more new projects will follow in time.

That’s a good note to wish all of our subscribers the very best for the holiday season and for business in 2013.