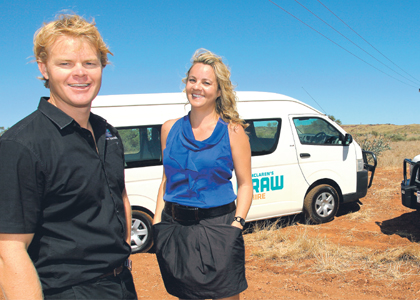 DELIVERY BUSINESS: Raw Hire’s Sean and Lisa Clarke say they aim to understand what makes a difference to their customers, and make sure they can deliver.

FOR Raw Hire directors Sean and Lisa Clarke, sharing profit with employees is simply a way of sharing the rewards of the vehicle hire company’s significant growth.

The husband-and-wife team owned just a single rental vehicle when they founded Raw Hire (formerly McLarens Hire) in 1998 but have since added more than 1,300 vehicles to their arsenal, along with an annual turnover of more than $30 million.

Raw Hire has just rolled out a profit-sharing scheme under which full-time employees of at least six months receive payments ranging from $100 to $5,000 from a fixed percentage of total company profits as reward for their contributions to the business.

The payments are not linked to key performance indicators; rather, they are a reward for instances where employees made an exceptional effort or demonstrated the values of the organisation in their conduct.

“It’s just part of giving back some of the success of the business,” Ms Clarke told WA Business News.

“It’s something that’s totally not an expectation of our employees; it’s not included in the way that they perform, it’s just how well the business performs.

“The way that we’ve always built our business is to try and build a team and culture that wants to grow with our company. I think this is just another little step in building that culture.”

Raw Hire’s directors allocated scores to employees based on their conduct and their seniority within the company. These scores were then used to decide how much of the profit pool they were allocated.

Chief executive Byron Smith told WA Business News the scores were a reflection of the softer side of the business, which was often overlooked in staff reward schemes.

“Because the money was coming from Sean and Lisa to them, I see it as more of a way of them being recognised by the board and senior management for their contribution,” Mr Smith said.

“I see it being more of a cultural reward and a values reward than a performance driver.” The scheme also doubles as a way of addressing the staff retention problems that plague businesses based in the Pilbara.

Mr Smith said while the company conducted annual reviews of the housing market to determine demand, it was not in a position to offer housing to all of its employees and had to find other ways to ensure that it remained an employer of choice.

With major contracts in place to supply large vehicles for major developments such as Chevron’s Wheatstone LNG project, Mr Smith was confident Raw Hire’s growth would be sustained over the coming years.

The company is in the process of a restructure whereby further staff will be deployed to focus on building relationships with local clients in the north-west, with a third Pilbara branch set to open in Newman next month.

“One of the biggest points of difference that Raw Hire has always had as a company is, because we were started in Karratha, we have a very strong business development area in the north-west” Mr Smith said.

“Our clients are always being asked to reduce costs and look for value-adds, so we have to be adjusting our ability to deliver better value for them.

“Otherwise it just becomes a price war - a car is a car. We need to understand what really makes a difference to our customers and make sure we can deliver that.”