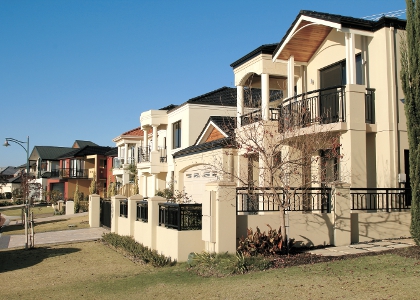 Perth's residential property market has cemented itself as the standout performer across capital cities, prompting calls for government intervention to make housing affordability a priority as prices continue to rise.

Sydney's market broke new ground in the back-end of last year, with median house and unit prices reaching a record $656,415 and $475,314 respectively.

It followed a 3.4 per cent annual house price increase and 5.6 per cent rise for units.

Melbourne housing market showed more restraint, with house prices up just 0.5 per cent over the year despite a 2.4 per cent jump in the last quarter.

Adelaide has again edged out Brisbane as the most affordable mainland capital in Australia, posting a median house price of $432,309 compared to the Queensland capital's $433,302 average in the year to December.

The city of churches also boasts the country's cheapest apartments, after Hobart experienced a 20.2 per cent surge in its unit prices over the 12 months.

However, Hobart remains the overall most affordable capital for homebuyers with a median house price of $322,420.

Greens Senator Scott Ludlam said the WA figures showed a dire need for government to tackle housing affordibility, but neither major party had put forward a plan to tackle a looming crisis.

Mr Ludlam said the dream of home ownership was becoming a "distant mirage" for most Western Australians, while median rents jumped by $70 over the past year.

"We need to see dynamic policies that go to the heart of the problem," Senator Ludlam said in a statement.

Greens WA spokesperson for housing Lynn MacLaren placed some blame on the first home-owners grant, which she said needed to be means tested and phased out.

"It has had a disastrous inflationary impact on housing prices yet the major parties just tinker with it, sometimes even increase it," Ms MacLaren said.

"More than $13 billion in public money has been poured into the scheme, yet not once has any economic modelling been done on the distortion it has caused to the market."

Meanwhile, the new homes sector is also exhibiting significant growth, both in Western Australia and nationally.

Sales were up 3.3 per cent over the December quarter, but remained 12.7 per cent lower than the same quarter of 2011.

HIA economist Geordan Murray suggested it indicated a possible rejuvenation of the housing market in the coming months but, he said, it would depend on any interest rate cuts and other support.

"If we look at the under-performing market for 2012 - detached houses - the December improvement was broad-based as sales increased in all but one of the surveyed states," he said.

"However, the overall result for 2012 leaves plenty of room for improvement.

"It is hoped that further signs of an impending new home building recovery emerge in coming months. However, it remains the case that lower interest rates alone will not deliver a recovery of the magnitude required by Australia's economy and population."