Oakajee is being rejuvenated not so much as a mining project but more as an infrastructure play. 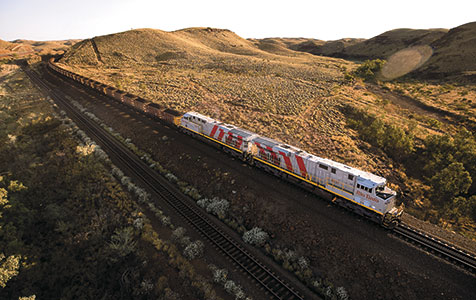 RISK: Miners could consider third-party haulage contracts as a way of offsetting construction and operating costs.

Oakajee is being rejuvenated not so much as a mining project but more as an infrastructure play.

Railways have a tendency to excite engineers, miners and politicians, but not bankers, with the money men likely to have the last word in what’s shaping as an interesting attempt to relaunch Western Australia’s mining boom.

Three rail and port systems with a collective price tag of more than $20 billion are in different stages of construction or planning in the state today.

If they proceed, and that’s a big if, the mining boom will indeed be relaunched because railways and ports are the key element in shifting big volumes of relatively low-value material such as iron ore, the commodity at the centre of all three rail and port projects.

First train out of the station will be that servicing the Roy Hill project of Gina Rinehart and partners and, while it will be largely dedicated to hauling iron ore from the central Pilbara region to Port Hedland, that’s not necessarily all it will do.

Other, smaller, mining companies are angling to hitch a ride on the Rinehart express and, while it is possible they will not be able to negotiate terms of access, the game of keeping third parties off private rail systems is reaching its use-by date.

Atlas Iron and Brockman Mining are two names being mentioned as possible beneficiaries from the Roy Hill rail, which will pass close to some of their prospects, with one leading investment bank, UBS, naming those two companies as being interested in negotiating a haulage contract with Mrs Rinehart.

Whether a mutually beneficial deal can be struck is the critical question and, while haulage deals have been difficult to structure in the past, there is a change emerging with the arrangement between Fortescue Metals Group and BC Iron possibly serving as a template for deals.

The other rail and port systems, which have recently attracted revived interest, will certainly be keen to sign up third-party haulage contracts as a way of offsetting their construction and operating costs.

Oakajee, which has spent more than 20 years on the drawing board, is being rejuvenated not so much as a mining project but more as an infrastructure play, which would see Chinese conglomerate Citic Pacific Mining at the heart of the development with multiple ore haulage contracts from iron ore mines scattered across the Murchison.

The Anketell project of Aquila Resources and its Chinese partner, Baosteel, also has the potential to provide haulage and port services to other mines.

Talking up the benefits of shared services in the bulk mining sector was a popular topic at the start of the first phase of the mining boom. It is something that government wants to happen because it generates economic activity and will help develop remote corners of the state.

It is history that BHP Billiton and Rio Tinto refused to allow third parties on to their rail systems, forcing Fortescue to build its own infrastructure.

Times change and the WA bulk commodities industry is heading for a critical mass where rail and port services will be appealing to businesses in their own right and not necessarily seen as an essential part of the mining process.

Specialist transport providers such as Aurizon, the old Queensland Rail, are already active in the Pilbara. Other service providers will enter the industry and perhaps take ownership of the infrastructure, leaving mining to the miners.

Oakajee, if Citic Pacific can see a profit in building the port and rail system, could be the deal that changes the way heavy haul systems operate in WA, which is why Premier Colin Barnett is urging the Chinese giant to take control of the mothballed project.

There are risks for everyone involved, not least the danger that the iron ore price will finally succumb to sluggish Chinese demand and rising production in Australia and Brazil.

However, if prices do stay stronger for longer (heard that one before?) then WA might enjoy a rebirth of the boom, led this time by a rail and port rush that encourages the development of a large number of smaller mines rather than a handful of mega projects.

If that sounds like a “build it and they will come” approach, that’s because it is.

But that does not mean it will not work, just that it will be different to what’s happened in the past. The BC Iron deal with Fortescue showed that third-party haulage arrangements could work. Roy Hill might follow, with Oakajee the real game changer.

Art not so super

If you’re interested in art but can’t afford the prices demanded by galleries then wait a while because over the next two years the market is likely to be flooded with paintings and other collectibles currently owned by self-managed superannuation funds, but destined to be offloaded thanks to tax laws changes.

Already tight, but often ignored by people with art in their funds, the rules governing what you can do with art will become draconian in little more than two years from now.

From mid-2016 no art owned by a superannuation fund can be stored (let along displayed) in the home of a fund’s trustee. It may be stored, but not displayed in a business, and all art works must be insured in the name of the super fund.

The changes have been introduced because too much art legally owned by self-managed superannuation funds was being used to decorate the homes of fund trustees.

Artists and galleries are worried about the changes, and the effect it is having on sales today. But the more worrying aspect is for art being dumped by fund managers when it becomes illegal to show it to their friends at home.

Talk of a China slowdown worries some investors but Yusuf Alireza, chief executive of the Hong Kong-based commodity trader, Noble Group, put the slow down into “dollar perspective” during a recent interview.

In 2005 China growing at 12 per cent a year meant an annual economic expansion valued at $US750 billion.

Today, China growing at “just” 7.5 per cent represents annual economic expansion valued $US1.25 trillion thanks to the effect of slower growth off a bigger base.