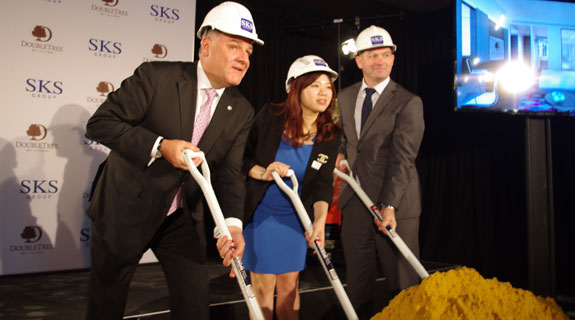 The third DoubleTree by Hilton hotel announced for Perth will likely be the first to open, with forward works about to start and a ground-breaking ceremony held at the Northbridge site today.

Tourism Minister Kim Hames was on hand with Hilton Worldwide Australasia vice-president Paul Hutton and SKS Group managing director Windi Sim to officially launch the hotel, which is being built at the old Bankwest building on James Street.

As reported first by Business News last year, DoubleTree by Hilton Northbridge Amansari is the third DoubleTree property in the works for Perth, alongside similar hotels at Barrack Square and in Fremantle.

The hotel is scheduled to complete the major construction works in the second quarter of 2017, ahead of a December opening.

Local builder Cooper & Oxley has been contracted to perform the forward works, subject to a building licence from the City of Perth, while the main construction contract will go to tender in August.

The hotel will be built using modules constructed in China, by the Australian arm of global conglomerate CIMC.

Mr Hutton said the hotel would fit well with the other two DoubleTree properties planned in Fremantle and at Barrack Square.

“The three strategic locations that they’re placed in are all about social, entertainment and corporate, but it’s obviously about leisure as well, we’re delighted with that,” he said.

“We bring into the market that level of affordability so it will appeal to more people.

“We think the time is right and the wider public has really embraced this full service, but mid-tier deluxe brand that we have.”

The other two DoubleTree hotels are not advancing as quickly as the Northbridge hotel, primarily because they are entirely new builds and not additions to an existing structure.

At Barrack Square, SKS Group has completed negotiations with the Metropolitan Redevelopment Authority regarding the hotel’s amended design, but the developer is awaiting approval from the Swan River Trust to begin construction.

In Fremantle, demolition works are complete and a tender is expected to be called in coming months for the build, while SKS Group is working with the City of Fremantle to improve the amenity of Princess May Park for local residents.

Dr Hames said the state government was pleased to see options coming to market, with a plethora of high-end luxury builds underway, most notably Crown Towers and the Westin Perth.

The tourism minister said the market would determine if the balance of hotel options was right to meet tourist demand.

“It all depends at the end of the day on occupancy rates, and if the larger higher-star hotels don’t get the occupancy, they’ll have to reduce their price,” Dr Hames said.

“It’s all about cost but it’s great to have hotels like this to cater for a slightly lower cost market.”