North Fremantle's days as a light industrial hub, providing a buffer between the port city of Fremantle and the upmarket suburbs of Cottesloe and Mosman Park, are well and truly numbered, with long-term plans to build about 3,000 new apartments and a reti 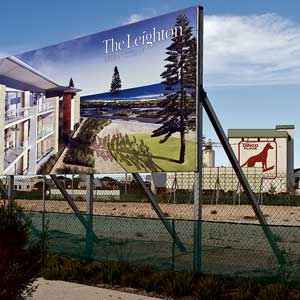 North Fremantle's days as a light industrial hub, providing a buffer between the port city of Fremantle and the upmarket suburbs of Cottesloe and Mosman Park, are well and truly numbered, with long-term plans to build about 3,000 new apartments and a retirement village at Leighton Beach and its surrounds.

The line-up of stakeholders in the area reads like a who's who of the property development industry in WA - Brookfield Multiplex, Cape Bouvard, SAS Global - with petroleum giants Shell Australia and Caltex, and mortgage aggregator Australian Finance Group adding to the mix.

And while the development pipeline is long term, the outcome could be a series of residential complexes dwarfing Mirvac and Multiplex Living's apartments on the old Leighton marshalling yards.

One of the most desirable sites in the area - the Matilda Bay Brewing Company - is likely to be converted to a retirement village.

WA Business News understands Jolimont-based retirement village operator, St Ives Group, has an option to buy the site, although the company could not redevelop until the land is zoned residential by the WA Planning Commission.

Foster's, which owns Matilda Bay Brewing Company, ceased brewing operations at the site, owned by HLM Holdings, in September last year, but retains a lease until 2013, with a five-year option to extend.

St Ives Group marketing and development general manager, Angus Kukura, declined to comment on any agreement, although he said the company's strategy for acquiring new sites was to consider land on major arterial routes.

Further along Stirling Highway, the iconic Dingo Flour site - part-way through a heritage listing process - may ultimately be redeveloped by Brookfield Multiplex, which has a joint-venture agreement with the owner, Allied Mills.

A conservation plan is being put together for the property, which was listed on the state's interim heritage register in December last year.

On the Leighton Beach side of the highway, Shell Australia and Caltex own a tranche of about 10 hectares, from which they operate a joint terminal.

Shell Australia spokesman Peter Scott said the current agreement had 11 years to run and there were no immediate plans to push for a rezoning.

"As far as the joint terminal is concerned, we've been considering development in that area in the longer term, but right now, there are no development applications or plans in [with council]," he said.

Next door, Standard Wool Australia's 1.7ha site on Bracks Street has attracted the attention of developer Cape Bouvard, which has put forward an initial payment for the site and is due to lodge another.

The land is currently zoned industrial under the metropolitan region and local schemes.

Cape Bouvard development manager Peter van Gent said the company regarded the site as a medium-term land banking opportunity, which would need to clear several hurdles including a metropolitan region scheme amendment and environmental approvals before it could be developed.

"The reality is, any rezoning attempt would take eight years to come through," he said.

Private developers are also active in the North Fremantle area, with the former Rose Hotel on Stirling Highway being converted into an apartment complex and luxury day spa.

The project, led by Rose Hotel managing director Bruce Moriarty, is due for practical completion by the end of October.

Other developments in the pipeline include SAS Global's plan to build 192 apartments on the former OneSteel site, and AFG's proposal for 76 apartments and 16 townhouses on its McCabe Street site.

Both projects have been stymied by a height study of the area, undertaken by the City of Fremantle earlier this year, which found the companies' structure plans were not of an appropriate scale.

Meanwhile, both Mirvac and Multiplex Living are progressing with their respective $150 million Leighton Beach projects.

Multiplex sold its first stage of 20 apartments, for an average $3.7 million, earlier this year, while Mirvac reached a top price of just over $8.7 million for one of its apartments.