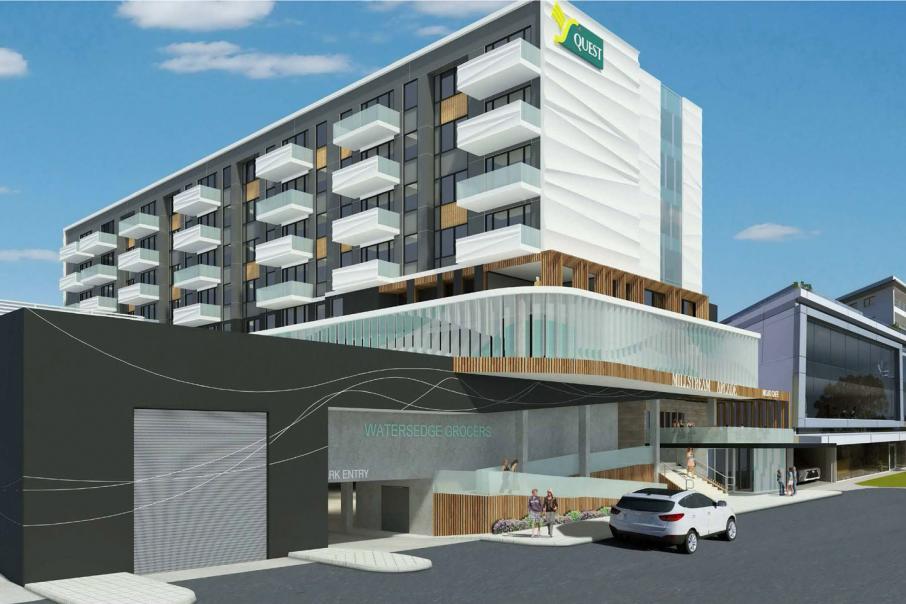 An artist's impression of the project's Harper Terrace frontage.

Quest Serviced Apartments is continuing its aggressive march on Perth, anchoring a hotel and new retail development at the Millstream Arcade in South Perth.

Plans for a seven storey, 90-apartment Quest hotel, as well as a new retail arcade, were approved by the metropolitan central development assessment panel yesterday.

The project, designed by Meyer Shircore & Associates Architects has a base construction cost of $21.5 million according to DAP agenda documents.

Under the plan, the existing Millstream Arcade will be demolished and replaced by 10 small shops, a supermarket and cafés at either end of the arcade. The new arcade has been designed to bring activation to Mends Street.

Quest has been increasingly active in Western Australia’s capital since it unveiled five new projects midway through 2014.

Of those developments, Quest hotels at Mounts Bay Road in the city, Kings Park Road in West Perth and on Flinders Lane in Rockingham have been completed, while construction is under way at Adelaide Terrace in East Perth and on Pakenham Street in Fremantle.

The serviced apartments chain is also planning a property in Midland, which is expected to open in June 2017.

In total, there are 22 Quest properties in WA.

The Millstream Arcade is owned by Perth-based property group Silverleaf Investments, which bought the shopping centre in April last year for $13.6 million.

Silverleaf, which is owned by Gerard O’Brien, is also nearing completion of a $30 million redevelopment at Fremantle’s Atwell Arcade, a plan that includes 3,000 square metres of office space and a revamped retail offering.