Logistics company Qube Holdings has written down the value of its port assets at Utah Point and Dampier by $38.5 million, after reviewing the outlook for the iron ore and oil and gas sectors. 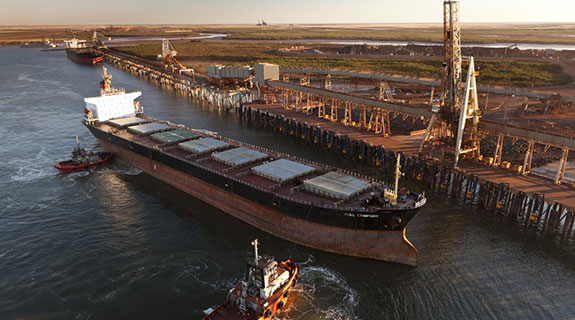 Logistics company QUBE Holdings has written down the value of its port assets at Utah Point and Dampier by $38.5 million, after reviewing the outlook for the iron ore and oil and gas sectors.

Its operational assets at the Utah Point iron ore export facility at Port Hedland has been written down by $19.6 million, as a result of Qube expecting lower long-term volumes and earnings from the facility.

Qube’s primary customer at Utah Point is Atlas Iron, which completed a major restructuring this year after initially closing its mines in response to a plunge in iron ore prices.

The restructuring included Qube and other contractors accepting payments that are tied to movements in Atlas’s cash flow and iron ore prices.

“Pleasingly, Qube has been receiving rates above the base rates as the iron ore price and Australian dollar have recently been trading favourably to the levels required for Atlas to pay additional amounts to Qube,” the company said in its annual report.

The Sydney-based contractor said its revenue and earnings from Atlas in the current financial year would be significantly lower if it only received the base payment.

Qube’s write-down of its stevedoring assets does not directly affect the state government’s planned sale of the Utah Point Bulk Handling Facility, but adds to speculation the government will struggle to secure an attractive price.

“This decision was a result of the rapid and significant decline in oil & gas related activities in the second half of the financial year following the drop in the oil price, combined with the expectation of limited major new capital projects that would use this facility in the medium term,” the company said.

“As a result, Qube has revised the forecast activity across this facility compared to when the business case was prepared.”

Qube also disclosed that two of its larger contracts in the Pilbara were completed this year.

It had been providing laydown and storage services for Norwegian company Yara International, which is building an $800 million ammonium nitrate plant on the Burrup peninsula, and had undertaken project work at Port Hedland for Hancock Prospecting’s Roy Hill iron ore mine.

Another notable development in 2015 was the decision by Arrium, which was one of Qube’s largest customers, to close its Peculiar Known iron ore mine in South Australia.

On a positive note, Qube said the development of its facilities at Rous Head in Fremantle was nearing completion.

The company said the larger site would enable it to consolidate and expand its operations, “providing scale and cost efficiencies to reinforce Qube’s position as the largest port logistics operator in Fremantle”.

For the year to June 2015, Qube reported a 19 per cent lift in underlying net profit to $105 million, but after accounting for write-downs and other adjustments, net profit fell 2 per cent to $86 million.