Major progress is being made at one of the flagship sites at Elizabeth Quay. 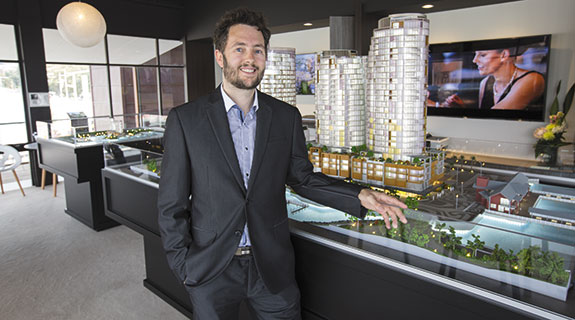 IN EARLY: Andrew Toulalan is the first buyer of an Elizabeth Quay apartment. Photo: Attila Csaszar

Major progress is being made at one of the flagship sites at Elizabeth Quay.

Developer Far East Consortium expects to appoint a construction contractor before the end of the year for its Ritz-Carlton Hotel and The Towers, with the first apartment contracts being signed ahead of the official sales launch at the end of the month.

Some of Western Australia’s largest construction companies are vying for the works, which are estimated to cost around $400 million, according to City of Perth development assessment panel documents.

Brookfield Multiplex, John Holland, Broad and Probuild are among the companies known to be competing for the job, which will be among Perth’s largest-value and also most complex construction projects, comprising three separate towers, each with a basement level underneath the water line.

Once a contractor is appointed, work is expected to start in March next year, subject to a final building permit being issued by the City of Perth, with the project to take around three years to complete.

PRD Nationwide is handling apartment sales, with owner Angus Murray telling Business News he had received more than 6,000 enquiries during the past 12 months.

Mr Murray said 300 people had paid a $20,000 deposit as a formal expression of interest for the 335 apartments, with the first contracts from that pool being signed last week.

Sales to the wider public will be launched at the end of the month.

Mr Murray said the interest was mostly coming from Perth locals, with buyers particularly attracted by the unique nature of the development.

“All of those factors are important. People realise that you can go to South Perth and there are half a dozen developments all offering something very similar, and of course there will likely be many more, so you can’t really have something unique.”

The first person to sign a contract for an apartment was WA Holiday Guide founder Andrew Toulalan, who committed to spend $784,000 on a one-bedroom apartment on level 18 of the River Tower.

Mr Toulalan said he was planning to live in the apartment, while also believing it to be a solid investment.

“History also shows that, despite market cycles, buying in at the first stage of a project always sees the greatest capital gains.”

The progress at the Ritz-Carlton site will be welcome news for the Metropolitan Redevelopment Authority, which is evaluating offers from developers for another site expected to yield apartments and a hotel on the opposite side of the quay.

The MRA is expecting public open spaces at Elizabeth Quay to be completed by the end of the year, with the first retail and hospitality offerings scheduled to open at this time.

However, the developers of Elizabeth Quay’s other major development sites have had mixed success so far.

Last month, Chevron confirmed long-running speculation that it was seeking to delay the development of a 30-level office tower, seeking an amendment to its contract with the MRA to allow it to start work in 2018, rather than by the end of next year.

However, Elizabeth Quay’s other major developer, Brookfield Property Partners, says it’s making good progress on its site, even though it has yet to lock in a suitable anchor tenant and wouldn’t be drawn on a development timeline.

Brookfield Property Partners Australian office division head of development, Carl Schibrowski, told Business News the developer was seeking to create a two-tower project, one of around 20,000 square metres, and another 60,000sqm.

But Mr Schibrowski said Brookfield was also keeping its options open in light of depressed office market conditions, with a number of hotel groups having approached the company in recent months.

Mr Schibrowski, who also flagged the possibility of apartments, said Brookfield was committed to supporting the precinct in every way it could, with its construction arm, Brookfield Multiplex, also part of CBus Property’s bid for the aforementioned residential and hotel development site yet to be allocated.

Brookfield Property Partners Australian office division chief operating officer, Kurt Wilkinson, said he was excited about the developer’s plans for Elizabeth Quay and how it could complement its Brookfield Place precinct, where construction was officially completed on the second tower last week.

“It’s going to add a lot more value back into (Brookfield Place) and it’s a nice piece of real estate for us to have as our next strategic move in Perth,” he said.

Mr Wilkinson said he expected negotiations with tenants to intensify once construction was complete on the public realm, similar to what the developer experienced at Brookfield Place Tower 2.

“I’ve been coming every three or four weeks to Perth from Sydney and … I notice a lot more has happened and you can start to feel the public spaces and see how it’s going to lay out,” he said.

“Give that another couple of months and as that continues to transform, there should be a lot of interest … not just in the commercial and retail precincts there, but also the residential sites and the hotel offerings are going to get really strong support.”