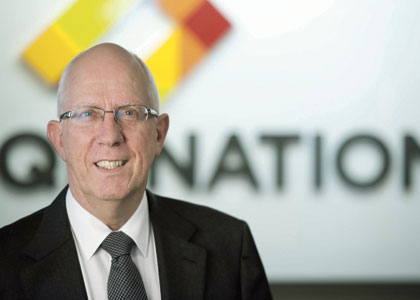 All COMERS: Lance Hockridge says QR National is a quality long-distance, heavy-haul operator, which gives it a competitive edge.

Rail freight operator QR National continues to voice its availability as an option to provide a multi-user solution that would connect developing iron ore ventures in the Pilbara to port.

Since listing on the Australian Securities Exchange in late 2010, the Brisbane-based company has openly said it would pursue growth opportunities in the state, which could include involvement in a fourth major rail line serving emerging Pilbara companies such as Atlas Iron and Brockman Resources.

The company, which has grown to be the largest haulier of iron ore outside of the Pilbara, highlighted its ambitions in the state last week when Karen Field and John Cooper were appointed to the company’s board as directors.

Mrs Field and Mr Cooper both have at least three decades of experience in WA working with companies in the mining, construction and engineering sectors.

QR National managing director Lance Hockridge told WA Business News the company was targeting work in the Pilbara that would benefit a multi-user environment similar to what it had established in the coal fields of Queensland.

“We know from all of the benchmark data available that we are a quality, long-distance, heavy-haul freight operator – what is different is that our core competitive advantage is in that multi-user environment,” Mr Hockridge said.

“When you think about it in Queensland: the number of source mines, the number of destination ports and you add in every other element … the degree of complexity goes up exponentially in being able to make the trains go round on an efficient basis.

“That is the nature of the opportunity we are exploring in Western Australia.”

Meanwhile, Fortescue Metals Group maintains that the rail component of its expansion project in the Pilbara to 155 million tonnes a year remains on schedule.

The company’s $US2.09 billion rail project is divided into two main work areas: the duplication of 120km of the existing main line and construction of the new 130km rail spur from the main line to the Solomon operation.

“Completion of the duplication works is on target for first trains in the quarter to September 30 2012 and the Solomon rail spur is on schedule for late 2012,” the company said in a report.

Also in the Pilbara, Rio Tinto announced planned investment in February of $US1.2 billion into its port and rail network, which forms a part of its expansion to 353mt/year.

In addition, the company outlined that it would spend $US518 million on autonomous trains for use in the Pilbara.

It is expected the first driverless train will be launched in 2014, with the AutoHaul automated train program scheduled for completion a year later.

The WA government has also cleared the way for Rio Tinto’s 53km railway to its Hope Downs 4 project, which it is developing in a joint venture with Hancock Prospecting. In conjunction, the government also approved a 220kV power line to the development.

BHP Billiton’s rail network in the Pilbara has continued to develop as the mining giant works towards expansion to 240mt/year, and a longer term outlook through its growth mines of 350mt/year.

The company last year unlocked its rail capacity by completing its transition to a dual track main line heading inland from Port Hedland.

BHP Billiton said the rail upgrade included 285km of double tracking, along with the construction of 10 rail bridges, the addition of 664 new ore cars and 18 new locomotives and improvements to signalling, controls and communication systems.

Independent open access rail provider Brookfield Rail, formerly Westnet, says it is on schedule to complete its two-year freight growth project that was outlined following the takeover by parent company Brookfield Infrastructure in the second half of last year.

Brookfield, which is solely a below-rail operator, is working towards increasing freight volumes on its 5,000km rail network from 55mt/year to more than 80mt/year.

The upgraded network capacity will significantly raise freight of iron ore to the Geraldton, Esperance and Kwinana ports, along with alumina and urea through Bunbury port.

Brookfield is also working to upgrade the line to the Esperance port and is installing extended crossing lines to enable longer trains.

In the Mid West, which is the company’s primary project at this time, Brookfield has completed 70 per cent of its upgrade of the rail that extends from Morawa to Geraldton port.

The rail is being transformed from what was previously a tier-three grain line to one that will facilitate the emerging iron ore mines in the southern part of the region, including the Karara Mining joint venture.

Outside of Brookfield Rail’s project in the Mid West, Karara is also constructing an 85km rail spur connecting to the rail company’s line as part of its project development.

“The first Karara trains are scheduled to run in December so this is all in preparation for that,” Brookfield Rail corporate development manager Paul Hamersley told WA Business News.

“We are running ahead of schedule and should be ready well ahead of when Karara has their mine ready to go.”

Iron ore mines being developed in the northern part of the Mid West would utilise rail marked out under the proposed Oakajee Port & Rail project.

Beyond the Mid West, Brookfield Rail’s focus will turn to the Yilgarn region and surrounding areas.

The company is working closely with government ahead of the proposed development of the Esperance port where, in conjunction, upgrades to the connecting rail will be required to support increased tonnage.

This followed a $2 million funding commitment a week earlier from the federal government for the project.

PortLink involves the construction of an intermodal terminal and rail realignment in Kalgoorlie-Boulder, along with a sealed road link between Wiluna and Meekatharra.

On the back of the state’s resources-led growth, the project was developed to support the higher demand for goods and services in WA that has resulted in a higher level of freight from the eastern states.