Pussy Cat Flats to the gulf

One of the fun aspects of travel is the unexpected – encountering people, places and activities that were not part of the original plan. 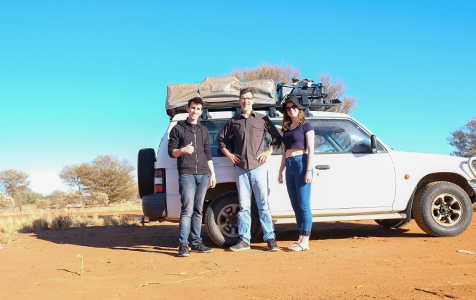 We’ve clocked up some big miles travelling from Darwin towards Cairns during the past week.

On my original loose plan, this section was meant to take three days. It was going to be ‘pedal to the metal’ as we drove through dull, arid country.

For the most part, it has been fairly dull countryside, but we’ve also had some fun encounters along the way. Julius and I have also been adapting to the grey nomad travel mode. Why rush when you can pull over early, and have a cuppa or a refreshing beer while chatting to other travellers? As a result, this section has taken six days so far, and it’s still 700 kilometres to Cairns.

As we were leaving Kakadu, I was intrigued by a very dodgy looking campsite that advertised a golf course. This was in harsh, dry climate where grass was a rarity. We weren’t all that interested so we drove on, only to discover another unexpected ‘resort’ soon after.

Pussy Cat Flats has a horse racing track, a rodeo ground, a tavern, a campground and a golf course. I insisted we look further, and ended up staying the night. The ‘resort’ is run by a couple from Lancelin, who were clearly enjoying life in the north.

Pussy Cat Flats has hosted horse races since the 1890s, though the scheduling is erratic. It has been a few years since the last race meet, so the owners expanded the campground to include the racetrack. It’s not every day you can set up camp on the main straight of an established racetrack, or bunk down next to termite mounds growing up and around the outer fence.

The next day we headed south to the historic Daly Waters hotel, via the hot springs at Mataranka. The hot springs were a bit like having a warm bath in the middle of a hot day, but somehow it was very soothing, helped by a scenic oasis setting. Daly Waters was the site of Australia’s first international airport, in the days when air travel was an adventure. The town only has nine permanent residents but its population swells every night when people stop off for dinner and a drink in the pub.

It’s an odd little place. The pub has thousands of items of memorabilia hanging from its walls and ceiling – old jocks, bras, sporting tops, thongs, caps, badges, name tags, foreign bank notes, stickers, stubby holders, even a set of hurling sticks. Ed, who runs the campground, rides a bike with a horse head on the handlebars. It has Australia’s most remote traffic lights, which are always on red and always ignored. It also has a traffic sign saying: ‘Angle parking, any angle’.

Like most businesses in northern Australia, it survives by hiring English and Irish backpackers for three-month stints. They are all very friendly, but hopeless when you are trying to find someone with local knowledge.

Daly Waters serves ‘beef and barra’ every night, and has a couple of singers and comedians to entertain; but our night took a strange turn when we met a Queensland couple and started talking about home brew. They didn’t stop at beer; they told us about all of the spirits they made in their home distillery. I was a bit sceptical, so they invited us back to their campervan and pulled out at least a dozen different spirits, all home made.

We started with Rocky Road, which really does taste like the chocolate bar, followed by whiskey and then Cointreau. I thought moonshine only existed in the US during the prohibition era, but it’s evidently alive and well. As much as we enjoyed the company and the drinks, I couldn’t help but wonder why anyone would need to bring that much alcohol on a camping trip.

Next day was a long drive, south to Three Ways, near Tennant Creek, then east towards Queensland. Not a lot to say about this – it was long and tedious. We stopped in Mt Isa – not much to say for this place either. Harsh terrain, harsh climate, and a giant mine and smelter right near the middle of town. Then we turned north back towards the Gulf of Carpentaria.

We drove near the same route that Burke and Wills had trudged many years earlier. Goodness knows how they survived as long as they did. It’s flat, desolate country that goes on and on. The most interesting event was the grizzled old prospector we met at one of our overnight bush camps. He cracked open his first VB and rolled his first smoke while I was having my morning cuppa; he proceeded to tell a few good stories, but my interest waned when he started repeating himself and then forgetting himself.

The gulf coast includes the neighbouring towns of Burketown, Normanton and Karumba, all of which claim to be the barramundi capital of Australia, so we thought that was a good place to try some fishing. We took a half-day charter from Karumba. We caught a few catfish, which were thrown back, and an undersize Spanish mackerel, also thrown back, then had a long spell when nothing was biting, but thankfully in the final 30 minutes the fish started biting. We caught three good-sized blue salmon, which we are taking to Cairns for dinner.

Nobody caught barramundi – apparently it’s the wrong time of year, and from talking to the cruise operator and other people who had spent two months at Karumba, it’s pretty rare to see anyone catch barramundi.

Coming back through Normanton, there was an interesting bit of history for business types. Burns, Philp & Co was one of Australia’s most prominent companies in the 1990s and early 2000s, involved in shipping, trading and food manufacturing. It was established in 1883 and its legacy includes some wonderful buildings around Australia. We discovered that the tiny town of Normanton hosted the company’s largest and most profitable branch in the 1890s, servicing mining, pastoral and fishing industries.

The Normanton depot is still standing, ironically a result of the town’s rapid decline after a short burst of prosperity.

From Normanton, it’s 700km to Cairns. Here we come.