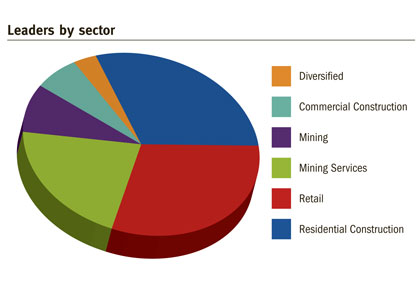 GROWTH: The resources sector's strength has carried over to the wider economy, fuelling growth in housing construction and retail.

WESTERN Australia’s leading private companies are under the spotlight now more than ever before.

Traditionally careful to keep to themselves, the massive growth delivered by the booming resources sector has brought attention to a market that was once considered too far for any but the most intrepid business traveller.

Not only has the boom created billionaires, the resources sector’s strength has also carried over to the wider economy, fuelling growth in housing construction and retail, areas with a significant presence of leading private players.

Recent trade sales of companies such as Giacci and Freo Group (see Private sales make early mark after quiet 2011) have underscored the interest in private businesses that have found themselves a strong niche in the resources supply chain or in direct mining contracting.

But under the spotlight isn’t always a nice place to be.

Gina Rinehart’s investment in the media, significant deals that further highlight her wealth, and a very unpleasant legal brawl with her children have attracted attention that she most likely would prefer to avoid.

Similarly, building magnate Len Buckeridge is mired in legal actions and bureaucratic battles linked to several major projects. He is fed up with them but backing down is not part of his character, especially when his opponent is a government agency.

In contrast, Wellard Group was just starting to shed its ultra-private stance when it found itself in the midst of the stoush between cattle exporters and the federal government.

Apart from BGC, ABN Group and JWH Group, all major homebuilders, other construction companies in the leading pack of private Western Australian businesses are Georgiou Group and Doric Group.

Most of these businesses are focused on Perth, although some have a regional presence thanks to demand from miners and energy players in the Pilbara.

On the retail side is the fast food franchises dominated by two players. Jack Cowin’s Competitive Foods is understood to be the largest franchiser of fast food restaurants in Australia, with brands including Hungry Jack’s, KFC and Domino’s Pizza.

Outside of that are car retailers John Hughes, DVG and Prestige Motors, which is part of the Perron Group. Perron’s retail exposure is twofold, through its WA Toyota franchise and its significant shopping centre ownership.

Perron also owns land and city buildings, which benefit from the flow of the resources boom.

Heavy equipment and truck dealer CJD Equipment is more mining oriented and would best fit with the resources sector. Barminco is clearly in this field and another company, Calibre Global, which was not included in the chart calculations on this page, is thought to have revenue of $500 million, which would place it among the leading private players.

While mining services has not traditionally been a big element of the leading private players, many mid-sized companies in this field have gone public in recent years and their results show that the field is lucrative.

A number of advisers in the financial field have warned that while demand for mining services is strong, there is a significant challenge for small- to mid-sized companies to deliver on contracts that require significant up-front capital expenditure and are beholden to multi-national customers.

Vantage Performance partner Simon Read recently told WA Business News he anticipated some hiccups for WA businesses in the next six to 18 months due to the pressure to contain costs from project managers.

“A lot of businesses in Perth are large unlisted businesses but they are dealing with multinational businesses, which are significantly different in scale and negotiating power,” Mr Read said.

Mr McIver said that created challenges from them to bring their systems and process up to speed to support bigger amounts of work.

With the IPO and debt markets difficult, these players were seeking alternative means of funding.

“Some companies are being funded by the likes of the big resources companies; they are offering them money up-front to deliver on contracts,” Mr McIver said.

“It is a form of advance payment.”

Alternatively, some were selling to multinationals, which appeared to be replacing the earlier consolidation driven by local players.

KPMG private enterprise partner and 2012 40under40 winner Agnes Vacca said labour and skills remained the biggest issue for businesses in the private sector.

Ms Vacca said the speed with which mining services was growing had created big problems for companies that did not manage their cash flow and tax obligations carefully.

“Managing cash flow is much more difficult as you make more money,” she said.

What is also clearer than ever is the number of issues big private companies have with government policy or bureaucratic processes that are hampering their ability to grow their business and profit from the results.

While many readers would be familiar with Ms Rinehart’s concerns about the mining tax and carbon tax, as well as Mr Buckeridge’s battles with the state regarding the Perth Arena and his plans for a port at Kwinana, one of the biggest surprises comes from a very quiet business that is only clearly a major private enterprise due to its staff of nearly 2,500.

Having spent at least $150 million in the decade ending July 2010 on building or refurbishing nursing homes, Aegis Aged Care Group, owned by CEO Michael Cross and fellow director Geoff Taylor of Taylor Woodings, has all but stopped investment in expansion.

Mr Cross blames federal government policy for the problems that are occurring at both the early and late stages of nursing care need – categories the government names as high and low care.

He said inadequate funding of low-care accommodation was creating changes in the market, while restrictions on the rules for funding accommodation for high care residents were simply out of touch with what people wanted.

“More and more people are staying at home but only as long as they can look after themselves,” Mr Cross said.

“The government thinks that is cheaper and pushes it, which means low-care residents are drying up.”

As a result, Mr Cross said his company had stopped expanding its facilities until policy was changed.

“I think it should be the biggest issue confronting Australia in the next 10-15 years with the doubling of aged care needs,” he said.

In its submission to a Productivity Commission inquiry on the subject, Aegis said the bond system that helps low-care residents fund entry into nursing homes needed extension to high care.

It is believed that CEO Mauro Balzarini travelled to Canberra to plead the industry’s case, along with other exporters.

Wellard is relatively constrained on this subject in its 2010-11 annual report.

“Wellard, working closely with other key producers and exporters, had a sustained program of engagement with all relevant political stakeholders, which resulted in a resumption of trade under new regulations,” the company stated.

The exporter also raised other issues linked to the federal government, including recent industrial relations unrest that has affected Australia’s ports for the first time in years, and changing protocols between the Australian and Turkish governments, which resulted in delays on one shipment.

Many of WA’s big private businesses were founded in the 1970s, reflecting the fact that the state’s wealth is relatively new and that some of today’s fortunes came off the first Pilbara mining boom of the 1960s.

Predating that is Hancock Prospecting’s registration in 1955 and the founding of Competitive Foods in 1960. Perron Group was established in 1963 and, while John Hughes Group claims a 1980s start date, Mr Hughes bought his first car yard in the early 1960s.

But there are some newcomers at the top of the list. Barminco was formed in 1989, as was Doric Group, DVG was established in the 1990s and Calibre came along in 2004. Quick Services Restaurant Holdings is less than five years old.

There are also some older companies that have stood the test of time.

Lionel Samson Sadleirs wins hands down as the oldest family-owned business in Australia, founded in the same year as the Swan River Colony.

Kailis Bros formed in 1926, and Craig Mostyn & Co was established two years earlier. Both have been involved with seafood.

Many of these older companies have roots linking them back to Italian and Greek migrants who settled here in the first half of the 20th century.