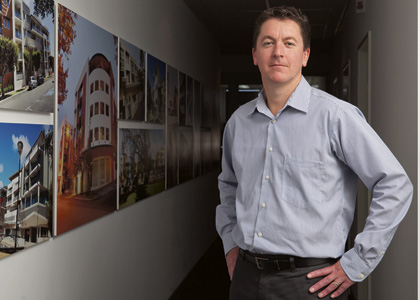 A RECENT upswing in buying activity, driven to a large extent by high rents and a tight market, couldn't have come at a more opportune time for mid-tier builder Psaros, which is preparing for the launch of its new off-the-plan inner-city apartment development.

Psaros is set to publically launch its MARQ development on the comer of Cambridge Street and Kimberley Street in West Leederville early next year, targeting construction mid-2013.

MARQ will consist of 58 one, two and three-bedroom apartments, with the price ranging from $449,000 for an entry level studio apartment to $815,000 for a three-bedroom penthouse apartment.

"What we have seen in the last 12 to 18 months is the rentals escalate exponentially and that's forcing Perth home owners into the market, as well as attracting investors, so there's a lot of demand for product/’ Mr Enslin said.

"The main demographic, we think, will be new starters. We also think we'll attract people from the surrounding area, be it parents helping their kids get into the property market or even some of the parents coming out of the area and downsizing, because there's some very high-spec product in here."

Psaros is due to complete construction at the sold-out Metropol on Parry complex by the end of the year, while sales have been strong at the company's other forthcoming development in Northbridge, MSquare.

With two train stations nearby and the Perth-to-Leederville CAT bus to launch in July 2013, Mr Enslin said the MARQ location met Psaros' strategic criteria as an affordable area in close proximity to the city and public transport nodes.

"It's interesting because we're in between Subiaco and developments we do in Mt Lawley and Northbridge and we find this market in between the two, both in terms of demographic and price range,” he said.

"This is semi-suburbia compared to what we're doing in (the inner city)."

Securing financing in the wake of the GFC has proved challenging for a number of smaller property developers, but Mr Enslin said Psaros' strong past performance had enabled it to avoid too many problems in this regard.

"We find that senior debt providers will talk to developers with a track record and we certainly tick the box on that front; we've always delivered on time and on budget and the financiers love that,” he said.

"The other aspect is to comply with their rules. Once you're past the first ticked box, we're very good at just doing what they ask in terms of time and budget and enhancing our reputation for honouring our commitments".

Mr Enslin said Psaros was likely to explore developments in Joondalup and Fremantle in the future but added that he was wary of expanding too far outside of the builder's inner-city base.

"Mandurah's a good example of (developers) getting overexcited about satellite towns and it costing them,” he said.

"The developments that we're doing outside of our core ... we do with caution and we normally structure a deal where we can de-risk it before we commit.”

Projects on Beaufort Street and Bulwer Street in Mt Lawley are to be announced early next year.