The collapse in the iron ore price is a stark reminder of how fast-changing market conditions require fiscal prudence, by governments, businesses and individuals. 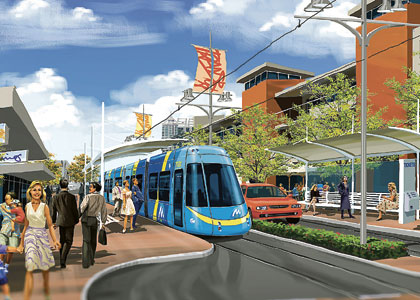 UNCOSTED: The Barnett government is talking up its light rail project but hasn’t prepared costings.

The collapse in the iron ore price is a stark reminder of how fast-changing market conditions require fiscal prudence, by governments, businesses and individuals.

THE collapse last week in the spot iron ore price, to less than $US90 a tonne, may be a short-lived blip, reflecting the tendency of markets to overshoot. But what if it isn’t?

What if the price stays south of $US100 per tonne, or even lower, for an extended period?

There will be major implications for the governments in Perth and Canberra, and for many businesses. A critical test will be their capacity and willingness to respond.

The state government will be hit particularly hard. In particular, its budget outlook will be shot to pieces, under the weight of falling iron ore royalties.

This year’s budget had assumed there would be a steady decline in iron ore prices, but not the sharp fall of the past week.

It assumed that the ‘effective’ iron ore price received by Western Australian producers – which adjusts for purity, moisture and freight, and is about $US25 per tonne below the ‘spot’ price for high-grade ore – would slump from $US146 per tonne in 2011-12 to $US127/t and $US115/t in subsequent years.

In practice, prices have fallen further and faster than had been expected.

If sustained, this would put a big dent in the estimated $4.26 billion in iron ore royalties due to be paid into government coffers this year.

The strength of the Australian dollar – the budget assumed it would average US99 cents this financial year but it is currently about US103 cents – will also weaken the government’s fiscal position.

This would turn the projected surplus of $196 million into a large deficit.

The federal government will also take a hit, with the Minerals Resource Rent Tax highly unlikely to raise $13 billion over four years, as originally projected.

Other states won’t be spared, because about 70 per cent of WA’s royalty income is redistributed through the Grants Commission process.

In the business sector, many aspiring iron ore miners will have to put their planned projects in the bottom drawer if commodity prices stay around current levels.

Existing miners will also have to rethink their growth plans, as their cash flow and profit margins are crimped.

Any slowdown in mining development will flow through to contractors, many of which reported record sales and profits last financial year.

Those most affected will be organisations – government or private – that have left themselves exposed, usually by carrying too much debt.

The state government has had a big run-up in debt in recent years, and that will reduce its financial flexibility in coming years.

Treasurer Troy Buswell has signalled that he is already looking for savings to ensure the government maintains its coveted AAA-rating.

He is doing that while trying to find funds in the state’s capital works program for new projects such as the light rail development unveiled last weekend.

This concept has enormous merit, and has been widely applauded. As such, the government should be commended for proceeding with the planning phase.

However, if the state continues to be financially constrained, the government will need to look more favourably on private sector funding of its infrastructure.

There are parallels with the situation facing iron ore miner Fortescue Metals Group, which has taken on extra debt to support its rapid expansion program.

With revenue being crimped, however, FMG has needed to find savings. It has already told the market it is evaluating asset sales, namely of power stations, and this week slashed spending on its expansion projects.

In tandem with these measures, FMG is still planning for longer-term growth opportunities, subject to an improvement in the iron ore market.

The optimistic view is that, once China completes its political transition in October, it will embrace increased infrastructure spending and growth will pick up again.

However it would be a rash person who built their plans, or bet their business, on that scenario.