Proud Beazley steps out the door

The outgoing governor and a self-confessed republican loved the busy job of being the Queen’s man in WA. 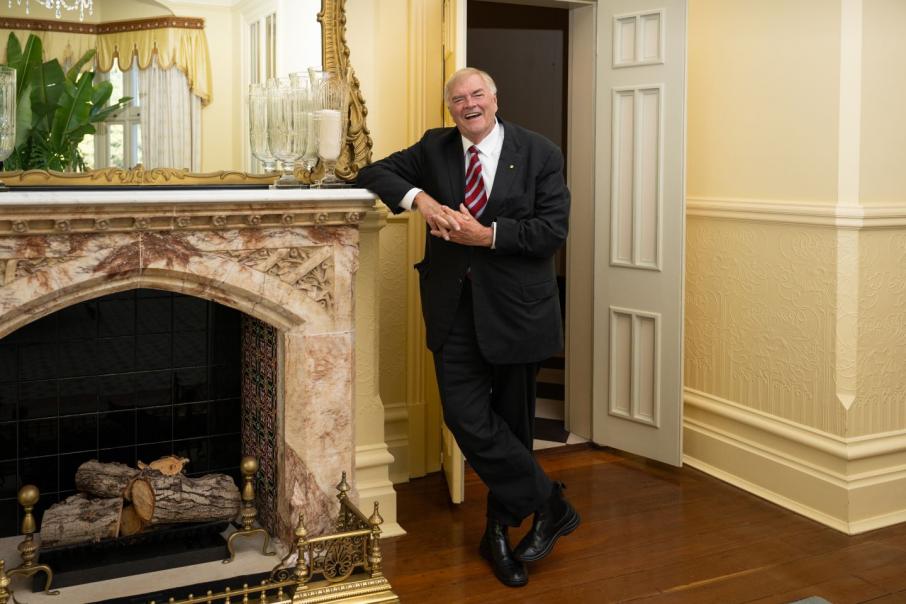 THERE is not a cloud in the sky, but the group of protesters who stand every morning on St Georges Terrace, at the entrance to Government House, were holding umbrellas over their heads for some strange reason.

They want the Queen’s representative inside, Kim Christian Beazley, to dissolve the state government because they object to its highly successful management of COVID-19.

Perhaps, once the virus threat has passed completely, someone should prepare a thesis exploring the pandemic’s impact on rational thinking.

But Business News did not come to the outgoing governor’s residence to discuss the pandemic.

Well, we did not intend to.

“I think we just about trebled the normal workload,” was Mr Beazley’s surprising response, when asked how the outbreak had curtailed his day-to-day operations.

“It made us more proactive rather than reactive.”

With the nickname “Bomber”, Mr Beazley was hardly about to squander his four-year appointment to the role of Western Australia’s governor in 2018, by sitting out half his tenure in forced or self-imposed lockdown.

In fact, Mr Beazley had a trump card up his sleeve should he need to pull rank.

“One thing that was pointed out to me was that it doesn’t matter what the law is, the governor cannot be prevented from going anywhere,” he said.

“It didn’t matter what the boundaries or borders were, I could go anywhere, but only by myself because that didn’t apply to any of my staff.”

To avoid further provocation of the umbrella people out front, Mr Beazley made clear he never used this freedom of movement mechanism and followed the rules like the rest of us.

“Instead of having two functions, for example, we would have eight, but we’d cut down the numbers of people,” he said.

“I therefore got to speak to more people in smaller gatherings.”

When intrastate travel restrictions were in place, Mr Beazley and his entourage would go where it was able.

He joked about visiting the Wheatbelt so often the communities thought they had their own regional governor.

Ahead of his final days as governor earlier this month, the former deputy prime minister, ambassador to the US and defence minister said he was “very sad” to be leaving the prestigious role, and his stately 159-year-old home of four years.

It sounded as though the self-confessed republican would have gladly accepted another term as governor had it been offered.

“I love the people here. I think we’ve been a little hard for them in the sense that we do a lot here.

“I asked the premier for four years and he delivered plus a few months, so, uh, out the door.”

He credited the driving force of his wife, Susie Annus, for achieving so much by way of events during the pandemic, and ensuring extensive refurbishment work was completed.

“In the course of our work, cracks kept appearing,” he said.

“We discovered this house had no foundations and it was splitting apart.

“We have foundations now, but there had to be a lot of silicon injections.

“This house is beautiful and definitely not built to contemporary standards.”

Sitting in the main reception lounge overlooking the meticulously maintained gardens, Mr Beazley reflected on an advocacy role he took very seriously during his time as governor.

For a man with a fierce intellect and sharp strategic mind, the debate about Australia’s future in the business of critical minerals and related rare earths is a no-brainer.

“I don’t hear it said often enough, but this state is the world’s greatest minerals province,” he said.

“We’ve hardly scratched the surface of what we’re capable of.”

As comfortably as any expert in the field might be, Mr Beazley ran through the science and geopolitical arguments for ensuring WA becomes the rare earths supermarket for the free world.

“People do not understand that while the vast bulk of these rare earths are processed and exported by China, the alternative world supply is WA,” he said.

“We could probably, if we exploit what is here, replace China’s output.

“Even though China is the biggest producer now, you have the biggest rare earths mine in the world here: Lynas.”

The Mt Weld mine near Laverton produces more than 60,000 tonnes per year of rare earth concentrate for a growing list of products consumers now take for granted.

But Mr Beazley is looking far beyond the tiny amounts of lithium needed to fuel mobile phone batteries.

He’s looking at the big picture.

“So, this is an incredibly big deal, but we don’t give rare earths the systematic strategic attention that other countries like China and Russia do.”

As a governor, with close ties to the US national security community from his days as Australia’s ambassador, Mr Beazley has been shamelessly pushing WA’s rare earths capacity.

He pointed to the AUKUS trilateral security pact signed between Australia, the UK and the US last year, to emphasise WA’s potential in the critical minerals space.

“If AUKUS is worried about the self-sufficiencies of the three countries, then they could get critical minerals here,” he said.

“We have done four years of non-stop propaganda on this, pouring out into two directions: the US and Canberra.”

The 73 year old’s infectious passion for cementing Australia’s place in the world is at its most magnetic when discussing the military threats, real or perceived, which we face.

“You have to ask yourself a basic question,” he said.

“If we were in a conflict, are the airbases established across our north hardened? There would be a serious question over that.

“Have we got fuel stocks that could withstand the early phases or war? There’s a question over that. If we looked at ammunition supplies if conflict broke out [it’s] problematic.”

His optimism lies in our alliance with the US and the deterrent factor that has for any potential aggressor.

Mr Beazley is relaxed in believing the superpower would come to Australia’s aid.

“And if the US was to turn up, the other guy might not have a country,” he said.

Before leaving Government House, and walking back past the umbrella brigade, Business News wanted to know whether the 33rd governor had changed his mind about the need for Australia to become a republic?

“People asked me why I, a republican, took over the role of governor,” he said.

“I’m a republican and I’m also a democrat, and I take the view that the Australian people will determine what the structure of their government will be.”

And what will this man of the people do once the boxes are unpacked at the more modest Beazley family home?

“I say to people I’m going back on the tools,” he teased.

In other words, the Bomber won’t be taking a back seat.