More than 60 protestors have converged on the site of the state government’s $126 million Ocean Reef Marina development, demanding that the proposal be reconsidered. 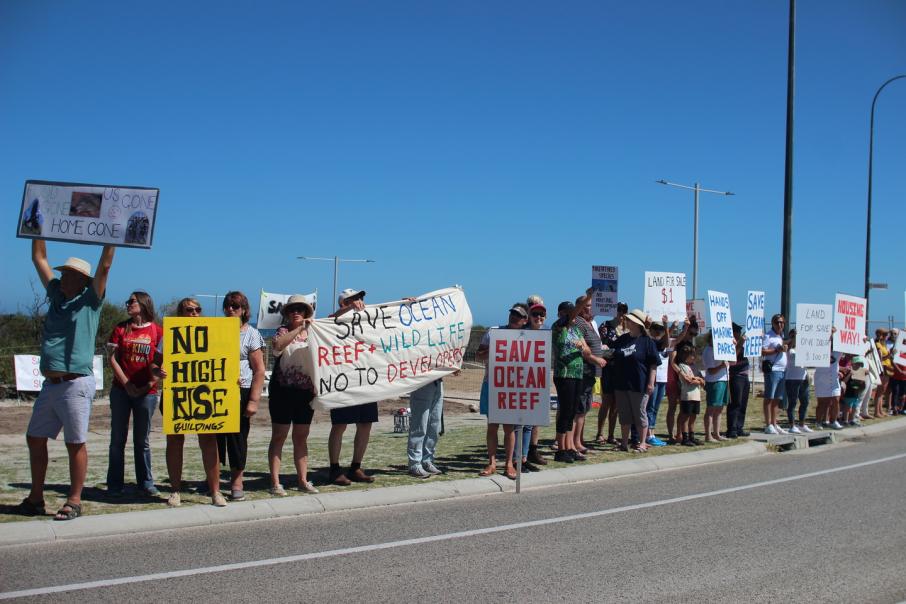 More than 60 protestors have converged on the site of the state government’s $126 million Ocean Reef Marina development, demanding that the proposal be reconsidered based on its environmental impact.

But the development, initially proposed several decades ago, requires the clearing of almost 25 hectares of vegetation and the relocation of more than 100,000 Roe’s abalone from the four-kilometre reef.

The rally, spearheaded by the Ocean Reef Citizens Group, came just days after the City of Joondalup reviewed the business case for the project, which is being handled by state development agency DevelopmentWA.

Group member Sue Boylan encouraged attendees to stand up and voice their concerns about the impact of the proposal when the business case was released for comment.

“The business plan is going to be released for public comment and I would encourage each and every one of you to stand up and say no,” she said.

“We need to start getting letters sent wherever we can to make them see that this isn’t on.

“The destruction of that reef is environmental vandalism and it is non negotiable.”

The proposal received approval from the Environmental Protection Authority in 2019 after being subjected to a full public environmental review, the highest level of environmental assessment.

The approval was granted on the basis that the developers adhered to strict conditions, including the implementation of development monitoring and management plans to minimise the impact on the adjacent beaches, flora and fauna, the rehabilitation of 5ha of onsite bushland and the improvement of reef habitats in the Marmion Marine Park.

Environment Minister Stephen Dawson reaffirmed that decision just last month when the decision to issue a clearing permit for the former Bush Forever site was appealed.

According to the state government, the project is expected to deliver a $3 billion boost to the Western Australian economy, support 94 local businesses, and create up to 8,600 construction jobs.