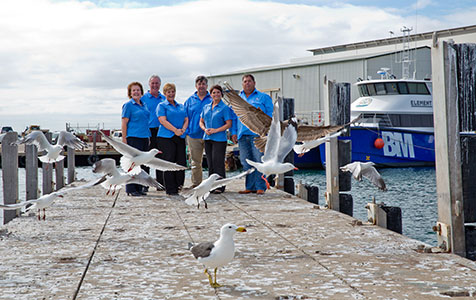 WATER WORLD: Bhagwan Marine has grown from a one-vessel operation in 2000 to now having a fleet of 70. Photo: Graeme Gibbons

A flexible approach to business and staying true to its values have been the keys to the success of Bhagwan Marine, which has become a major service provider to the offshore oil & gas sector.

Geraldton-based Bhagwan Marine has undergone rapid-yet-controlled expansion since 1998, when the Kannikoski family decided to convert their cray boat for work in the petroleum sector.

The business notched up turnover of $120 million in the past financial year and has increased its fleet to 70 vessels – impressive growth that has led the business to being named the Business News Rising Star of 2013.

At the core of its growth, managing director Loui Kannikoski says, are the company's unflinching dedication to innovation and a focus on developing a supportive workplace culture, values that have been fundamental to its success.

Its operations are focused on Western Australia's north-west, and in the past couple of years the business has moved into the Northern Territory and Queensland.

Mr Kannikoski told Business News there were no plans to curb growth and expects the Bhagwan Marine fleet to surpass 100 in the near future.

"We're always looking to grow, but keeping in mind as well that we're very careful about not moving too quickly, Mr Kannikoski said.

"The industry at the moment is heavily weighted towards the construction activity, construction lasts for a period of time and then we're going into production and maintenance," Mr Kannikoski said.

"The construction era is great but that will come and go, whereas production and maintenance will keep us going into the future."

The vessel is currently being built in Singapore, for completion in March next year, after which it will be available for immediate use on a contract with Apache.

"It's a bit of a game changer for us," Mr Kannikoski said.

"We're never scared to go into different parts of the industry and do purpose-built vessels. We like to think outside the square a little bit; this vessel is completely different to what is considered the norm.

"Some people think we're mad and all the rest of it, but we do try and come in with some different answers and different ideas for certain jobs."

Mr Kannikoski said the foresight and flexibility to deliver to specific client needs was a characteristic fundamental to the company's success.

"We are quite keen to try and build vessels for certain tasks instead of trying to adapt old vessels that have been built for a different purpose and trying to make them fit, so that's maybe how we're different from the rest," he said.

The company now employs more than 450 workers and was planning to increase that significantly to support further growth.

Mr Kannikoski said while those employees were the business's best asset, sourcing labour had been Bhagwan's greatest challenge.

"There is only a limited number of people in Australia with the right skills, so we're all trying to drink from the same pool when it comes to people – that is an ongoing challenge," he said.

The business has placed significant importance on recruiting people from local areas, and making sure the culture of the company – even down to its family values – are instilled in new recruits.

That's meant having managers visit regional locations at least every three weeks, while the executive management team travels at least once a month.

General manager Andy Cowan was recruited about five years ago and said the company's culture was replicated in every section of the business, as were steadfast systems and processes.

"Having good strong systems implemented across our fleet has enabled us to cope with the growth; training people into how those systems operate gives us a fair bit of consistency in what we do," he said.

"You walk onto one of our vessels and then go on to another and you'll see the same systems and set up, so it makes it easier for anyone who's moving between vessels; that's one of the things that helps us with maintaining that growth – just the culture and understanding of how the systems work."