Rumours of a New York-based investor spending big in Margaret River have circulated for some time. As part of a wider look at offshore interest in the region, Mark Pownall found the man prompting all the talk.

John Streicker might have scotched the most fanciful part of the speculation surrounding his growing investment portfolio in Western Australia’s South West, but the truth hardly diminishes this fascinating business tale.

No, Mr Streicker did not react to the September 11 2001 terrorist attacks in his hometown by seeking the furthest international airport from New York.

The World Trade Center disaster did, however, play a key role in how a man who runs one of Amercia’s largest property empires – some 62,737 apartments in a portfolio worth $US5 billion – ended up buying land in the Margaret River region, namely the Yallingup Protea Farm and the Bridgeland vineyard.

After the terrorist attacks, the Streiker family abandoned plans for a trip to Syria and Lebanon for their annual Christmas holiday, changing their destination to Margaret River.

This was a fateful move.

“Towards the end of a very enjoyable stay in Margaret River, and as I often do when I’ve had enough vacation, I asked a local real estate broker to take me around and show me some properties so I could get a better understanding of the market,” Mr Streicker said.

Six months later he acted on that move and acquired his first land in the region.

“In retrospect, I am much happier growing grapes in Margaret River than figs in the Bekaa Valley,” he said.

That first purchase, though, wasn’t just grapes but 80 hectares of land with vineyards and a flower farm.

“My buying the property was driven more by my wish to make a real estate investment in Margaret River than by my interest in viticulture or horticulture, areas in which it would have been kind to call me a rank amateur,” Mr Streicker said.

Like other, more wine-focused investors before him, the wily real estate expert saw similarities between Margaret River and California’s Napa Valley of 40-50 years ago – before the US region’s land prices boomed on the growing popularity of wine in the US.

“There are similarities in lifestyle with the Napa Valley; a sense of sophistication combined with a strong rural character that makes Margaret River a very appealing destination,” Mr Streicker said.

“With each visit I have become more enthusiastic about the area and its remarkable lifestyle and potential.

“The investment also had some interesting peculiarities.

“To me, the fact that it was both a flower farm and vineyard was very attractive, but the combination may have discouraged local investors who would probably be looking for one or the other.

“I saw it is as a valuable diversification.”

In addition, there was additional development land as part of the package and solid off-take contracts, which helped provide as much incentive as the strong US dollar did.

“Having made the first investment I found myself more and more involved with the business of growing and selling grapes and flowers,” he said.

“Most sensible people would learn the business first and then make the investment, but I deal with pension fund money all day with its attendant responsibility to be prudent, so I felt I could be a little less responsible for my own account.

“As it turned out, now that I am involved I find the businesses fascinating, both flowers and grapes.

“I am extraordinarily fortunate to have superb managers and staff, and as we have been developing the 40ha pasture, the decisions on which varieties to plant, how to develop water resources, trellising, drainage, land use and all the other issues have been an enjoyable learning experience.

“As I learned more and visited more, it was inevitable that I would eventually purchase another property in Margaret River.

“And when the opportunity came up to acquire one, I felt far more comfortable in my ability to evaluate it based on what I had learned and the people I had met.”

Mr Streicker visits WA three or four times a year – most recently in October – leaving behind his New York-based Sentinel business, which is ranked as the 11th biggest apartment owner in the US, a country where the majority of people rent rather than buy.

In May 2003 Mr Streicker paid $7.5 million for the Bridgeland vineyard. The 200ha property in the Margaret River appellation has a troubled history as part of a failed tax-effective investment scheme, and then as an asset of the defunct Hotham Wines company, which was taken over by Australian Wine Holdings.

“This vineyard is under a long-term lease with a major Australian wine company [AWL] so it is much more a financial and less hands-on investment,” he said.

“Currently, I have a third vineyard under contract in Margaret River, but it is still in the due diligence process so I can’t discuss the details.”

Mr Streicker said his bullish, long-term view on Margaret River, and Australia in general, was based on a couple of things.

Australia’s world-class financial institutions and active investment, capital and real estate markets, (with a shared language, compatible legal system and similar business culture) make the country an excellent environment in which to invest. “These and other characteristics make cross-border investing between our countries easier than almost any other combination of countries,” he said.

Margaret River has enormous appeal as a destination resort as well as a high-end agricultural setting.

The favourable exchange rate. “I can’t be sure that the recent strength of the Australian dollar can continue indefinitely,” Mr Streicker said.

Some of these factors have also prompted Mr Streicker to take an interest in US-Australian investment beyond his own personal holdings.

He said he had a team of people from Sentinel set to visit the east coast to promote interest in institutional investment in US real estate, which was increasingly attractive for Australian investors following the revision of tax treaties earlier this year.

“Australian individuals and institutions have a much higher propensity to invest in real estate than do those in the US,” Mr Streicker said.

“I don’t know how all of this will play out – whether we will be able to help your institutions invest in US real estate, or whether I will reach a level of immersion in Margaret River that will enable me to help my US clients invest here.” 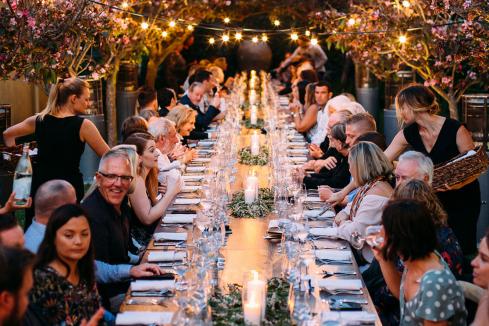