A wide range of commercial property developers, from multinationals to church groups, are set to drive future activity in the sector. 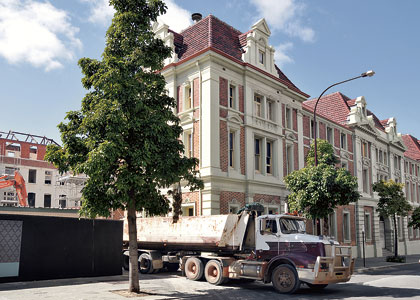 UNDER WAY: Mirvac has started early works on the 33-level office tower to be built at the Old Treasury development. Photo: Grant Currall

A wide range of commercial property developers, from multinationals to church groups, are set to drive future activity in the sector.

DEVELOPMENT activity in Perth tends to come and go in waves, and it looks like that pattern will repeat.

Office towers Allendale Square, St Martins Tower, and 140 St Georges (still best known as the AMP Building) were all completed in the mid 1970s and defined the city at that time.

BankWest Tower, Central Park, the QV.1 Building and Exchange Plaza were completed in rapid succession in the late 1980s and early 1990s, and all became city landmarks.

The most recent wave has seen the completion of another batch of buildings that have redefined the city.

BHP’s new head office at Brookfield Place has reshaped the city skyline, while Bankwest’s new office at Raine Square and the 140William office tower have given the city centre a new north-south axis.

Those projects have proceeded at the same time as several large apartment developments, from Equus on Barrack Street to the Fairlanes and Queens Riverside projects at the eastern end of the city.

The completion of most of these projects has resulted in a large increase in the supply of premium office space and inner-city apartments, but that hasn’t stopped work on the next wave of developments.

The next phase is unlikely to be as large as the previous one, but is sure to once again redefine the city, in large part because of the added influence of large-scale government-backed redevelopment projects.

In the city office market, a handful of developers are working hard to get the next high-rise office development out of the ground.

In the apartment market, sector leader Finbar is pressing on with its growth plans, while Frasers Property Group is continuing to invest in Queens Riverside (see Apartment developers look for investor boost and Principled approach gives Finbar an edge).

Plans for Perth’s largest hotel at the Crown casino complex, and a major government push for new hotels in the central city, look set to add to development activity.

Retail groups Coles and Woolworths, along with the healthcare sector and government, are also adding to property development activity across the state.

For specialist property developers, the critical factor that will determine which projects proceed is the ability to lock-in leasing commitments.

“There is very little, if anything, that will happen on a speculative basis,” Colliers International director of office leasing David Cresp told WA Business News.

“The banks won’t finance it.”

“We’ve come off a major supply round, with in excess of 300,000 square metres coming onto the market,” he said. “We’ve ended up with a 4 per cent vacancy rate, which is pretty amazing. We’re now gearing up for the next round.”

Of the many projects in the offing, two are generally put at the front of the queue.

Mirvac has already started early works on the 33-level office tower to be built at the Old Treasury development, and Brookfield is expected to follow soon after with its Brookfield Place South development.

The Mirvac tower will be anchored by the state government, which has leased 98 per cent of the office space for a period of 25 years for a new judicial complex.

The tower is one of several developments under way or planned at the heritage precinct.

Refurbishment of the Public Trustee building at 565 Hay St is under way, while demolition of the Playhouse Theatre has started and will be followed by demolition of the Law Chambers building, to make way for a new city library.

Works have also commenced within the Old Treasury Building, which will become a boutique six-star hotel to be operated by international group Aman.

The common link between all of the parties involved in this project is FJM Equities boss Adrian Fini, who has been working on development concepts for the site for more than a decade.

However it remains to be seen exactly which companies participate in the development.

When the current concept was unveiled in 2010, CBus Property was named as part of the development consortium.

CBus Property subsequently exited the project, allowing it to focus on its 140William property, which has a mixed track record.

The office tower is fully occupied by state government agencies but the retail section has been a failure, prompting the announcement last month of a new strategy aimed at making the property a “lively urban village of bars and restaurants”.

Separately, Mirvac announced last month a conditional contract to sell a 50 per cent interest in the office tower to Singapore investment company, K-REIT Asia, for $165 million.

Mirvac has also adopted a new construction strategy for the tower, as reported last month by WA Business News.

It had been running a tender process, with Broad, Doric, Probuild, Multiplex, and BGC all submitting expressions of interest.

Mirvac subsequently decided to award the work to its own construction arm, under a fixed price design-and-construct contract.

Canadian group Brookfield has made no secret of its desire to proceed with the new tower, located next to its 45-level Brookfield Place skyscraper.

It has obtained development approval and, like other aspiring developers, is seeking to lock-in anchor tenants.

A big selling point for Brookfield Place South is that it is the only advanced office project with river views.

Tenants with a longer-term horizon could wait for new office developments to proceed at Elizabeth Quay.

Oil and gas giant Chevron is widely rumoured to be evaluating the potential for developing a new Australian headquarters at Elizabeth Quay.

A development of that scale would be welcomed by the state government, which has invested a lot of political capital in Elizabeth Quay.

But for businesses looking to lease office space in the next two to three years, the options are either Brookfield Place South or several other projects located further north.

The Perth Diocesan Trust is believed to be close to finalising plans for its property at 200 St Georges Terrace, which will include nearly 11,000sqm of office space and 2,000sqm of retail connecting to Hay Street.

The Diocesan Trust is also the developer of the Public Trustees building on Hay Street, which will deliver 7,645sqm of refurbished office space to the market.

Together, these projects would make the trust one of the largest developers in the city.

Another source of competition is Leighton Properties’ Kings Square development, on the site of the former Perth Entertainment Centre.

This campus style development will include up to four buildings, anchored by an 11-storey, 18,000sqm office building.

There is a high degree of certainty around this building proceeding.

Much more speculative is the 30,000sqm office tower Luke Saraceni has been working on at 396 Murray Street.

Diploma Group, which has problems of its own (see Back to basics approach for Diploma rebuild) has often been named as developer and part owner of the Murray Street project, but was in fact the development manager and builder.

The Murray Street project is just up the road from Raine Square, which was Mr Saraceni’s largest project but led to his Westgem group being placed in receivership.