Projects in danger of falling over as patchy conditions bite

Doubt has been cast over a wave of proposed apartment and hotel developments, with a patchy sales market forcing developers to apply for extensions to planning approvals for hundreds of millions of dollars’ worth of projects. 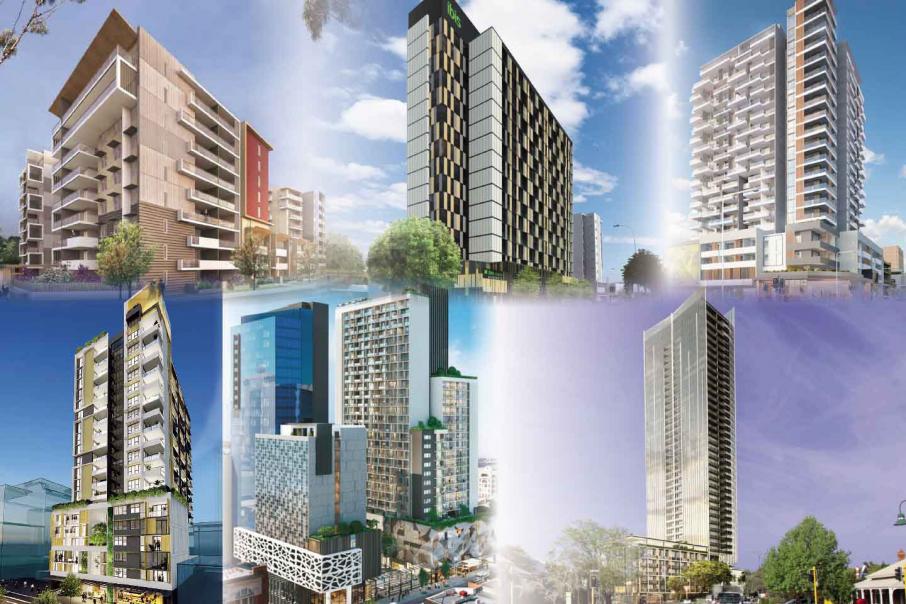 Developers are experiencing significant challenges getting projects up in Perth, illustrating not all approvals lead to completions.

Doubt has been cast over a wave of proposed apartment and hotel developments, with a patchy sales market forcing developers to apply for extensions to planning approvals for hundreds of millions of dollars’ worth of projects.

Since October last year, applications to extend planning approvals for more than $300 million worth of developments in the City of Perth have been lodged.

Two of those projects have been proposed by Stirling Capital, which lodged an application in October to extend its approval for its Verdant development, located at 74-78 Stirling Street.

Verdant, which has an estimated end value of $80 million and a base construction cost of $38 million, is proposed to be a 19-storey tower containing 136 apartments.

Stirling Capital initially began marketing the project after it was approved by the City of Perth DAP in November 2014, but one month before that approval was due to lapse in November last year, the developer was forced to apply for an extension.

The application proposed minor changes to the project’s design as well as a 12-month extension to its approval.

Stirling Capital cited the struggle to meet a minimum pre-sales requirement to obtain development finance as its reasoning behind needing an extension.

An amended application was approved for the development in February last year, while Stirling Capital lodged paperwork for a 24-month extension to the project’s approval on March 10, suggesting a sales campaign launched in March last year has not been successful.

On nearby Beaufort Street, Chinese developer Zone Q Investments is marketing a 23-level, 184-dwelling development known as Nspire 108, which was approved in August 2015.

Zone Q is understood to not be making as much progress on presales as it would like, and there is some doubt as to whether the project will proceed before its approval expires in August.

Stirling Capital’s and Zone Q’s experiences are in stark contrast to Blackburne’s Oracle project located at 105 Stirling Street, which was approved around the same time as Verdant, in November 2014.

In March last year, Blackburne’s construction contractor Probuild began work on the 22-storey tower, which is due to be completed by the end of this year.

Cirque was approved in October 2015, and will be developed in two stages, with enough of the 111-apartment first stage sold to enable the developer to start construction. The second stage, which will comprise 121 apartments, is still being marketed.

Urbis director David Cresp said while an extension application was not necessarily a death knell for a project, it was not surprising to see developers apply for them in current market conditions.

“Across the board, everything is taking longer than it would in a more normalised market, and in the current market, the two years that you get on a standard development approval is not a long time at all,” Mr Cresp told Business News.

One of the bigger projects where a developer has applied for an extension is at Fragrance Group’s NV Apartments on Murray Street.

The plan was approved in June 2015, and was given a standard 24-month period in which to substantially start construction, otherwise its approval would lapse.

Fragrance Group applied for an extension to the project’s approval last month, sending shudders through the market, but last week it appointed construction contractor Probuild to carry out the works.

Probuild will mobilise to site in July, with the $200 million build due to be completed by late next year.

Local developer Pindan Capital has not been as successful as Fragrance Group, with a development approval at 52 Lord Street understood to have lapsed midway through last month.

Pindan had been planning a 214-apartment development, known as Alto, with a sales value of more than $100 million at the site, which is home to a Kmart Tyre & Auto Service operation.

The project was originally approved in March 2015, and was given a standard two-year period to be substantially under way.

Pindan Capital general manager Scott Davison declined to comment on the status of the project’s approval, but did confirm it was not part of the developer’s immediate pipeline of works.

“We are comfortable sitting on this site at the moment, as we have good national tenants in the property providing solid ongoing revenue from the property.”

Others were withdrawing developments from the market after failing to achieve presales.

“We are actually seeing the lack of projects, or the difficulty in projects getting presales, as a problem in a few years’ time,” Mr Cresp said.

“This is the peak year of completions because we were in a pretty strong market a couple of years ago, so the projects that got presales then are under construction and are coming to completion this year.

“What’s probably going to be seen is there is going to be a shortage of new supply in a couple of years’ time, because the number of projects that go to construction this year and next is going to be well down on what we’ve seen in more recent years.

“It is a market where you want to be careful as to who the developer that you‘re signing up with is, what their track record is, and then make your own assessments for how likely you think that development will be completed.

“It does make it hard for buyers as well as developers, that not everything that gets proposed is going to come to completion.

“That again leads to the issue that we’ll have a problem in the future, that we’ll get to a market where there isn’t enough supply coming through.”

The tough conditions are not restricted to the city centre, with developers in South Perth plagued by slow sales, and the uncertainty over the suburb’s planning guidelines.

Finbar Group said earlier this year it had to scale back its largest-ever project proposal, the $400 million Civic Heart, blaming changes to South Perth’s planning regime for derailing its sales campaign.

The developer had originally planned to begin marketing the development by the end of 2015, but the City of South Perth’s attempt to reinstate height limits across the suburb at the end of that year tripped up that plan.

“It was lucky that we had the foresight 18 months ago to get the DA (development approval) extended for a year,” Sirona Capital managing director Matthew McNeilly said.

“Once this planning uncertainty reared its head, we quickly did that on the basis that we didn’t know how long it would last, and it lasted certainly longer than anyone would have liked.”

Sirona Capital applied for another extension to its approval for The Glasshouse last month, but the developer withdrew that application before it was assessed by the metropolitan central DAP, following a recommendation from South Perth planning officers that it no longer fitted in with the suburb’s rules.

Mr McNeilly said the project’s approval would not lapse until March 2018, which would likely give the developer enough time to secure presales for a project start.

“The market in South Perth is ok, sales are certainly happening,” he said.

“Now that we’ve cleared that town planning uncertainty, there is a much better opportunity for achieving presales.

“Our overall thesis hasn’t changed – we believe in density, we believe there will be future demand for apartment living and we see South Perth as an extraordinarily good, strong market for apartments.”

Mr McNeilly said Sirona Capital was also working on an alternative scheme for its South Perth site, should it not achieve the presales necessary to start construction.

In East Perth, a pair of proposed hotel projects illustrates the patchy development market is not restricted to apartments.

At 69 Adelaide Terrace, Rehawk Property Group applied to develop a 16-storey, 200-room hotel in July 2013, and by midway through 2014, had lined up an operator in Ibis Styles.

Ibis brand owner Accor announced to the market the hotel was likely to open in mid-2015, but in April of that year, Rehawk successfully applied for an extension to its development approval, pushing out the date for the project to be substantially started to July 2016.

However, before that start date, Rehawk submitted another extension application, amending the project to be an 18-level hotel with 252 rooms.

The application was approved, giving Rehawk until July 15 to begin construction, but late last month it lodged yet another extension application, casting considerable doubt over whether the project will go ahead.

While there is still a glimmer of hope for the Ibis Styles proposal, a Holiday Inn Express project flagged to be built at 257 Adelaide Terrace appears to have fallen over.

The project, put forward by Hotel Development Pty Ltd, was proposed to comprise of a 20-storey, 224-room hotel that was to be built by early 2015.

Approval extensions gave the developer until April this year to substantially start work, however, Hotel Development Pty Ltd was deregistered as a business name by the Australian Securities and Investments Commission in August last year, effectively putting the kibosh on the proposal.