SPECIAL REPORT: Western Australia may not be ready with the workforce and skills needed for the next boom. 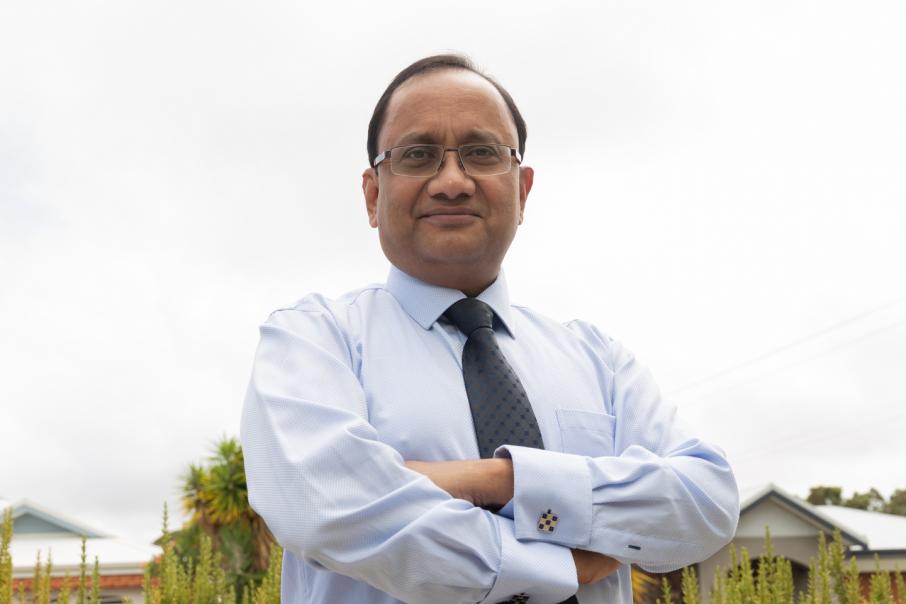 Partha Dev says there is a lot of talent ready to return to the oil and gas industry. Photo: Gabriel Oliveira

Western Australia may not be ready with the workforce and skills needed for the next boom.

AS far as problems go, high demand for skilled workers is probably a good one to have.

It’s a sign Western Australia is finally lifting out of the stagnation that has beset the economy for years.

But it could well mean the $95 billion of resources, infrastructure and building projects in the pipeline, according to BNiQ Search Engine, face familiar cost pressures.

“Within civil construction, demand will be high this half for candidates with a rail background who can work on the Metronet project,” the briefing said.

“The strongest hiring pace in more than four years is anticipated in the first quarter of 2019,” Manpower’s report said.

That was two percentage points higher than the same time in 2017. 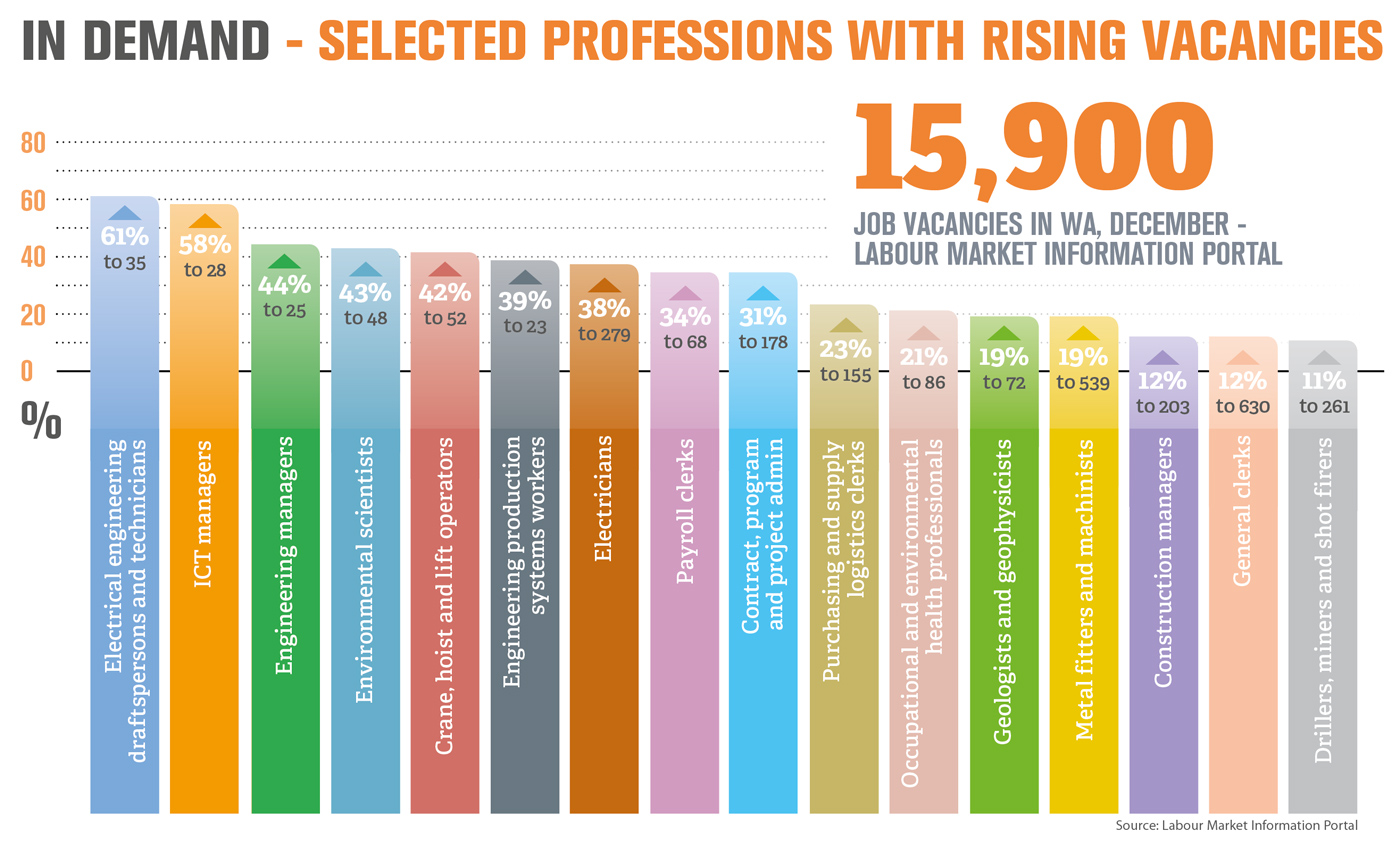 Vacancies were higher in a range of fields, with positions available for electrical engineering draftspersons and technicians, ICT managers, engineering managers and environmental scientists all having large increases (see graphic).

Chamber of Minerals and Energy of WA chief executive Paul Everingham said there would likely be skills shortages by the end of the year or early next year, although not as acute as during the previous boom.

Mr Everingham said resource expansion projects in the pipeline were already putting a lot of demand for skills into the market.

But there were differences in approach this time.

“Looking at the way iron ore and oil and gas companies, commodity houses, have done workforce planning, mine planning, reservoir planning, there’s been a massive amount of lessons learned from the last boom,” he said.

“The companies have been working with Tafes, universities, job providers, labour hire groups, contractors … to really get much more factual information about demand into the system so that providers are ready.

“You’re already seeing the benefit of that.

“There’s been no huge wage breakout with the announcement of (major) iron ore expansions.”

He said he was very optimistic about WA’s position.

An additional issue was strong demand from the east coast coinciding with the upswing in WA.

“If it’s a skilled job in the construction industry, we’re either facing a shortage now, or we’re going to be,” Mr Graham said.

“It’s only going to get worse.

“This time, there’s more competition for WA in the national infrastructure market.

“Construction managers, civil engineers, these are fairly mobile occupations, and they’re in high demand in New South Wales and Victoria.

“The scale of their infrastructure activity just dwarfs WA.”

Rail in particular was quite a highly skilled, niche capability, he said.

There were shortages in other parts of the market too, particularly apprentices.

The familiar issue for apprenticeships was the time lag between supply and demand to match skills, he said.

“At a trade level … there’s an extreme shortage of heavy duty plant mechanics and mechanical fitters, both of these are support skills to keep the machines running,” he said.

He acknowledged capacity and capability issues for public projects would translate into higher costs for taxpayers.

But there were some positives in all this, Mr Graham said, with relief on the way for contractors after years of being squeezed.

“When there’s more activity out there, contractors think ‘maybe I can put a reasonable bid in there and make some money’,” he said.

One of the issues in the previous boom had been that too many projects were run simultaneously, particularly in oil and gas, Mr Dev said.

That meant many people had been fast tracked into project management without suitable experience in the industry, often from other sectors.

Since then, many good people had been lost in the recent downturn.

“I’ve seen people of my experience or more, in the last few years, they’ve been forced to either drive Ubers, or they’ve … prematurely retired from the industry,” Mr Dev said.

“When the crunch came, all these experienced people … we got rid of the cream.

“(And) every graduate that came out (of university) was either without a job or without a role model.”

That had been demoralising for many, he said, and many young people either did not pursue engineering or headed into other parts of the industry.

Mr Dev, who is also playing a role in the upcoming Australasian Oil & Gas Exhibition & Conference in Perth, said industry professional bodies had taken the lead in trying to re-engage experienced people to mentor the next generation, getting in early ahead of the next surge of projects.

Although projects around the world would often go over budget, Australia was probably well above the industry average, and was notorious for it, he said.

There were other issues that could be resolved to help ease cost pressures, Mr Dev said.

“A global problem that’s even more prevalent in Australian projects, (is) bespoke requirements,” he said.

“I’ve been on both sides as an operator and a service provider.

“There’s inconsistency, differences in specifications for equipment, the service providers had to reinvent every time.”

Mr Dev said organisations such as Engineers Australia were working to resolve these problems through encouraging standardisation.

That meant participating in international standards bodies, and equally, ensuring that requirements for the unique environment of the state’s north west, compared with the North Sea or Gulf of Mexico, were factored in.

Mr Everingham highlighted two other issues the state would need to grapple with to keep costs competitive for projects.

Regulatory ‘creep’ was one major problem.

“In my six months in the job (it’s) been the single concern most raised with me,” Mr Everingham said.

“(It’s) not just the time it takes to get mining and environmental and related approvals, (it’s) also duplication.”

An example was the Labor opposition’s plan for a federal Environmental Protection Authority.

“Every state has an EPA, what’s a federal one supposed to do?” he said.

It may not in itself discourage projects, but it added to headwinds.

“You can paint a scenario that could see certain projects, particularly greenfields, struggling to get finance and get over the line.”

Then there was the issue of stability and certainty in royalty regimes.

“Sudden rapid changes or increases can do significant short to medium-term damage to project viability,” he said.

Recently proposed controversial regulatory changes to another primary industry, the Western Rock Lobster fishery, have served as an example.

“More than a dozen of my members have said ‘wow, they didn’t see that coming’ to the rock lobster industry, it makes you realise you’ve got to be alert,” Mr Everingham said.

“Foreign investors, they’ll just look at other jurisdictions ... they have that many different countries and regions they can invest in.”