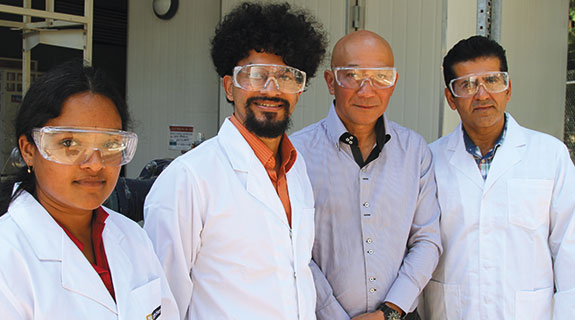 When CITIC Pacific Mining wanted a fresh perspective on some of the technical challenges at its giant Sino Iron project in the Pilbara, it opted for something different.

CITIC signed up to the iPREP program, which was launched last year by Edith Cowan University.

The program, which has quickly gained support from all of Western Australia’s public universities, is like a matchmaking service for businesses with a problem and PhD students wanting commercial experience.

Professor Chubb said science and ICT students in Australia were being disadvantaged by a lack of industry experience to help them prepare for the workplace after graduating.

“We need industry and universities working better together to prepare our future workers to innovate, collaborate and adapt,” he said.

The iPREP program operates across all disciplines, and in many cases the participating businesses deliberately seek out students from different disciplines.

CITIC joined the iPREP program to help address technical issues at its $10 billion Sino Iron project, which includes its own power station and desalination plant.

The general manager of the desalination plant, Patrick Lee, said a consistent supply of water was critical to its downstream processing operations.

“Like desal plants across the world, we’re in a constant battle against the corrosive impact of seawater on plant and equipment,” he said.

“These students provide a fresh set of eyes, identifying types of corrosion, causes and materials that might slow the effects.”

Murdoch University’s Sridevi Brundavanam had been studying magnesium implants for orthopaedic applications, Dario Delgardo, also from Murdoch, had been working on the development of catalysts for hydrogen generation, and Curtin University’s Mansoor Ghezelchi was studying in the field of chemical engineering.

Mr Lee said he was impressed by the way the students quickly adapted to life on site, and their ongoing work at Curtin’s corrosion engineering centre.

CITIC was keen to build stronger links with local universities as it progressively commissioned the Sino Iron project, one of just two producers of magnetite concentrate in WA.

“We’re at the forefront of a new downstream processing industry for Australia,” Mr Lee said.

“Our project is big, integrated and complex, with plenty of opportunities for young, inquiring minds.”

Software firm Lateral came to the iPREP program with a very different approach.

“We looked at areas where the adoption of innovative technology will improve over the next five or 10 years.”

He said Lateral had been in business for 30 years and was always looking at ways to get into new areas.

“It’s an investment for us,” Mr Weerakody said.

“It’s good for the brand and it’s also stirred up thinking inside our organisation.”

As part of Lateral’s engagement with universities, he said, it participated in a survey commissioned by the Office of the Chief Scientist.

“We’ve been looking at ways to engage with the universities so their graduates are a better fit for our needs,” Mr Weerakody said.

The survey results, released in August, found several barriers to ‘work-integrated learning’, including lack of incentives in universities to find placements, lack of capacity in business to provide meaningful experiences, and lack of communication between the two sectors.

Employers who responded to the survey said the cost of supervision and administration was a barrier, and wanted a process that made it easy to engage with universities.

ECU research training manager Natasha Ayers, who coordinates the iPREP program, said it was designed to address these issues, with the universities doing all of the administration.

Participating businesses simply make a one-off payment of up to $10,000, depending on the number of students and type of engagement they want.