Western Australian utilities are boosting the state government’s budget bottom line, partially offsetting falling GST and royalty revenue, according to the latest round of annual reports submitted to state parliament. 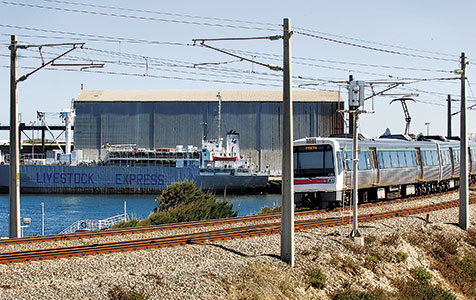 INFRASTRUCTURE: The state’s ports have performed strongly, but public transport is heavily subsidised.

Western Australian utilities are boosting the state government’s budget bottom line, partially offsetting falling GST and royalty revenue, according to the latest round of annual reports submitted to state parliament.

In the 12 months to June, Water Corporation led the way with a $487 million dividend and $324 million of tax equivalent payments, which under the National Tax Equivalent Regime are payable to the state government.

The corporation also received $566 million in subsidies for unprofitable services, meaning in net terms, nearly $250 million flowed from Water Corp to the government.

Synergy more than doubled its dividend to $84 million after doubling net profit after tax.

The energy retailer also paid $45 million in tax equivalents in the year following its merger with Verve, while reducing its net debt by nearly $450 million.

Western Power has not yet announced a dividend for 2013-14, which will be paid in this financial year, but it achieved a 6 per cent increase in net profit after tax to 203 million.

The state government’s financial policy suggests Western Power will pay a dividend of 65 per cent of that figure.

Western Power, which owns and maintains the state’s electricity grid, cut operating expenses by more than $50 million over a two-year period in a significant efficiency drive.

The Public Transport Authority performed poorly, recording a loss of $208 million, despite drawing more than $712 million in operating subsidies from the state government.

The government contributes more than three times more in subsidies for public transport than the authority raises through user charges, meaning that the price of a ticket is significantly discounted.

But news was not all bad in transport, with substantial increases in the state’s exports aiding ports to deliver record performances.

Port Hedland Port Authority led the way with net profit of more than $110 million, more than double the figure for the 2013 financial year, with an additional $47 million in tax equivalent contributions.

The most recent state budget forecast around $1.5 billion of income from public corporations, also known as government trading entities, around 5 per cent of total consolidated revenue, for the upcoming financial year.