WHEN John Pica bought in to the Garden City franchise of global hair reduction specialists, Hairfee, in September 2007, he was sure he had chosen a winning business. 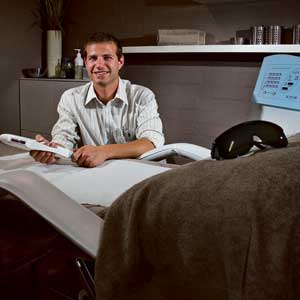 WHEN John Pica bought in to the Garden City franchise of global hair reduction specialists, Hairfee, in September 2007, he was sure he had chosen a winning business.

It was only when he and long-time friend Steve Marchese decided to buy a second Hairfree clinic, in Claremont, that the difficulties of growing a small business became evident.

"By September this year, the Hairfree Centre Claremont was losing money rapidly and the clinic's reputation in the area was basically diminished," Mr Pica told WA Business News.

"[The] Claremont clinic wasn't making money, but with the catchment area that it presents, along with the clinic's prime location, it seemed like a challenge worth stepping up to the plate.

"Buying in to a business that wasn't able to gross half of its required amount to break even, well, it would seem like madness to some.

"But I saw this as a challenge, especially after having established Garden City as now the top-profiting Hairfree centre in Western Australia in only just one year."

Under the previous owners, Hairfree Centre Claremont was often grossing $27,000 a month. When Mr Pica and Mr Marchese purchased the clinic, the business was turning over just $7,000 (for September).

Within weeks of the purchase, Mr Pica and Mr Marchese began an internal employee overhaul, changing the clinic's therapists and implementing a bonus system for remaining staff, offering a monthly bonus if strategic targets were achieved.

"Continuous training for our therapists is of paramount importance for our new clinic's growth and sustainability moving forward," Mr Pica said.

"When the clinic opened two years ago it was making three times over breakeven ($15,000 a month); then the profits disappeared and the clinic started to lose a lot of money," Mr Pica said.

"The reputation and trust with its clients was ruptured...we needed to get things back on track, then ensure clients that the change of ownership has bought a new style of business and a modernised outlook on the way it is run.

"The therapist is the face of the clinic. I have always been a firm believer that if the therapist is well qualified, motivated and mature, that the business will turn a profit.

"The ability of the therapist to sell the service to clients is the key to sustainability and growth in the business.

"If the therapist is not motivated, the face of the business will deter growth as profits dwindle, as they did in the past.

"After employing two new staff for the business, the business is actually seeing a remarkable pickup in bookings on the Hairfree calendars."

The centres are increasingly targeting a male client base, with about 30 per cent of customers using the treatment being men. Globally, the franchise services about 1 million people every month.