Profile - John Gladstones is Putting the ‘s’ in success

Research into plant disease and breeding led John Gladstones to viticulture and fostered the beginnings of the wine industry in the South West. 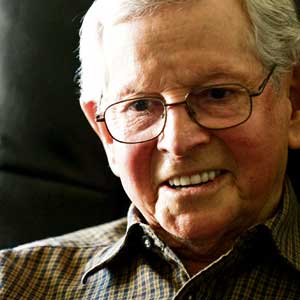 SCIENTIST, botanist, viticulturist, plant-breeder, pioneer, author, academic, award winner and a genuinely nice bloke - a fitting description for one of the most important influences on the Western Australian wine industry, John Gladstones.

Just don't make the mistake of misspelling his name.

"We're a bit sensitive with that."

As one of the country's most respected viticulturists, and the man credited with uncovering the potential of the Margaret River wine region, Dr Gladstones' pioneering research into lupins, clovers and vineyards, and their interaction with the environment has spanned more than 50 years.

He even has a line of longitude named after him - the Gladstones Line. Unfortunately, the first map featuring the line got it wrong.

"The initial map that had it on didn't have the 's' on the end either," Dr Gladstones says.

But he is far from upset with the publishers of that initial map, which helped determine the current WA wine regions.

He was tasked with defining the wine regions in the state's South West due to his extensive research into climatology, soil types, crop physiology and crop ecology, gained from his time with the University of Western Australia and many years with the Western Australian Department of Agriculture.

He selected the longitude 115º 18', which runs just west of Busselton to form the eastern boundary of the designated Margaret River wine region.

"In 1994, when it was decided to initiate a system of geographical indications, I had been working on the book [Viticulture and Environment] ... so I had some fairly definite ideas about what would be the natural regions of the state," Dr Gladstones says.

"I toyed with various ideas of how to define it, based on soil types and so on and in the end it seemed better to have it as simple as possible."

It was a simple solution to a complex problem, which is a theme consistent throughout this 77-year-old's professional life. And he's showing no signs of slowing down, with a second book in the pipeline.

Dr Gladstones' first book, Viticulture and Environment, is the premier reference book for viticulturists the world over, and the catalyst for his receipt of the Special Distinction in Viticulture by the Office International de Vigne et du Vin in Paris.

"That's the world governing body of viticulture and winemaking in Paris, I'm very proud of that," Dr Gladstones said. "The better part of 20 years' work went into it."

Surprisingly, this invaluable contributor to the wine industry never really had vineyard research in his sights. His focus was on lupin research, which grew into eradicating disease in species of clover that eventually led to viticulture.

It was his relationship with legendary winemaker, Jack Mann, and Houghton Wines in the Swan Valley led Dr Gladstones to viticulture.

While working on his university thesis in 1954, Mr Mann gave Dr Gladstones a vineyard out at Houghtons where he was able to undertake his research on lupins.

During his lupin research he began investigating regions in WA that would be best suited for grape growing.

He released his first paper on the advantages of Margaret River in 1965, while his second report, in 1966, suggested the climate in the area could be uniquely suited for production of winegrapes of the highest quality.

"It could've been a disaster but fortunately it does seem to have turned out, actually remarkably close to forecasts."

It's this attitude that has led to many labelling Dr Gladstones a pioneer, a title he is proud to wear.

"I really wouldn't be interested in doing anything if it wasn't pioneering," he says. "If others are doing the same thing or even worse have already done it, there's no great deal of point in doing it."

You have such an impressive background; is there anything you don't do?

There are a couple of things I don't do; one is anything on a computer. The only thing I've ever done is I did get a bit of information off the internet, and I also got a couple of CD-roms from America with climate data which, with great difficulty, I managed to access. And the other thing is statistics. I have no time for statistics whatsoever.

I think developing the lupin crop is the biggest one. Nowadays it's not the one I'm best known for and in fact there was never a big hoo-ha made about it because largely it just slotted automatically or easily into the farming system. It fitted so well that it was just accepted; and it was the same with the oestrogen-free clover. It was so logical that you didn't have to make a big noise to get funding for research. There was natural acceptance.

How big an impact do you think you've had on the WA wine industry?

That's a very difficult question to answer. On the superficial level you could say a very big impact, because the consequences of the developments of Margaret River have been tremendous. Now, they probably would've occurred eventually, but maybe not for a long time