Andrew Carter is inspired by his unique creative niche in the world of visual arts. 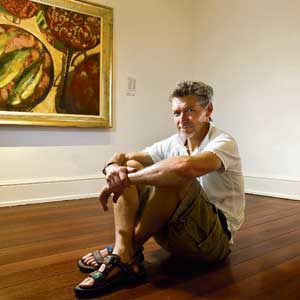 BY his own admission, Andrew Carter says it is extremely difficult to make a living in the highly competitive world of visual arts.

But Mr Carter is a success, thanks to a simple application of time honoured business principles.

"It's a very old concept, like Rembrandt and Venire and all the other artists in the old days."

Mr Carter no longer enters competitions or holds exhibitions, rather the commercial outlet for his work is the 105-year-old Pilot's Cottage next to the heritage listed Roundhouse.

"In the visual arts if you want to be a painter you have to find an agent, or a gallery, and then that gallery has to represent you, and then you need to win competitions and the critics need to like you," he explains.

"When they do start to exhibit your work you'll get a show every one or two or three years and in between times you can be left alone for long periods of time.

"You lose huge commissions, it can be up to 50 percent of the gross sale, plus all of the costs on top of it.

"I thought, what we need is our own building, and a place that's in the right position so that I can have a studio and at the same time, have an outlet for the sale."

That location is key to Carter Studios' success, as the Roundhouse can be visited by up to 650 tourists and sightseers each day.

"For a studio gallery it's almost ideal, I don't know of a better position," he says.

"We're not advertising, it's not competing with the existing system, it's completely different.

"I'm not taking people from other galleries, but I'm attracting people who normally wouldn't go into those spaces."

Mr Carter has been producing art for the last 30 years, enjoying a successful international career as a production designer before turning to full time painting.

Mr Carter's father was an academic and a concert pianist, and his mother was an opera singer.

In 1979, Mr Carter graduated from Curtin University with a degree in industrial design, and was accepted one year later into the Master of Fine Arts program at Yale University in the United States.

Along with collaborations with major dance companies in Australia and Europe, Mr Carter was the production designer for the closing ceremony of the 2002 Manchester Commonwealth Games, and also designed the opening of the 2006 Games in Melbourne.

He has also designed for arts festivals around the country, including the Perth International Arts Festival.

Among the various accolades Mr Carter has won is a visual arts fellowship from the state government in 1997, and despite this success, Mr Carter says his studio represents the highlight of his career.

"The most rewarding thing I've ever done is to come in and do exactly what I like painting and support my family," he says.

"I've won a fellowship from the government, which is a really good award, I've designed for the Royal Ballet in Covent Gardens, when I got accepted into Yale that felt like the single most exciting thing, and the adventure of going to such a prestige place for three years is hard to top, but it was sort of just a stage for me."

Mr Carter says by having his own creative outlet in the studio it allows him to focus on producing artwork without the external pressure of creating under a theme for a gallery, attempting to win government grants or holding exhibitions.

"So much of our lives is about trying to scamper for these few crumbs that are thrown out, so the people that run the symphony orchestra, the opera company, the ballet company, the theatre company, all of these arts organisations are always trying to come up with a way to survive and it dominates the mechanism of those companies too," he said.

"There's more emphasis on trying to stay alive through beneficiaries than there is on producing the art sometimes."

Around 35 paintings hang from the walls of the Pilot's Cottage, and Mr Carter aims to sell 26 of these paintings each year, at an average of $6,000 per piece.

Due to the unique nature of the gallery, Mr Carter has found demand for his work has remained unaffected by the gloomy state of the world economy.

"We've become recession proof it seems, theoretically there's an 80 per cent downturn in art sales across all the commercial galleries and we're growing," he says.

"I don't know why, except to say it's probably that it isn't competing, it's not trying to be anything else.

"The paintings aren't decorative paintings to hang on your wall as a picture, they're not an accessory in that sense, people come in and get attached to the paintings, they feel like they just have to have them."

And Mr Carter respects that it is the unique niche Carter Studios inhabits that has allowed the gallery to become a success.

"There's all sorts of ways to make lots of money out of this fabulous site, but we've turned them all down and stuck to that one thing," he says.

"That is, to be a studio gallery where you could only buy one-off, original works of art that take months to paint and that you get to see the working studio in the process.

"It's a bit of a response to a world obsessed by cost instead of value."

Who, or what is your inspiration?

I'm very inspired by Fremantle, Australia and history, and painters up until the 1960s. My paintings are all done in layers so I can put layers of the past up to the present.

What has been your most rewarding role?

My greatest achievement right now is making a living out of something I have a complete passion for and looking at my home life where there's my wife and kids, completely supported by this industry of art. It's not about winning green room awards or other things like that, its just being able to be a painter.

What'S your favourite thing about living in WA?

I was born in the country here, I had the chance to stay in Europe or in America to work and I realised I can't because my soul is here, and you can't paint, or write about what you don't know. It just happens to be a really nice place to live.

My wife and I like to camp down south, we've been all over the world but ultimately we like to disappear, four wheel drive into the wilderness and live in a remote place for a while, like down past Cape Arid, past Cape le Grande and even further. Anything that involves lots of physical activity is my idea of a great holiday.

What item could you absolutely not live without?

Besides my family? That's very hard. I don't think I have one, I think I've released all materialism.