ANNIVERSARY SPECIAL: Professional services firms in most industry sectors in WA have increasingly become aligned with international groups. This article is part of a special series to mark Business News' 25-year anniversary. 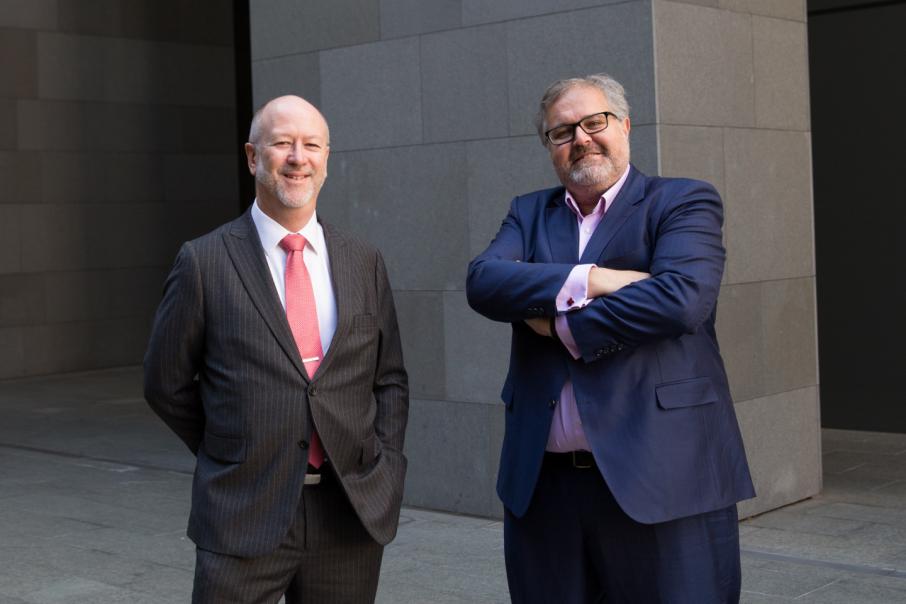 ANNIVERSARY SPECIAL: Professional services firms in most industry sectors in WA have increasingly become aligned with international groups. This article is part of a special series to mark Business News' 25-year anniversary.

Lawyers, accountants, advertising executives and insurance brokers generally don’t get lumped in together but they do have something in common.

Increasingly these professional services firms in Perth are owned by or aligned with bigger international players.

This trend does not apply to all professions.

The major stockbrokers, architects and public relations firms in Perth are, in most cases, still independent, locally owned operations.

The changing profile of all these professions is laid bare by a review of data collected by Business News for its BNiQ Search Engine.

The data shows wide variations in the growth of each profession between 2001 and 2018.

The accounting sector has enjoyed the most rapid growth over this period, with the big firms at least doubling the number of professional staff they employ.

The accounting firms have also become increasingly diversified, with data scientists being the latest specialist discipline they are seeking.

The major public relations firms in Perth have also expanded over the past 17 years, though this dataset misses some large shifts in the intervening years.

PPR dominated the industry through the 2000s and had about 40 staff at its peak, with many of these in its investor relations team led by David Tasker. It has shrunk to a fraction of its former size, however.

The biggest player in this space now is Cannings Purple, with 29 consultants.

The big firms in most other sectors have achieved little, if any, growth.

The major law firms, for instance, are mostly smaller now than they were in 2001 as their clients keep more work in-house and technology reduces the need for staff.

Stockbroking is another sector to have shrunk, as share trading increasingly moves online.

The major players in this space, including Patersons Securities, Hartleys, and Euroz are increasingly focused on building funds under advice rather than share trading, while also originating deals through their corporate finance teams.

The legal profession has arguably seen more change than any other.

The major players federated with east coast firms in the 1980s, integrated financially in the 1990s, and in recent years linked with global firms.

About 20 international firms have moved into the Perth market over the past decade.

One of the first movers was Norton Rose Fulbright, which acquired Deacons in 2010.

Another early mover was UK firm Allen & Overy, which poached more than a dozen Clayton Utz partners in Perth and Sydney.

The strategies employed by local firms have been highly varied.

Freehills joined up with UK-based Herbert Smith in what was essentially a merger of equals.

Mallesons Stephen Jaques linked up with Chinese firm King & Wood but has not proceeded with a full merger.

Allens has formed a strategic alliance with London-based heavy hitter Linklaters but is seeking to maintain its own brand identity.

Several prominent international firms have opted for a gradual entry to the local market, based on recruiting the right people.

The targets for the international firms have fallen into two camps: complex litigation that has followed the end of the mining construction boom, and work on the next wave of big resources projects.

The global players have been joined in Perth by multiple east coast firms, such as HWL Ebsworth, Mills Oakley, Gilbert + Tobin, Hall & Wilcox and Gilchrist Connell.

Amidst all the change – and despite dismissive sneering by competitors – Perth-based Jackson McDonald and Lavan (formerly Phillips Fox) have maintained their ranking as two of Perth’s largest law firms.

Insurance broking is another sector to have been shaken up by the entry of big international players.

The likes of Jardine Lloyd Thompson and Marsh have been in the Perth market for many years.

The spate of acquisitions meant that EBM, which was founded in Perth in 1975, is the only locally owned player among the leading insurance brokers in WA. 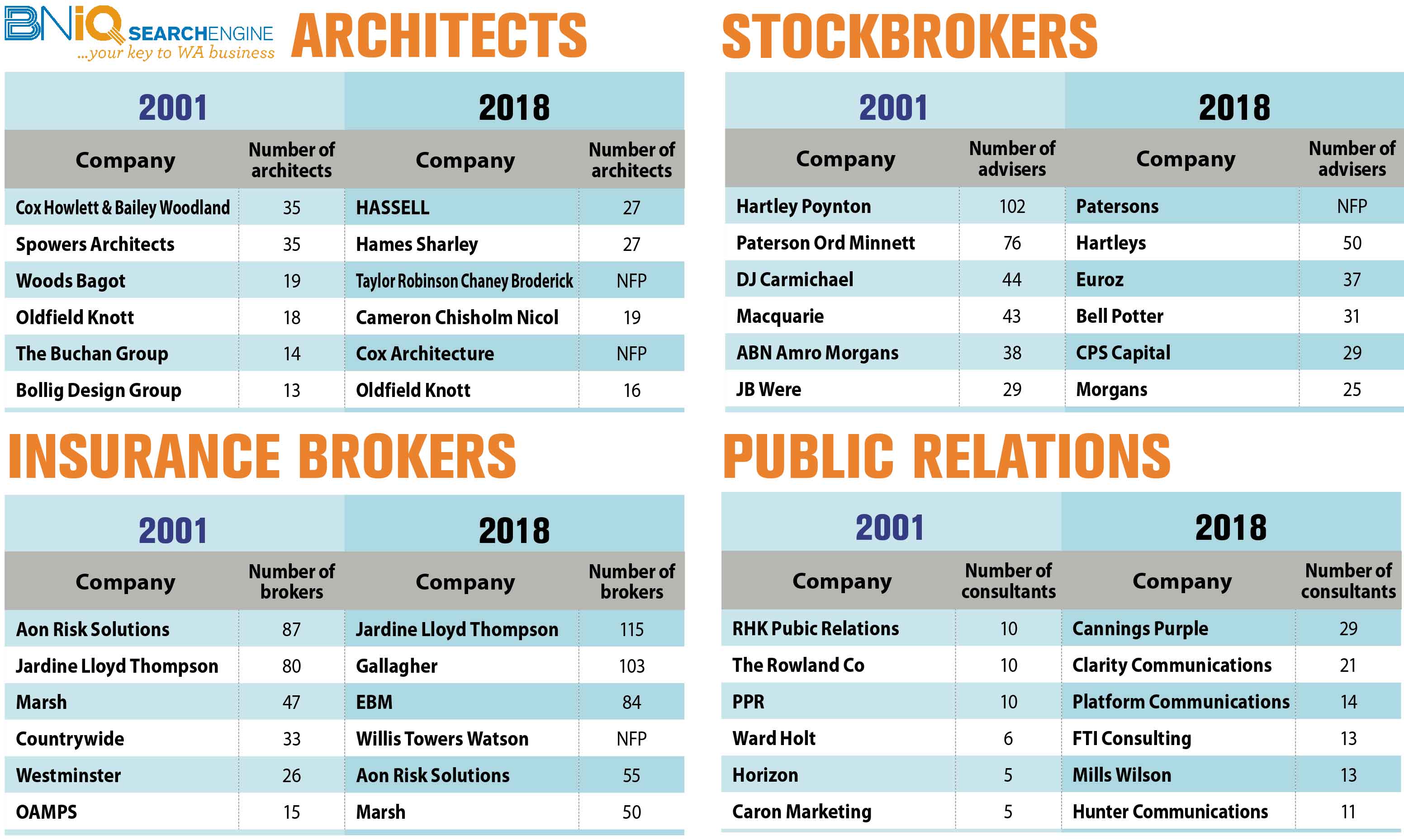 Another sector with strong national and international links is advertising.

Other big advertising and media agencies also have international links.

Marketforce, which for many years was the WA market leader but has shrunk in recent years, is part of the Clemenger BBDO Network.

Key events have included the merger of Arthur Young and Ernst & Whinney in 1989 to create Ernst & Young, now trading as EY and the largest firm in Perth.

Similarly, Price Waterhouse and Coopers & Lybrand completed a global merger in 1998 to create PricewaterhouseCoopers, which trades as PwC.

EY’s profile as the largest accounting firm in Perth (measured by staff) contrasts with its number three ranking nationally (measured by revenue).

It was helped locally by the 2002 collapse of Andersen, which resulted in five of Andersen’s 10 partners moving to EY. 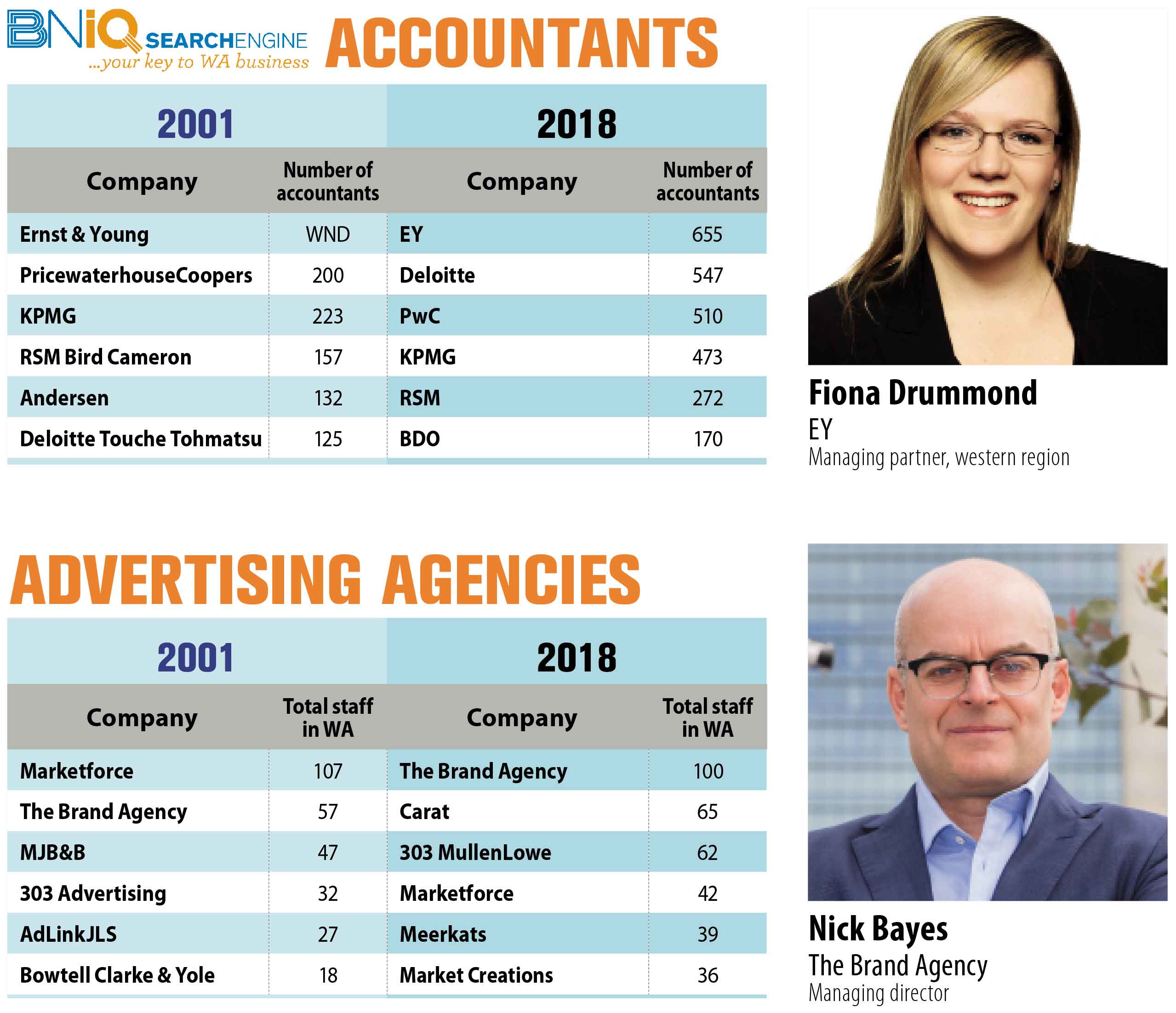 Among the mid-tier firms, RSM has consistently been the biggest in WA.

It is followed by BDO, which boosted its WA profile in 2010 when it secured five PKF partners, and again early this year when it merged with Tomkins Turner Corporate Advisory.

Mergers and acquisitions have not defined the architecture profession to the same extent as other sectors.

The largest player in Perth is HASSELL, which was founded in Adelaide and has built an international presence.

Its local practice, led by Peter Lee, evolved from the former Spowers Architects.

One local firm that is an exception to the M&A rule is Taylor Robinson Chaney Broderick.

It was formed this year from a merger of Taylor Robinson, Chaney Architecture and Broderick Architects and is ranked as the third largest firm in Perth.