Productivity not the panacea pollies profess

How we view ‘productivity’ may need to change in an increasingly uncertain economic climate. 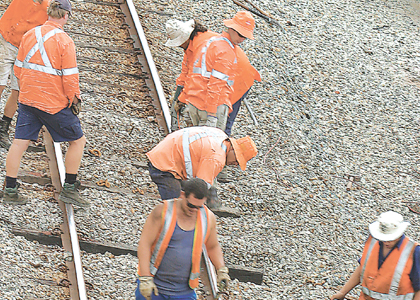 How we view ‘productivity’ may need to change in an increasingly uncertain economic climate.

BUSINESS leaders and politicians are increasingly fast and loose in their use of the word ‘productivity’.

It is understandable that - particularly in a nation where there is a shortage of labour and difficulty firing below-grade workers - business and political leaders throw this word around like some sort of panacea to the inevitable problems that arise in such a robust economy.

Plenty of people would agree that productivity has to improve if Australia is going to remain competitive internationally.

But productivity is not a oneway street. Just like ‘misogyny’, the meaning that is attributed to it in common parlance may not be quite correct.

In the case of productivity, most who address the wider community would mean that we have to get smarter, using our existing workforce to do more. Some would mean that requires more flexibility in the workplace in terms of hours worked or conditions, while others would consider productivity gains are made by having the same workers do more using technology.

Very rarely do those involved in these discussions seem to countenance another possibility; that productivity can also mean the same amount of work done by fewer people.

Of course, both the flexible workplace and technology arguments actually mean that - they’re just a positive spin on the outcome by assuming that our workforce will be able to do more.

That is great in theory, but when an economy slows generally there is not likely to be additional work going around. Instead, employers try to rein in costs by reducing head counts and getting fewer people to do the same workload.

Clearly we are arriving at that moment in our economy. As the emphasis shifts from building capacity at speed (with little apparent regard for cost) to a more stable operational phase (where a focus on costs will be constant), we will see more staff shed.

This is not all bad. Compared to a decade ago, there will be a lot more people employed in Western Australia on relatively higher wages. The variety of work is also greater. But businesses that want to thrive and prosper in this changing environment will no longer be able to pay the high rates they have been offering to get the job done in more recent times.

Regrettably, the harsh side of the productivity equation in such an environment is that few people are willing to accept a pay cut to do the same job. For some reason that kind of productivity improvement seems indigestible compared to laying off a percentage of staff and having the remainder do more work than they were before.

This is the downside of the productivity argument that rarely gets discussed; and it is not just in the workplace.

That is no longer the case. For many people, concerned that their wages may not grow - or might even become zero - house prices are now unaffordable. From a family perspective this is a productivity problem, which is why, even after some significant house price falls, the market remains stagnant. Lower interest rates might work at the margins, but buyers want the same productivity gains as employers do; they want to see the cost lowered to achieve the same outcome.

Unfortunately homeowners tend to withdraw from the market rather than sell their home for less than the peak value, unless they have no choice. This tends to freeze the market because the sellers don’t accept the productivity argument presented by the buyers.

Equity investors are the same. They want their capital to work more efficiently.

The risk profile has changed, so they expect the promised returns to be better or the cost of equity to be lower. In this market the latter is more likely, even though businesses seeking capital would all rather be able to talk up the former.

So I see the argument around productivity as quite frightening; not because I don’t believe we need a reduction in costs across our economy as the boom ends, but because the people talking about this will not be honest about what it means.

Dreaming that we might all work a bit harder, or technology will help us work smarter, is ignoring the fact that a lot of people are simply paid too much for the work they have to do.

Unless they accept pay cuts, homeowners accept lower prices and businesses accept reduced equity valuations, the markets have to find alternatives - such as firing people, renting houses, and putting their money in the bank.

Arguably the latter two have already been occurring for some time. The labour market’s turn is probably about to come.

THE subject of productivity was frequently referred to at an Asia-Pacific Professional Services Marketing Association event in which I participated last week.

I have to admit, professional services such as accounting, law and engineering consulting must be prime territory for the kind of productivity gains I was talking about above.

There has been an explosion of employment, at least at the top end, which will present challenges as the market wanes and firms compete for new sources of businesses.

I was staggered by our report in last week’s paper about the growth in accounting.

The number of accountants working for the top 20 firms in WA has grown by 28 per cent over the past two years, according to research by the WA Business News Book of Lists team.

That is on top of a long upward trend, with total employment growing every year for the past decade, except between 2009 and 2010 when employment plateaued after the GFC.

As the overall workload drops off, all these professional services firms will be looking to do two things -maintain revenue and cut costs. That means you can expect staff to be shed - this has already started happening - and competition down the food chain.

This has already been happening in the world of investment banking. Some of Perth’s boutique corporate advisers have been shocked to find the big national and international names discounting their prices in order to win business they would have looked down their noses at a few years ago. While this is dressed up as value, it is all part of the productivity game - getting more for less.

Different parts of the services economy will face this challenge at different times, but it will be coming with a bit of rush.

After our economy was let off during the GFC, the smart firms realised that that they would have to be prepared for a rerun at some stage; within reason, they have been keeping their costs under a certain amount of control even as they grew and been developing capability in areas of business that will be more robust in an economic downturn.

And, naturally, those in the advice space will be offering their views on how their clients can get productivity gains.