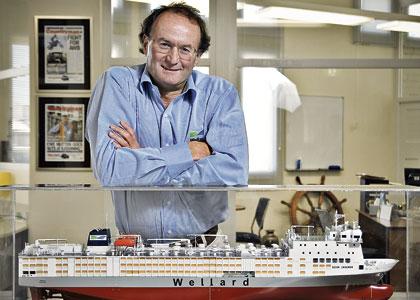 Soon-to-be-released financial results from the state’s largest livestock exporter, Wellard Group, will put the spotlight on the true impact of last year’s temporary ban on cattle exports to Indonesia, but the company is anticipating a disappointing outcome.

During the 2010-11 financial year, Wellard reported revenue of $411 million, of which about 90 per cent was attributed to income from the company’s live animal exporting subsidiary, Wellard Rural Exports.

The financial year ended just as cattle exports to Indonesia were halted by the federal government out of concerns for animal cruelty – a ban that contributed to a 34 per cent decrease in the total number of cattle exported from WA in 2011.

As a result, Wellard expects virtually nil revenue growth over the 2011-12 financial year.

The government ban affected not only the cattle trade, according to Wellard, which counts Indonesia as its biggest customer, but also the export of live sheep.

Wellard Group executive chairman Mauro Balzarini said the introduction of new government regulations had affected the export of all animals to all destinations, and would more than likely contribute to flat revenue for the current financial year.

While he supported the introduction of regulations to improve the care of animals, Mr Balzarini said the decision had made exporting a more time consuming and costly exercise.

WA accounts for about 70 per cent of Australia’s total live sheep exports, but the number shipped fell by 30 per cent in 2011.

In dollar figures, the state’s takings from total live animal exports fell by $115,000 over the year.

The situation is unlikely to improve as the recent rejection of a shipment of sheep to Bahrain has prompted yet more calls from animal welfare groups for the government to end the live export trade.

But that response is not quieting calls for the end of the trade, and Mr Balzarini said if the process became too difficult it would be to the detriment of local farmers.

“(Australia) is no longer the only supplier of livestock in the world; there are many other countries which have come in over the last ten years,” he said.

“The more restrictions and cost we add to our product means products from other origins become more competitive.”

While Mr Balzarini said Wellard supported Australian producers and their product, the company could source livestock from other countries.

“The potential for this industry is very big and we need to be sure that we can capitalise on that and we don’t lose our competitiveness to others,” he said.

Until now, grain farmers have none of the concerns afflicting animal producers, however, with grain exports a constant source of positive news for the agriculture sector.

WA produced a bumper harvest for the 2011-12 year with a record 14 million tonnes of grains exported. That aided a 7.6 per cent increase in CBH Group’s annual revenue to $2.8 billion.

However the 2012-13 harvest isn’t expected to bring similar results, as the impact of a dry season will be reflected in reduced yields and earnings.

Total crop production is forecast to fall by 35 per cent, with the biggest contributor – wheat – falling by almost 40 per cent.

The reduced area of wheat planted has also added to the decrease, with 6 per cent less area planted for this season. Mitigating lower production is the increasing price achieved for grains.

The price is being pushed up partly because of a lull in supply from the US, which has experienced a once-in-a-century drought.

Wellard is also involved in the grains business, with about 3 per cent of its revenue coming from the production of grains, amounting to about $15 million.

Mr Balzarini said September rains had aided the cropping business, and he expects prices to continue rising throughout the coming season.

Lifestyle and dietary changes among Asia’s growing middle classes were also providing opportunities for grain growers, with lupins a case in point.

“China is starting to appreciate grain-fed beef so that is increasing the demand for soya beans ... (but) lupins are going through the roof now because it’s a good substitute for soya beans, and we have a lot of lupins in the ground thank goodness,” Mr Balzarini said.