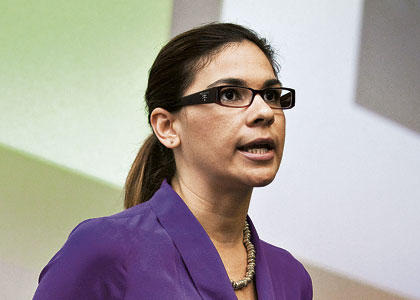 ECONOMIC development is the answer to indigenous liberation in Australia, facilitated through procurement and contracting of indigenous corporations and joint ventures.

That was the message at a Centre for Social Impact conference on indigenous business last week, where procurement was a common theme in the discussion of strategies to ‘close the gap’.

Kimberley Regional Economic Development Corporation chief executive and former Kimberley Land Council director, Wayne Bergman, says it is a false belief that economic development comes at a cost to Aboriginal culture; he believes it is the best way to empower indigenous people.

Indigenous employment has been a dominant issue in recent years, with the Australian Employment Covenant, Reconciliation Australia and other like-minded organisations pushing the agenda with big business; now, however, the procurement of goods and services from indigenous businesses is developing as a mainstay of empowerment.

Horizon Power manager remote business development and indigenous engagement, Graeme Eley, has led the implementation of the company’s Aboriginal Employment and Engagement strategy, which quantifiably aims to grow its indigenous employee contingency to 20 per cent by 2015-16 and more loosely aims to improve its engagement with indigenous enterprises next year.

Horizon will establish an Aboriginal community advisory council in the new year to report on the company’s engagement with the communities it works in and advise on new programs, such as its procurement plans.

“Part of the membership decision making will be to strengthen our ability to be a catalyst for Aboriginal business capability growth,” Mr Eley said.

That will entail using procurement and tendering processes to create opportunities for indigenous businesses. One of the suggested ways to do that, according to Mr Eley, is by creating more jobs of a size that smaller enterprises can tender for and grow capabilities through.

“The key objective seems to be, to have contracts broken down into pieces of work that are suitable for businesses, reflecting where their capabilities are,” Mr Eley said.

“At the moment we tend to bundle things into big contracts because most of our service providers are large organisations.”

Dividing work contracts into smaller parcels is one of the strategies both Rio Tinto and Worley Parsons use to engage indigenous business.

“We take our big contracts, which are substantial, and package those into a size that suits specific Aboriginal businesses and vendors so those companies have the contract to gain experience without choking on the size of it,” Rio Tinto principal adviser Aboriginal business development, Kimberley Kohan, told the CSI conference.

Rio Tinto has also developed other methods to grow its indigenous enterprises collaboration.

The company’s social consulting services manager, Danielle Nazzari, said the three parties involved in a joint venture – meaning two joint venture partners and the client company – had important elements to consider independently of each other.

For the customer, he said, it was important to consider the ability of the company to resource the project. For the primary joint venture partner the scope of work and committing to a skills transfer over time and developing a structure that avoids disputes was integral.

For the indigenous enterprise (if not the primary partner), decisions about whether the work was a means to an end or long-term strategy, and considerations for ongoing operational funding, were important considerations.

GLH has grown from a 20-employee business to one with 80 employees in the past five years, growth facilitated largely through joint ventures.

The company does work for Rio Tinto, BHP and smaller miners such as API and Iron Ore Holdings, and just completed its contract for wharf facilities at Cape Lambert for Rio Tinto (a joint venture with construction company Abigroup).

“If you haven’t got the capacity to gain work on your own, try to engage with a company who has and become a subcontractor in the interim until you build the knowledge,” Mr Stewart said. “If the price is right and you are able to do the work, you can get the contract. It has got to the stage where it is not an indigenous thing, it is whether you have the capacity to do the work.”

Australian Indigenous Minority Supplier Council was established in 2009 to facilitate procurement of indigenous enterprise goods and services after the federal government revised the Indigenous Opportunities Policy to create greater opportunity in government contracts.

AIMSC chief executive Natalie Walker describes the council as a ‘dating agency for business’, and that the potential existed to create ‘an economic powerhouse’ in indigenous business.

During the past two years, the organisation has grown its base to 130 customer members, 60 per cent active, and has facilitated $33.7 million in business activities through 442 transactions, the vast majority of which were in the mining and resources industry.

Similarly focused organisations have been established in WA in recent time.

Indigenous Construction Resource Group, which is co-chaired by Azure capital founder John Poynton, aims to maximise and grow the engagement of indigenous labour resources within the construction and maintenance activities of the resource industry.

The Pilbara Aboriginal Contactors Association was established in 2009 in response to the lack of opportunities for and representation of local Aboriginal contractors in the region and works to facilitate growth in indigenous business engagement.