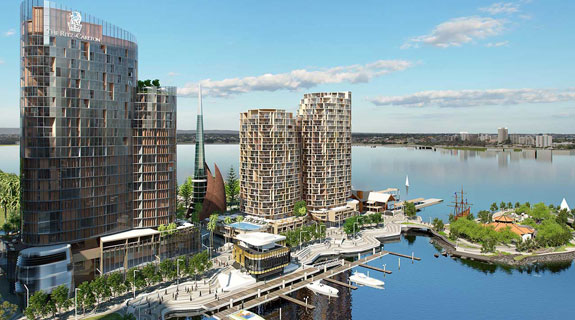 The Ritz-Carlton project is one of Perth's highest profile developments.

Probuild has secured the state’s biggest building coup of 2016, with the national construction outfit understood to have been selected as developer Far East Consortium’s preferred contractor for the luxury Ritz-Carlton Hotel and The Towers at Elizabeth Quay.

Construction on the project is likely to begin in May, one month ahead of the required start time under Far East Consortium’s deal with the state government.

City of Perth development assessment panel documents estimate the build to be worth around $400 million, a figure that made it one of Western Australia’s most sought after construction jobs.

Probuild declined to confirm or deny the contract award when contacted by Business News, with a spokesperson only saying the contractor was currently busy on a number of big jobs in the state.

Far East Consortium had not responded to Business News’ enquiries at time of publication.

However, multiple sources in Perth’s construction industry confirmed the project, which will comprise a 204-room luxury hotel and two apartment towers containing 335 dwellings, would be built by Probuild.

Probuild is also understood to have appointed local firm Global Construction Services to supply formwork and concrete works, under a deal worth around $40 million.

Pre-sales for the apartments were officially launched in November last year by PRD Nationwide, with more than 300 people having committed a $20,000 deposit as an expression of interest.

More than 6,000 people informally expressed their interest in the apartments in 2015.

PRD Nationwide owner Angus Murray said around 190 apartments had been sold to date, with those sales collectively totalling $275 million.

Mr Murray, who also would not confirm the builder’s identity ahead of an official announcement, said most of the sales had been to local Perth residents, with only around half a dozen apartments sold to offshore investors.

“We always said that we would offer it to Perth people first, but it will be taken to offshore exhibitions through China in April and May,” Mr Murray said.

“We’re expecting that to give a further boost to sales and keep it rolling on. It’s a big project, there’s about $500 million worth of product.”

“But if you’ve got something exceptional like Elizabeth Quay, buyers come out of the woodwork.

“They certainly have the confidence and they’ve certainly been prepared to come and stand behind it.”