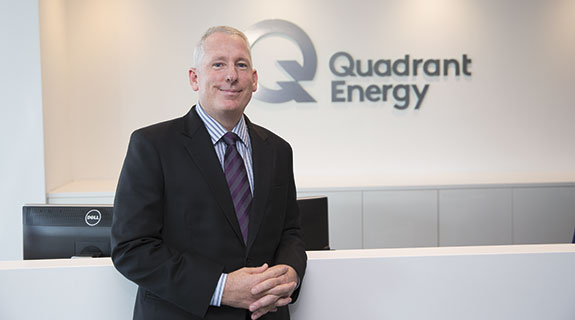 THE launch this month of independent oil and gas producer Quadrant Energy has underlined the big role private equity investors play in Western Australia, owning more than a dozen major businesses across the state. Quadrant is the new name for the oil and gas business previously owned by US-based Apache Corporation.

That was less than the $US2.1 billion announced previously, and reflected what Apache called $US225 million in customary, post-closing adjustments.

Quadrant chief executive Brett Darley believes the new owners’ deep pockets will be a plus for the oil and gas business.

“Our new owners have the appetite to invest more,” Mr Darley said.

“They are looking to use it as a platform to scale up their acquisition.”

Mr Darley told Business News the new owners were attracted to Quadrant’s current assets, its team of 700 staff and contractors, and its growth plans.

These include a major focus on exploration, with plans for its biggest-ever seismic program off WA’s north-west coast.

In addition, drilling on the Levitt prospect and Roc-1, associated with the recent Phoenix discovery, in the Carnarvon Basin is scheduled to start in the second half of this year.

Quadrant is also continuing with commissioning of the Coniston project.

Mr Darley believes Quadrant has more scope for growth as an independent company than it had as the Australian division of a US-focused multinational.

He said Quadrant was in a “nice niche” in that it was large enough to look at significant opportunities but small enough to act fast.

“We think there’s an opportunity to grow the business, and not just organically. We’re up for any other acquisitions that make sense for us and add value to what those new owners want to do.”

Its core business will continue to be supplying gas to WA’s domestic market.

Quadrant supplies more than 40 per cent of WA’s domestic gas, through its interests in the Devil Creek, Macedon and Varanus Island gas plants.

It also has interests in several producing oil and gas projects offshore WA, including the Pyrenees, Ningaloo Vision and Stag operations.

Like all private equity deals, there will be speculation about how long the new owners will retain the business.

Macquarie Capital brought in AMB before the deal had even closed, agreeing to sell about a 20 per cent stake in Quadrant to the business arm of mining heiress Angela Bennett.

The weakness in global commodity markets created the opportunity for the new owners – they were responding to Apache Corp’s desire to sell its non-US assets.

The same commodity market weakness has forced some other investors to hold on to their assets longer than the three to five-year period that normally defines private equity deals.

TPG Capital had been looking earlier this year to sell Alinta Energy but was unable to attract the price it wanted.

The fund’s first deal was a takeover bid for Mungana Goldmines, which is still live.