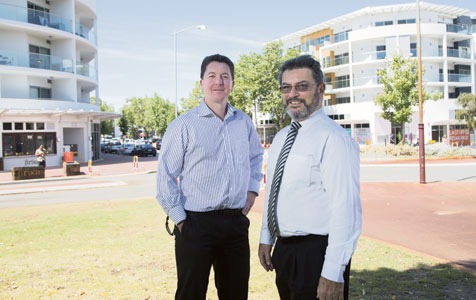 “That was a really big coup for us,” chief executive Danny Psaros told Business News.

“Having other people put a few million dollars into our projects is very satisfying.

“It’s even more satisfying when you pay it back and talk about what comes next.”

Psaros had previously co-invested with high net-worth individuals, but reached a point about two years ago where it needed institutional money to support its growth.

“People said we were crazy trying to get institutions to back a builder-developer,” Mr Psaros said.

With that financial backing, Psaros has completed six apartment projects in the past two years, with a further six currently under construction and four more in the sales and marketing stage.

“We unashamedly want to be the best mid-tier developer in Perth,” Mr Psaros said.

“We think we have arrived.”

The developer’s growth is evidenced by $133 million of off-the-plan sales since the start of February.

Mr Psaros has been in the building industry for 30 years, focused initially on upmarket houses in the western suburbs.

Managing director Mike Enslin, who comes from an accounting and finance background, became a partner in the business seven years ago.

The two men work together from a shared office, where they oversee a vertically integrated business – from buying the land and developing the property, to managing the construction and marketing of each project.

“We spent a lot of time building up the back-room systems and processes so we can manage that number of projects,” Mr Enslin said.

Staff numbers have also risen significantly in recent times – from six a few years ago to 36 currently.

Mr Psaros is cautious about further expansion, however.

“If you get too big, you lose your ability to control everything,” he said.

The group recently launched two of its largest projects – Edge in Northbridge (98 apartments) and Flo in Rivervale (86 apartments).

However, Mr Psaros said he planned to maintain the group’s focus on mid-sized developments, with most being 40 to 50 apartments.

“Risk mitigation is very important in what we do. The bigger the project, and the longer the cycle, the more risk there is,” he said.

“We also make sure we have a very efficient decision-making process.

“If you have other people who you are answerable to, that just slows everything down. You have to be in control of your destiny.”

Psaros projects have similar pricing to its major competitors but the group argues that it delivers more value to buyers, particularly through its focus on sustainability.

Other features include features aligned to maximise natural light, and passive solar and cross ventilation designs.

Psaros has also partnered with Osborne Park business Intelligent Homes, a leader in the installation of smart wiring that allows users to remotely control their lighting and electronic devices – including music and internet connections – and monitor their energy usage.

“You need to plan these things from day one,” Mr Enslin said. “You can’t retrofit these features.”

The Psaros group illustrates its commitment to sustainability by its ‘carbon neutral’ head office and its decision to measure the carbon footprint of its projects.

“It’s also about the culture of our organisation,” Mr Psaros said.

“We work hard to get our staff on board; they can see it’s a good thing we’re trying to do.”