A series of major trade sales and the prospect of one of WA’s biggest-ever IPOs were highlights in what remained subdued capital markets in the September quarter. Also in our special report, how a surge in backdoor listings is attracting Silicon Valley entrepreneurs. 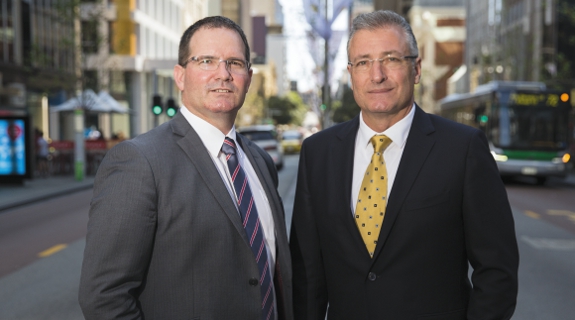 A series of major trade sales and the prospect of one of WA’s biggest-ever IPOs were highlights in what remained subdued capital markets in the September quarter.

Also in our special report, how a surge in backdoor listings is attracting Silicon Valley entrepreneurs. 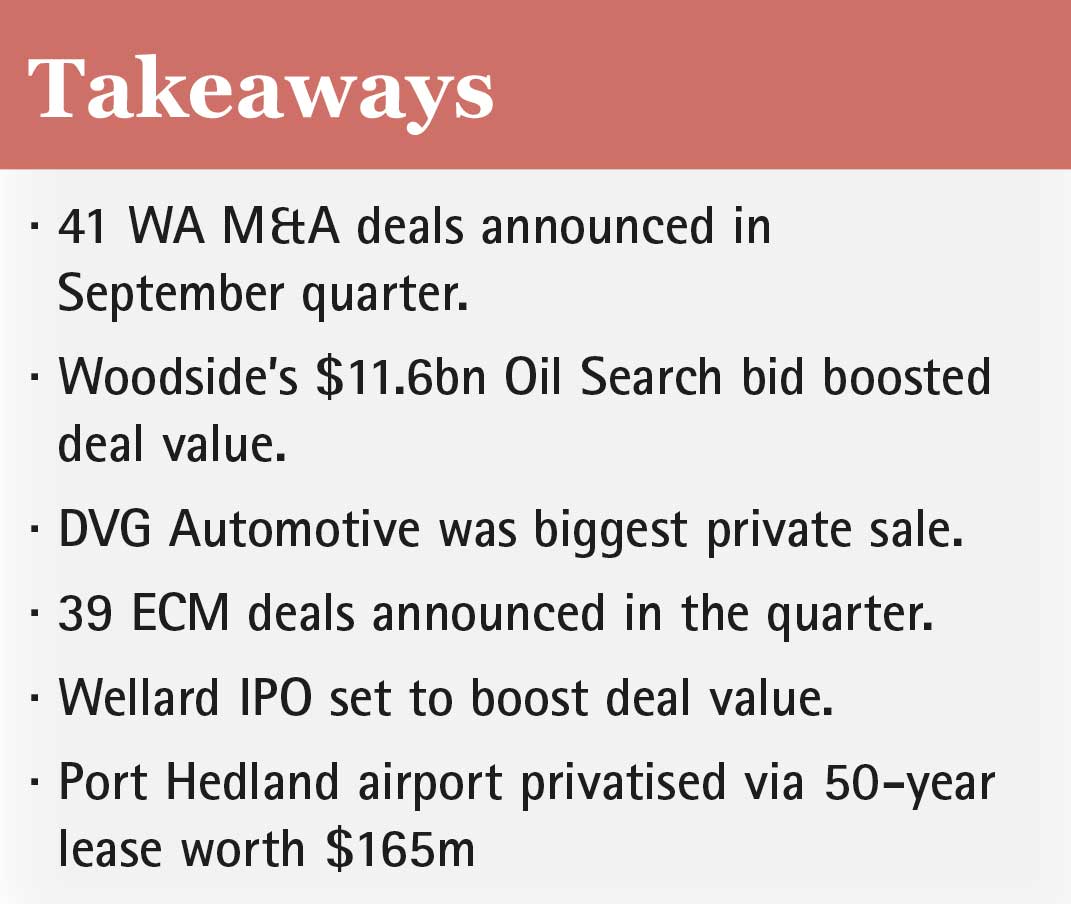 Many private businesses reach a point where they recognise their ownership structure puts a cap on their growth aspirations.

Or they get to a stage where offers from big national or international players are just too hard to pass up.

These factors were the driving force behind a series of major trade sales in Perth during the September quarter.

While some of the vendors plan to enjoy a financially comfortable retirement, most are attracted to the growth opportunities they can see under new ownership.

Another Perth business seeking new ownership is livestock exporter Wellard Group, but it is taking a different path.

Led by Mauro Balzarini, Wellard has grown into one of the state’s largest agribusinesses, with revenue of $486 million last year.

Wellard has engaged investment bank UBS to prepare for an initial public offering that is tipped to raise between $200 million and $300 million.

China’s Fulida Group, which recently established a joint venture with Wellard, is considered a likely cornerstone investor, with the family expected to retain a substantial minority stake.

It’s ironic that in the middle of weak equity markets, WA’s two biggest IPOs in nearly a decade are set to occur in 2015.

Wellard, if all goes to plan, and AFG are the exceptions to the current rule.

(click image to see full highlights of the quarter)

For DVG, the sale of a 67 per cent stake to Japanese auto company Gulliver International came about after managing director Lou Divirgilio had two unsolicited approaches from private equity groups.

Mr Divirgilio toyed with the possibility of a private equity deal, with one group going so far as to submit a written offer.

“They weren’t far off but I prefer a trade sale to a private equity buyer,” he said.

“Their strategy is completely different; our view is long term and Gulliver’s view is certainly long term.”

“It got us thinking; we weren’t looking for a buyer or to sell out but after the initial approach, it broadened my horizons.”

Mr Bradbury had previously had some contact with DVG, when he presented an acquisition opportunity.

He brought the parties together and they soon recognised the potential to do a deal.

“We’re a family company and we’d like to stay that way, and they are much the same.

“They are a public company but they conduct themselves more as a family business.”

Mr Divirgilio said the due diligence period included spending time in Japan with the family, which confirmed the cultural fit.

“We spent a few days in Japan, and had dinner at the chairman’s house, which I think was a first for them.

“They came here, visited the dealerships, and had dinner at my place.

“It was more social than business.”

Mr Bradbury said the price negotiations were not difficult.

“That side of the deal was relatively easy. The number that we wanted was stated, it wasn’t a lengthy negotiating process,” he said.

“It was more a question of can we come together to grow the business, they both want to see it grow.”

Gulliver has paid $120.6 million for its 67 per cent stake, valuing the overall business at $180 million.

A measure of the trust between DVG and its new majority owner is that Mr Bradbury has been appointed independent chairman and Gulliver has only one representative on the six-person board.

Mr Divirgilio said it was business as usual on a day-to-day basis, but the group could now focus more on expansion.

“We want to grow our business and having a partner who is more substantial than us will quicken the process,” he said.

DVG had annual sales of $664 million last year, ranking it as the ninth-largest private business in WA, according to the BNiQ database.

It also ranked just below John Hughes Group, which has pulled back from plans for an IPO, and well below ASX-listed Automotive Holdings Group.

“We think there is a lot more room for growth in WA,” Mr Divirgilio said.

“We’re a reasonable sized group but we’re certainly not large by any means; there are areas where we’re not represented and there are brands that we don’t represent.”

Mr Divirgilio said the group would also consider an east coast move if the right opportunity presented, most likely through acquisitions.

“We got to a stage where we needed to do an IPO or bring in private equity, and that was the path we were going down,” Mr Hopkins told Business News.

The merger came about after Mr Hopkins was approached by AMA Group executive chairman Ray Malone.

“Ray has the listed vehicle but doesn’t have the national footprint or the consolidation expertise,” Mr Hopkins said.

AMA is paying up to $100 million in cash and scrip for Gemini, with Mr Hopkins set to emerge as a major shareholder in the listed company.

He will become a director of Melbourne-based AMA Group, and plans to focus on expanding the merged business, which will have annual revenue of $250 million.

Three other trade sales during the quarter will give big listed companies more muscle in the WA market.

CKA co-founder and director John Carrigg said the deal had upside for the local team.

“We were keen to accelerate the expansion of our business nationally and internationally, along with strengthening our footprint in Western Australia,” he said.

“In Willis, we believe we’ve found the ideal partner.”

Another WA business to change hands was Western Biomedical, which was bought by national player ParagonCare for $28.9 million.

Also in the medical field, Perth-based Sonic HealthPlus – which is part of national player Sonic Healthcare – struck a deal to buy Medibank’s Workplace Health and Travel Doctor-TMVC businesses, for an undisclosed sum.

The September quarter saw two developments that show how M&A deals, large and small, do not always work out as expected.

Back in March, Bob and John Shier thought they had a deal to sell their truck and trailer rental business Rentco after announcing an agreement with listed company Emeco Holdings worth up to $75 million.

However, Emeco later terminated the agreement after facing a backlash from some of its major shareholders.

At the big end of town, Woodside Petroleum launched an ambitious $11.6 billion tilt at Oil Search but was knocked back in no uncertain terms, with Oil Search saying the scrip offer grossly undervalued the company and had little merit.

With its strong balance sheet, Woodside is sure to be looking closely at other opportunities thrown up by the depressed oil price.

No doubt one of those will be Santos, which has engaged Deutsche Bank and Lazard to advise on the potential sale of most of its assets.

A growing suite of privatisation opportunities is good news for corporate advisers.

The Town of Port Hedland, advised by The Airport Group and Norton Rose Fulbright, agreed to sell its airport to AMP Capital and Infrastructure Capital Group for $165 million.

Macquarie Capital and Herbert Smith Freehills advised on the buy side.

Another emerging deal is the sale of Market City, the operator of the Canning Vale fruit and vegetable markets.

The state government, advised by EY and JLL, announced a shortlist of five bidders.

These include an industry consortium advised by Azure Capital, which was one of the busiest advisers during the September quarter (see table).