Asset sales, cost cutting and restructuring are under way across WA, creating opportunities for professional services firms. Click through to see details of more than 30 privatisation deals in WA, from 1961 to the present day. 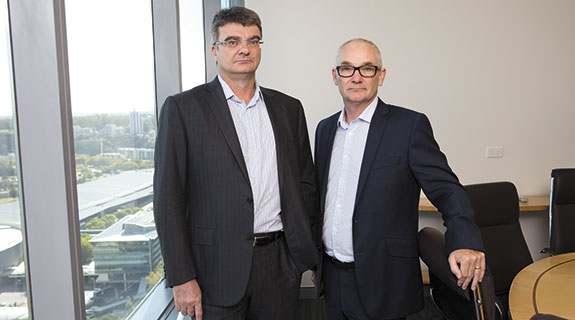 When government ministers and chief executives contemplate selling some of their existing assets, they might reflect on some wise words from John Thomson, who spent 30 years running Wesfarmers in the days when it was a farmers’ cooperative.

Among Westralian Farmers’ early initiatives was the launch of WA’s very first radio station, 6WF, in 1924.

‘Tearing Tommy’ Thomson had championed the new venture, according to The People’s Story, a publication that recounts the 100-year history of Wesfarmers, but was smart enough to change his tune when the venture proved to be commercially unviable.

“The directors of Westralian Farmers do not care who owns the station, provided it gives service,” Mr Thomson said just a few months after the launch.

“If some company would undertake to give equal or better service, no-one would be more delighted than we would be in getting right out of it.”

Wesfarmers sold 6WF to the Commonwealth government in 1928 and, as we all know, the service continues to this day as part of the ABC.

The conglomerate is focused on delivering good returns to its shareholders, and is prepared to sell any of its businesses if that supports its overarching goal.

Many other organisations, in the public and private sectors, are reluctant to apply the same pragmatic approach.

Yet looking back at the history of Western Australia, there has been enormous change in the way government delivers services and supports state growth.

A century ago, the state government set up an extraordinary array of businesses including hotels, abattoirs, brickworks and sawmills, many of which competed with private operators.

These were eventually shut down, with one of the last being the state engineering works at Rocky Bay, closed by Brian Burke’s government in 1987.

It’s instructive to look back at these changes as debate continues over the merits of privatisation, with the current hot-button issues being Serco’s contract at Fiona Stanley Hospital and the possible sale of the TAB.

It’s also notable to see that many private companies, like the government, have started to rethink their business model as they deal with the tougher economic times currently prevailing.

Selling assets is only one option.

Contracting out services is another – though in some notable cases, from iron ore miner BHP Billiton to energy utility Western Power, they have chosen to bring contracts in-house.

Procurement is another big focus and can mean everything from negotiating a better deal from suppliers to finding third parties who are better able to build, own and operate assets.

It’s a practice that has been used increasingly by the state government, in large part because of work done by Troy Buswell when he was treasurer.

The $140 million multi-storey car park at the QEII medical centre, the $230 million Eastern Goldfields regional prison at Kalgoorlie, and the $370 million water treatment plant at Mundaring are all designed, built, operated and owned by private consortia.

The new Midland public hospital is a variation on this theme. It is being funded by the state and federal governments but is being designed, built and operated by a private consortium, led by St John of God Health Care.

The new stadium at Burswood is another variation on the public-private-partnership model.

Privatisation in WA is not new.

Sir David Brand’s coalition government kicked it off in 1961 when it sold State Building Supplies to UK company Hawker Siddeley, after contending with similar arguments to those raised now.

The next big opportunity is the sale of the TAB, with Premier Colin Barnett saying last month it “arguably could raise up to $1 billion”.

Mr Barnett encouraged speculation the TAB will come up for sale when he said a betting agency was “not a proper or normal function of government”.

He told state parliament the possible sale was “the great roll of the dice” for the racing industry.

“There could be a scenario in which the TAB is privatised, one of the major tracks in Perth is closed and the land sold, and the building of an outer metropolitan racetrack, training facility, stables and equestrian area could be all done, all funded,” Mr Barnett said.

“That is the one chance the racing industry will probably have in the next 50 years.”

Beyond the TAB, longer-term opportunities include the energy utilities and ports, which in other states have already been sold.

An even more contentious issue facing the state government is the contracting out of multiple support services at Fiona Stanley Hospital to UK company Serco.

Serco is a big operator in WA, with about 2,500 staff running assets as varied as Acacia Prison and the Transperth call centre.

Acacia has been rated the state’s most efficient prison, and Serco has achieved success on other fronts, but right now it’s battling to deliver on parts of its contract at Fiona Stanley. “There are problems to be sorted out,” Dr Hames said.

“Part of the problem is that they have not been able to get enough staff with sufficient expertise to run such a major procedure.

“If Serco does not get it right, the contract will be terminated.”

Despite this latest setback, Dr Hames is standing by the government’s decision to appoint Serco.

“It is the best use of taxpayers’ money. It will save us in the order of half a billion dollars over the 20 years of the contract,” he said.

Labor believes the contracting out process was flawed from the start, noting that Serco’s only competition in the tender was from Brookfield.

The tender assessment panel concluded that it was “reasonably confident” Serco could do the job, a phrase Labor likens to being damned with faint praise.

Labor also believes the contract review was rushed, in order to meet the government’s political priorities.

“You are looking for a company that can do the job better, more effectively, cheaper,” he said.

“That means they have skills and capabilities, and scale, and the ability to be innovative, to access knowledge that is not inside your organisation.

“You are also looking for simplicity in your own business.

“I think they are the same whether you are a government trading enterprise or a private business.”

Mr Jaffray said some organisations outsource for the wrong reasons.

“The default solution is to outsource something because you’re not very good at it,” he said.

“But you should never outsource a problem.

“You should know how it’s done, how to do it well, and how value is created, and then select a partner who can do it better than you.

“If you outsource a problem, you just end with less control over that problem.”

Mr Jaffray said there were two aspects to getting the most value from a contracting alliance.

“You need hard performance metrics, and you also need a positive partnership with regular constructive dialogue,” he said.

“If that breaks down, you’ve got a serious problem.

“If you do outsource, you need to do it with a partner that you trust so you don’t have a duplicate management structure on top.”

“You need to know what is unique about your business that you want to keep close,” he said.

“What is core to your competitive advantage?

“The services that don’t differentiate your business are good candidates for outsourcing.” Mr Mairs said one of the trends he had seen was increased use of cloud computing, which helped organisations convert fixed IT costs into variable ‘on demand’ costs.

“Three years ago, the hype was ahead of the capability,” he said.

“We are now in the proving ground where big businesses are doing it, and genuine benefits are starting to come through.”

Some organisations have used contracting to create a different type of competition. Azure Consulting’s Rob Radley calls this ‘yardstick’ competition, and says it an example of competition ‘for’ the market rather than ‘in’ the market.

“Yardstick competition is about having enough suppliers so you can compare them against each other, and that creates the incentive for performance,” Mr Radley said.

It’s a similar concept in education, where the government is following the lead of other states by getting the private sector to deliver eight new schools.

It has short-listed three consortia, including local companies Decmil Group, Badge Constructions and Pindan, to design, build, fund and maintain eight schools for a 25-year period.

The Water Corporation is widely regarded as a market leader in effective use of contracting alliances.

Its Arooma alliance with Degremont and Transfield handles water and wastewater services, while its Perth regional alliance with Programmed handles operations and maintenance services.

Western Power used to be a big user of contracting alliances, with partners including Downer EDI, Tenix Group and Transfield Services to help with its big capital works program.

The utility still engages external contractors, but on an ad hoc basis.

“The use of external contractors provides Western Power with the flexibility to respond to changes in its program,” head of commercial Mark Thompson said.

“We also seek out suppliers that may be better placed to supply capacity, capability, innovation and manage the risk associated with the work they perform.”

This has parallels with the approach taken by some of the big iron ore miners.

BHP Billiton used to be a big user of contract miners such as Macmahon Holdings, but has insourced its Pilbara mining operations.

In another big change, Fortescue Metals Group last month consolidated two mining contracts into one, with Downer EDI getting extra work and Macmahon missing out.

These changes were mainly driven by the concerted effort to drive down costs, a trend that is affecting nearly every sector of the economy, public and private.

In extreme cases, cost cutting is a battle for survival.

ASX-listed New Standard Energy, for instance, announced last week that it only has four staff, its directors have suspended their fees, and the managing director has cut his salary by 50 per cent.

Mr Mairs said companies he was working with had an eye on both cost reduction and revenue growth.

“They are not simply about cost cutting,” he said.

“They are asking how they can diversify their revenue base, or build better relationships to win more work.

“The best of them play to revenue and costs.”

BDO partner Maurice Argento said cost cutting had been a big focus but people were starting to ask what would happen next.

“You need to go back to some fundamental analysis,” he said.

“What is the new operating model? How do I still deliver a good service? That’s just starting to happen.”

Mr Argento said this was challenging for people who had never experienced a sustained downturn.