The end of the financial year has triggered the sale of a spate of long-running private companies in Western Australia, including global tech leader Immersive Technologies, mining consultancy CSA Global and Action Industrial Catering. 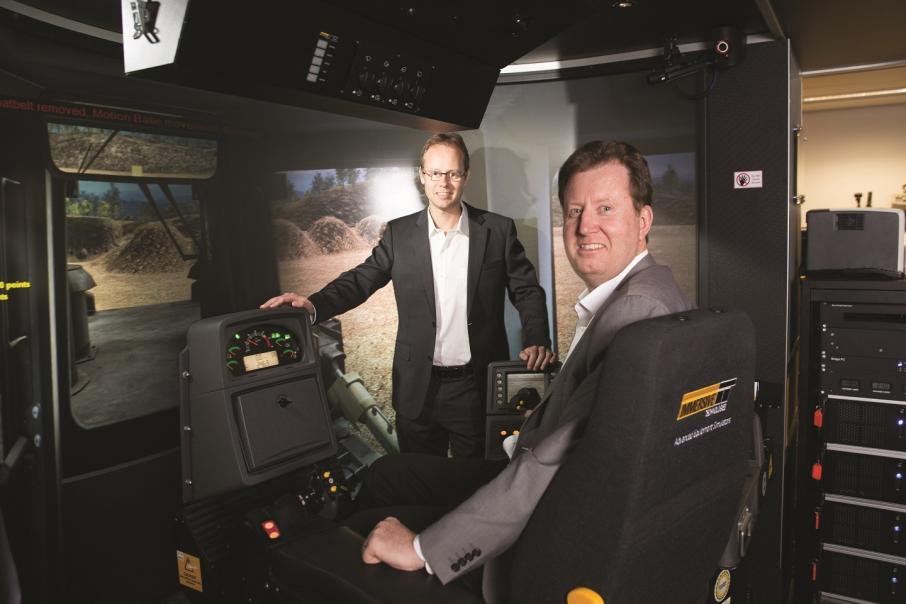 The end of the financial year has triggered the sale of a spate of long-running private companies in Western Australia, including global tech leader Immersive Technologies, mining consultancy CSA Global and Action Industrial Catering.

The owners of more than a dozen substantial private WA companies have struck sales deals over the past six months, according to the BNiQ deals database.

This includes two of WA’s oldest stockbroking firms, Patersons Securities and DJ Carmichael, and the state’s most active corporate advisory firm, Azure Capital, all of which have new owners.

These private business sales are among 105 WA-related M&A transactions worth a combined $5.32 billion in the past six months, according to the BNiQ deal database.

Global investment bank UBS advised Wesfarmers on the Lynas and Kidman bids and also advised Automotive Holdings Group on its takeover defence. Together, these deals put UBS at the top of the BNiQ advisers league table.

Among private companies, the biggest news was arguably the Buckeridge family’s decision to postpone indefinitely the sale of its building materials and construction group, BGC Australia.

However, the family is still seeking to sell BGC Contracting, with that process led by Macquarie Capital. 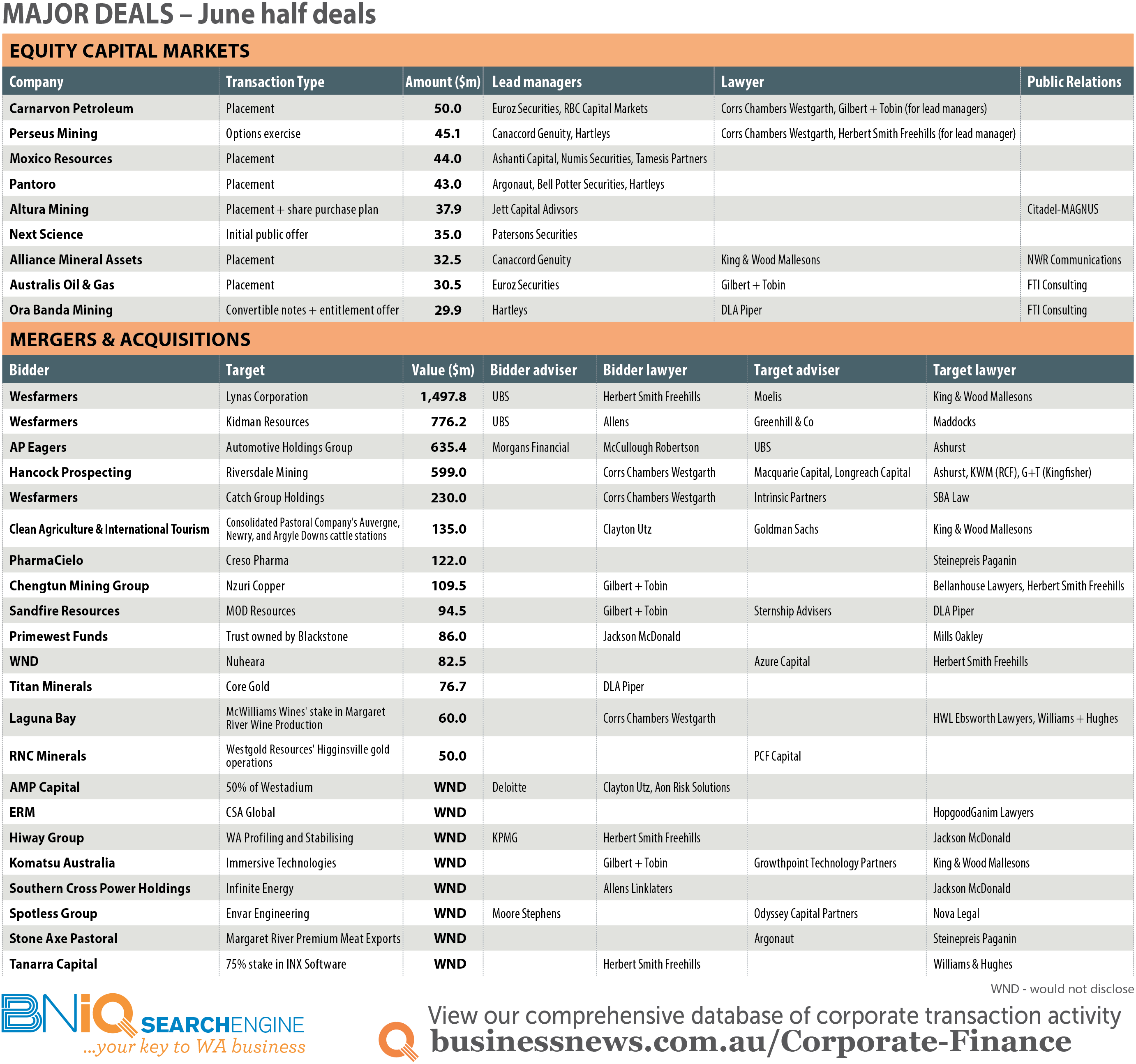 Private businesses that have changed hands include Immersive Technologies and CSA Global after their long-time owners went looking for a buyer.

Brothers Peter and Wayde Salfinger established Immersive 26 years ago and have built it into a global leader in the development of equipment simulators for mining companies.

Wayde Salfinger said he and Peter had for many years expected to sell the Osborne Park-based business, at a point that made sense for the company.

They engaged Silicon Valley investment bank Growthpoint Technology Partners last year to conduct a global search and determine if a suitable buyer could be found.

That resulted in an agreement to sell the business to one of Immersive’s alliance partners – Japanese manufacturer Komatsu.

“We engaged in a process to find the most suitable owner,” Wayde Salfinger told Business News.

“Komatsu is a strong strategic fit and represents an excellent outcome for our customers and staff.”

Immersive will continue operating from Perth with its current name and brand, as an independently managed, wholly owned subsidiary of Komatsu.

That will allow it to continue servicing mining customers that use equipment supplied by Komatsu’s competitors.

Komatsu said the acquisition fitted with its strategy of delivering greater value to mining customers, including through automation, digitisation, and visualisation technologies, along with human skill-based solutions.

“We are very pleased that Komatsu sees Immersive Technologies, as having an important role in this future,” Mr Salfinger said.

It was a similar story for West Perth-based CSA Global, which has been acquired by major international consulting firm ERM.

“We commenced, led and we’re proactive in the process to find and evaluate a company that would be a good fit for CSA,” Mr Elliott told Business News.

“We approached ERM and in them we found a company, a culture, an executive team and strategy that matched what we were looking for.

“We believe it creates a world-leading position as an adviser to the mining industry.”

Advisers on the deal included HopgoodGanim Lawyers, along with Hall Chadwick WA and BDO for financial-tax advice.

Mr Elliott was CSA’s largest shareholder, along with other members of the board, management and senior members of staff.

All executive directors will be staying with the business and will become partners in ERM.

Founded in 1984, CSA Global has grown to employ more than 100 staff across Australia, North America, Europe, Asia and Africa, making it a small add-on for London-based ERM, which has over 5,000 employees. 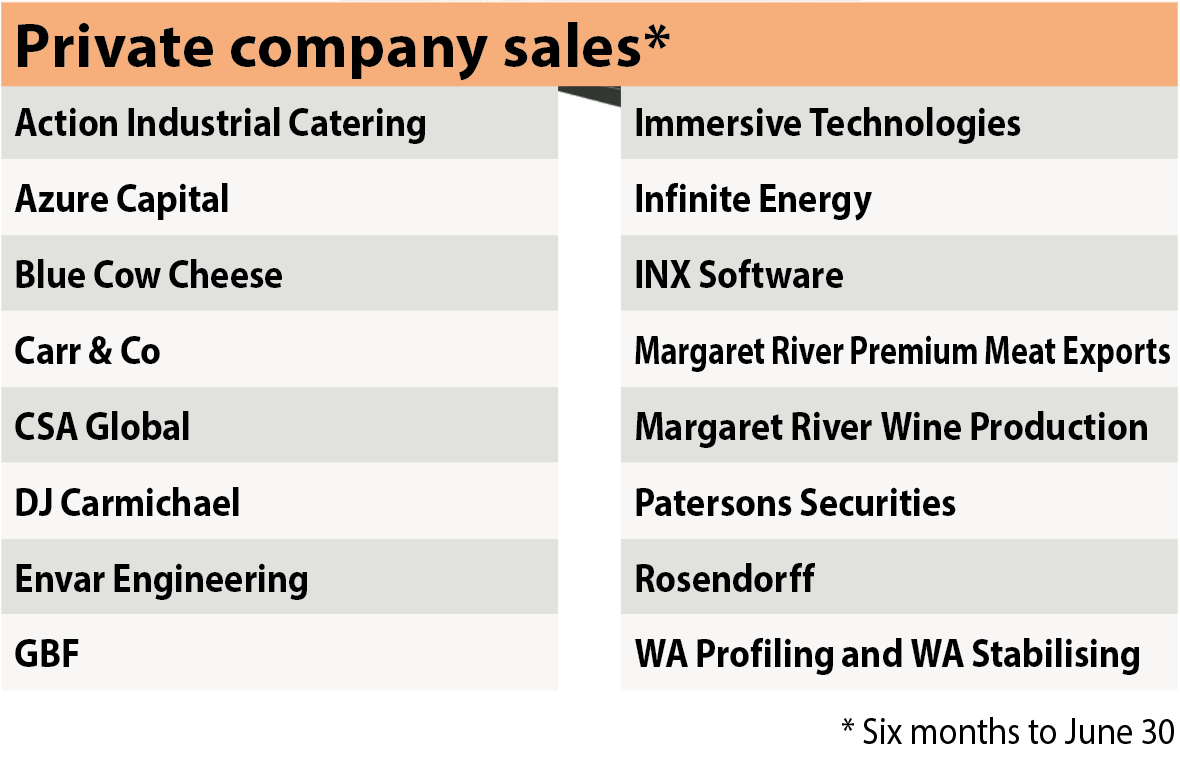 Like Immersive and CSA, facilities management company Action Industrial Catering was acquired by a much larger international business.

US-based Civeo will substantially expand its presence in WA through the purchase of Kewdale-based Action, which counts Fortescue Metals Group, Pilbara Minerals, and Western Areas as clients.

Established in 1995, Action Industrial is the 12th largest caterer in WA by staff, according to the BNiQ database, with more than 200 catering employees in the state.

Owen Selman and John Sells are the directors of Action.

Civeo currently operates a total of 33 lodges and villages in Canada, Australia and the US.

In WA, it runs the 230-room Kambalda Village, which services surrounding gold and nickel mines, and the 208-room Karratha Village.

Listed Australian companies were among the buyers during the half-year.

Macmahon, which is best known for its surface mining contracts, will substantially bolster its underground capability with the purchase of GBF.

The Perth Airport-based contractor, which was advised by Azure Capital and law firm Johnson Winter & Slattery, has agreed to pay $48 million up-front for GBF.

In addition, GBF’s founders Michael Foulds and Ross Graham will stay with the business and have the opportunity to earn further performance-based payments.

Sydney-based contractor Downer, via its subsidiary Spotless, has broadened its capability through the purchase of mechanical engineering, maintenance, and services business Envar Group.

Welshpool-based Envar was established in 1973 and has expanded to Sydney.

It has a focus on heating ventilation and air-conditioning systems, and holds significant contracts in health and aged care, defence, commercial offices, government, hospitality, and central plant upgrades.

Private equity groups had a role to play in several deals.

Mr Back said he had been building INX Software for a long time and wanted to find investors that could be trusted to support the vision of the team, product, and customers.

“We are pleased to engage with them for the next phase of growth of our business.”

The acquisition adds to Hiway’s geographic diversification and brings a new service line.

WA Profiling was started in 2004 and added the Stabilising services later in 2011.

Stone Axe took a controlling interest in the Margaret River business while its founders, John McLeod and Geoff Pearson, became shareholders in the Stone Axe group.

The transaction was structured as a merger of the two businesses with the key aim of continuing to support the long-term customer relationships established by the meat producer.

Margaret River Premium Meat Exports is a Wagyu beef producer with a purebred Wagyu herd of around 18,000 head. The business has been operating for 15 years and exports to 15 countries globally.

Its lead financial adviser on the sale was local investment bank Argonaut, which has a growing profile in the agribusiness sector.

Roc has $6.4 billion of assets under management and invested in Stone Axe in 2017.

Mr McLeod said that, in choosing a partner, he needed to ensure he was comfortable with their proposed approach to grow the business.

“We’ve had 15 years of optimising our supply chain and developing long-term customers we can stand by, and we don’t want that to change,” he said.

“The Stone Axe and Roc Partners teams have a very clear vision about where the wider group can go, and Geoff and I are excited to be a part of that.”