A veteran investigative journalist is documenting the challenges of keeping information private in an age of data threats. 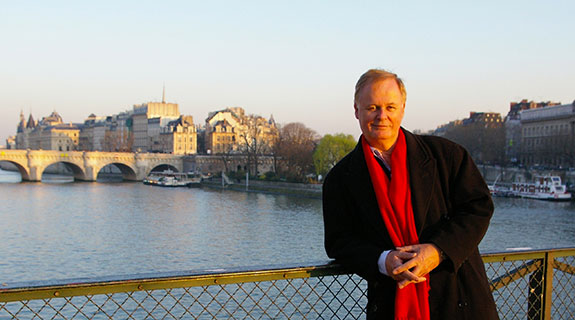 To veteran ABC journalist Andrew Fowler, one of the most vexing issues of our modern information society is just how much we take it for granted. “At a time when information flows more freely around the world than ever before, the controls are tightening,” he writes in his new book, The War on Journalism.

Fowler spent many years as an investigative reporter for Four Corners and Foreign Correspondent. It’s natural, then, that he should turn his mind to the control of information. He worries first and foremost about governments’ restrictions on the publishing of information they regard as security-related and the massive harvesting of data that flows through modern telecommunications systems. His information-age heroes are WikiLeaks’ founder Julian Assange, who challenged governments’ right to keep information secret, and National Security Agency whistleblower Edward Snowden, who challenged governments’ right to secretly harvest it in the first place.

Fowler also notes that non-government groups want their hands on your data – sometimes to make a political or moral point, but sometimes simply to prove they can get it. Such groups can do “horrific damage” to individuals’ privacy, he says.

He has a broader message, however, for anyone who wants to keep their information private: it’s harder than you think. “Everything you send on the internet you should basically treat as though anyone could read it,” he writes. If you want your messages to be private, encrypt them. If you want them to be truly free from scrutiny, keep them off the internet.

For any professional with data in online storage, this is a confronting message.

Fowler also believes that if you have to store data online, you should use an Australian server rather than a US one. He points out that if the US Government wants your data, it will get it, regardless of how hidden or encrypted it may be (in part due to security agreements between the US and Australia). Locating data locally can minimise your risk. If a US company subpoenas your data, it will be easier to defend Australian-based data than data located in the US.

Fowler’s final warning is not to think that you won’t be affected by the new data environment. “This is a game-changer,” he says.

Andrew Fowler will speak on privacy and freedom of speech at the CPA Australia Congress in Perth on 26 November.