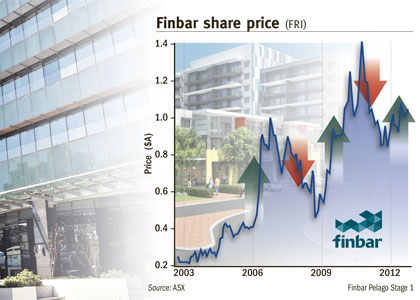 PERTH company Finbar has just 13 head office staff yet it is working on property developments worth nearly $1.5 billion.

Managing director Darren Pateman is proud of these numbers, which highlight both Finbar’s lean operating structure and its continued success in the market.

“We are one of only a few left standing in the Perth market,” he told shareholders at last week’s annual meeting.

Mr Pateman attributes much of the success to core principles established 18 years ago when the company started business.

“That has resulted in us being a fairly conservative company, not overly exposed to debt, always paying cash for land, only ever borrowing from the major Australian banks,” Mr Pateman said.

“When the GFC hit, we weren’t geared up like the syndicate developers, and we continued to have the support of the major Australian banks after all the second-tier lenders withdrew from the market.”

Mr Pateman told WA Business News after the AGM that the core principles had stood the test of time, and Finbar certainly wasn’t going to change them.

“We don’t get emotional about projects. It either meets our criteria, and if it doesn’t we move on to the next one,” he said.

One unusual aspect of the Finbar business is that the company has used the same builder and the same architect for most of its projects for more than a decade.

Builder Gerry Hanssen is an integral part of Finbar’s operations and played a big part in convincing the company to diversify beyond Perth to the Pilbara, where it has recently completed its first apartment project.

“There is additional risk, there is no doubt about that, but we have only undertaken that Pilbara move because investors would be compensated by higher margins,” Mr Pateman said.

“Most of the risk was in the construction risk,” he added.

“Gerry is a very experienced regional builder and he was able to convince us he could manage that.”

Both men describe Hanssen’s construction technique as like a grown-up Lego system, which can be replicated equally in the Pilbara and in Perth.

“Instead of taking the materials from Welshpool to East Perth, we are taking it 1,500 kilometres and doing exactly the same thing in Karratha,” Mr Pateman said.

“Gerry has proven himself, we are very proud of that achievement.”

He believes the close working relationship with partners such as Mr Hannsen is one reason Finbar has succeeded.

In particular, Mr Pateman believes the assured workflow enables Hanssen and other key suppliers to operate at lower margins than traditional contractors.

“We keep these people very busy and the nice thing about that is that they don’t need to worry about where their next job is coming from,” he said.

“So Gerry operates at a much smaller margin than if he were out in the open market as a builder.

“It’s the same with the architect. They don’t need to worry about their cash flow, they can focus on being good builders and good architects.

“It’s those few per cents here and there with relationship partners that mean we are building cheaper than the rest of the market.”

However this isn’t really a departure from the proven business formula; former Hannsen supervisors established both businesses.

Finbar currently has more than a dozen projects either under way or in advanced planning.

The largest is the $176 million Adagio apartment building in East Perth, which is being built close to several other Finbar developments.

It is next door to The Westralian, which was the group’s first big project in East Perth, about 10 years ago. Prior to that, Finbar had focused on the South Perth market.

In the Pilbara, it has completed the $95 million Pelago West apartments and commercial development, and recently commenced work on Pelago East, at a cost of $135 million.

It has also been selected for a circa $300 million apartment development in Port Hedland, next to a planned marina, and is seeking approval for a higher-density development before proceeding.

The latest project to gain development approval, just last week, was The Springs in Rivervale.

It will comprise two apartment towers and a smaller commercial development, and has an estimated end value of $128 million.

The Springs, like many Finbar projects, is a joint venture with the landowner.

“Joint ventures are an important part of our business,” Mr Pateman explained, saying they helped to spread risk and gave the group more financial capacity.

Finbar enters joint ventures only if the property owners’ land is unencumbered by debt.

“It’s very rare to find people who don’t have debt on their land,” Mr Pateman said.

Another indicator of Finbar’s prudent approach is the need for pre-sales to cover the maximum amount of debt on each project, even if the debt facility is fully drawn.