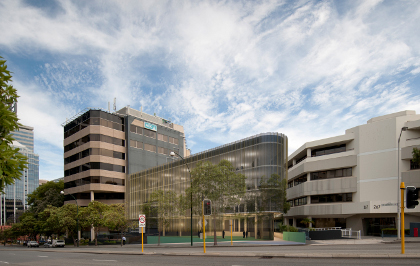 An artist's impression of the completed Veil 253 project.

Developer and syndicator Primewest has announced plans to build a four-level premium office development at the top of the Terrace after acquiring three adjoining properties at 253 St Georges.

The plans were recently approved by the City of Perth, allowing for a 3,577 square metre development.

The new building, which will be known as Veil 253, will be constructed above the existing lower ground car park that forms part of the adjoining building on site.

Primewest director John Bond said Veil 253 would have an imposing presence at the top end of St Georges Terrace.

Mr Bond said the building would offer 550sqm of office space at ground level, with three upper levels of more than 1,000sqm each.

“Veil 253 will set a new standard for design and environmentally sustainable construction with NABERS and Greenstar accreditation,” Mr Bond said.

“It will also incorporate a number of unique features to appeal to prospective tenants, such as a high quality, end of trip bike facility.”

The building was designed by Cox Architects and is expected to be ready for tenants by May 2014.