Iron ore shipments contributed more than $45 billion to the Western Australian economy in the 12 months to June, a figure well down on last year, according to BNiQ, despite a pick-up in volumes by the state’s major producers. 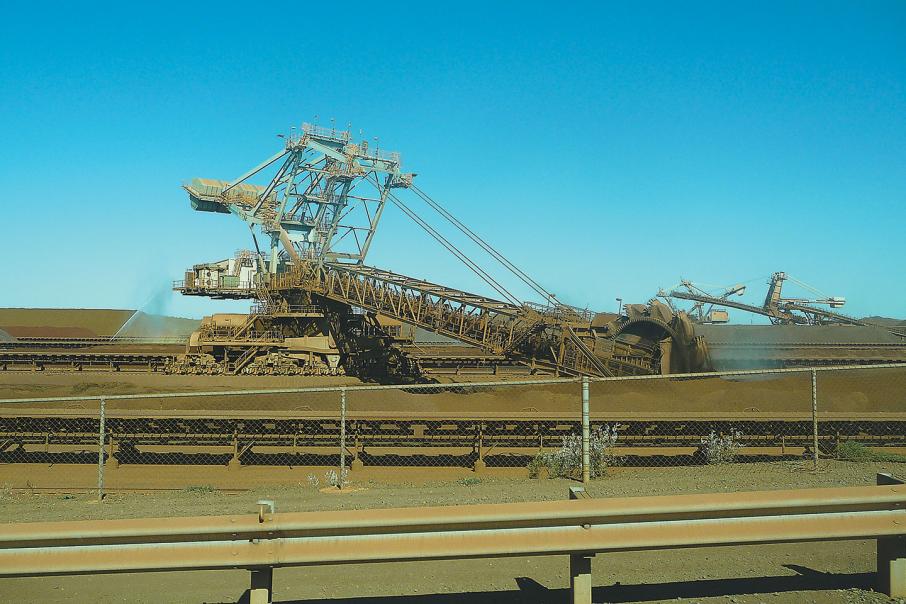 Iron ore shipments contributed more than $45 billion to the Western Australian economy in the 12 months to June, a figure well down on last year, according to BNiQ, despite a pick-up in volumes by the state’s major producers.

That figure is a significant drop from about $54 billion in 2014-15, according to the Department of State Development, although that number represented a 27 per cent fall from the year prior. 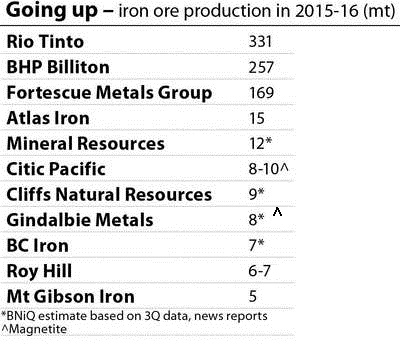 The shrinking contribution amid higher export volumes is largely due to the lower sale price of the steelmaking commodity, although ramp-up at some projects is also taking longer than had been anticipated.

The expansion in volumes was underpinned by moderate growth by the two biggest producers, Rio Tinto and BHP Billiton, while Roy Hill Holdings’ Roy Hill project started shipments in December.

Rio Tinto sales were 331 million tonnes across the year, after inventory buildups in the March quarter were unwound in June with sales up 7 per cent quarter on quarter to about 82mt.

The company reported an average price of $US44.50 per wet metric tonne on a free-on-board basis in the six months to June, down marginally from a price of $US48 in the 2015 calendar year.

Taken together, it means Rio’s iron ore exports would be valued at around $US15 billion for 2015-16, about $A20 billion.

Rio expects to maintain a similar run rate for the rest of the calendar year, with the high end of its guidance for 2017 being about 340mt. There’s a series of small investments on the horizon for the miner, and one potentially larger one.

The Nammuldi project is one such brownfields investment, with the 5mtpa capacity first stage having commenced at the Pilbara mine in the December quarter of 2015.

Stage two, which will double that capacity, will be operational before December this year, the company says, while an investment decision on the $1 billion Silvergrass mine, also in the Pilbara, is expected in the same time frame.

BHP Billiton’s WA iron ore division grew volumes by around 2 per cent thanks to utilisation improvements at the Jimblebar hub and Newman ore handling plant, with production at an annualised rate of 275mtpa in June. The miner shipped 257mt in the past financial year.

A new crusher is being installed at Jimblebar for the end of December.

Across the company’s operations, which included output at Brazilian miner Samarco until production was stopped there, ore was sold at $US44/t.

Production at Fortescue Metals Group was higher on the back of milder weather conditions at 169mt, up 2 per cent from 165mt in the 2015 financial year. The company has forecast output to be in the 165mt-170mt range again this year.

New producer Roy Hill Holdings added to the state’s numbers after the first shipment from its 55mtpa facilities in December last year. Roy Hill did not confirm production figures, but Business News estimates it has shipped 6mt-7mt.

Price pressure is expected to continue, with the federal Department of Industry now predicting it will average $US45/t for the year as a whole and the same level next year.

That’s lower than earlier projections, with the department suggesting this was partially due to loss-making businesses staying around longer than anticipated and keeping supply on the market.

A further factor will be growing supply from India, the department said.