Cautious bankers might prefer iron ore prices to be locked in before committing to major projects. 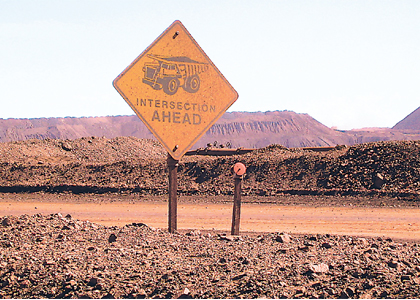 REACTION: BHP was largely behind the move to short-term pricing for iron ore as a way to get a better deal in business with Chinese customers.

Cautious bankers might prefer iron ore prices to be locked in before committing to major projects.

IRON ore’s big price bounce of the past few weeks must have put a smile on Gina Rinehart’s face as she rounds up a syndicate of banks to help fund her $10 billion Roy Hill mine; however there is no guarantee the banks will be overly impressed with the 80 per cent iron ore price rise.

What will concern bankers is a track record of commodities that go up quickly, and then fall just as quickly when the heat goes out of a market.

Much better, say bankers, is price and sales continuity to ensure there are no unexpected surprises that might cause a banking deal to be restructured long before its due date.

Last September’s iron ore price crash to $US86 a tonne will still be ringing in the ears of Mrs Rinehart’s bankers, as they get ready to advance a multi-billion dollar loan; and it would not be a surprise if the banks seek some sort of price hedging, or a fixed-price agreement from Roy Hill’s customers.

If that happens, the first step might be a trip back to the future, a time when iron ore was sold by annual price and tonnage negotiations rather than via overnight ‘spot’ market deals, or some other short-term pricing mechanism.

While a good idea at the time, BHP Billiton was largely responsible for the switch from annual contracts to short-term pricing as a way of maximising profits by squeezing the last dollar out of Chinese steel mills, which sometimes failed to adhere to annual arrangements when it did not suit them.

The most infamous contract breach was when a Chinese mill refused to pay for ore delivered by the small Australian miner, Mt Gibson; it almost triggered an international incident.

The Mt Gibson breach came around the same time China was prosecuting a team of Rio Tinto iron ore salesmen for allegedly seeking access to ‘state secrets’, which is how the Chinese treat iron ore purchases.

Mt Gibson’s contract problems and Rio Tinto’s jailed staff were examples of how the iron ore trading system can run off the rails, with last year’s yo-yo ride in the price - from $US160/t down to $US86/t and then back up to $US156/t - a messy way to sell a commodity which needs stability at all levels of production and pricing.

Mrs Rinehart’s banks will be acutely aware of the uncertainties in the modern iron ore market and will be keen to see it smoothed out before committing funds.

A return to annual contracts would be ideal to keep the banks happy. A forward selling, or pre-paid arrangement as part of a trade-funding deal might also work.

But, if a stable pricing arrangement cannot be found for Roy Hill, then it’s a fair bet that Mrs Rinehart’s rivals will be planning a welcome party for her in the form of heavy discounting as the first trains rumble down from the mine to Port Hedland.

Rio Tinto is the big iron ore producer most familiar with how the discount game is played, having suffered greatly in the early days of selling diamonds outside the De Beers cartel.

Once a happy member of the cartel, Rio Tinto opted to sell directly to Indian diamond cutters, only to find that in the week it started doing that, De Beers dumped a few truckloads of gems into the Indian market, ridding itself of a stockpile and killing the Rio’s opportunity.

In the current wildly fluctuating iron ore market, and without a firm price agreement with her steel mill customers, Mrs Rinehart could receive the same treatment from her friends at BHP Billiton, Rio Tinto or Fortescue Metals Group.

For the banks and Mrs Rinehart, price stability in the early years of Roy Hill will be important if the mine is to operate within its loan covenants.

For all other iron ore miners, especially FMG, which got a fright last year when the price crashed, it might be time to reconsider the merits of working in a floating price environment when every other aspect of the business, especially capital requirements, is fixed.

THE iron ore price is one of the unknowns Mrs Rinehart and her banks have to manage. Another issue, perhaps of even greater importance, is currency and the potential for the Australian dollar to drop sharply sometime this year.

There’s no sign of that happening today, but the global currency games being played by the US, Europe and China, are unpredictable and have the potential to upset smaller, trade-exposed, economies such as Australia.

Perhaps the best example of what’s happening with currency values can be seen in the way the US is allowing its dollar to slide lower, partly because it means repaying foreign debt with depreciated dollars, and partly to aid the country’s exporters.

Europe copped a ‘low dollar’ whack across its nose a few weeks ago when the pride of its aviation industry, Airbus, lost top spot in global aircraft sales to its arch-rival Boeing for the first time in a decade.

Other issues were at work in news that Boeing sold 537 planes in the 11 months to the end of November versus the 516 sold by Airbus, but the biggest was undoubtedly the highly competitive US dollar and the super-low interest rates available to Boeing’s customers.

Australian exports would love to enjoy the same benefits of a lower currency, and perhaps they will before the end of 2013.

ANOTHER indication of the giant rotation of money and power from the Western world to the Eastern world was quietly revealed last week when it was announced that, for the first time, there were more cars sold in China in 2012 than Europe.

The reason the Germans are following Chinese car sales closely is that their big name brands such as Mercedes, BMW and Audi, are selling more vehicles in China than at home.