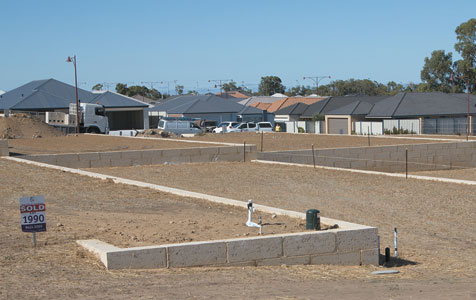 Perth land prices have remained the most expensive in the nation on a per square metre basis.

Evidence is mounting that Western Australia’s residential land supply is coming under serious pressure, according to the Housing Industry Association.

Residential land in Western Australia remains the most expensive in the nation, either in the Perth metropolitan area or in regional centres, according to the latest Housing Industry Association-RP Data land report released today.

The report showed Perth was the most expensive city on a per square metre basis, with land prices averaging $600/sqm during the December quarter last year, an all time high.

The square metre price was around 5 per cent higher than the equivalent in Sydney, which is the nation’s second most pricey land market.

Perth median lot prices rose to $269,000 in the December quarter last year, a 10.2 per cent rise on the previous quarter, to be ranked second behind Sydney, which recorded a median lot price of $295,000.

The median size of lots in Perth was 448 square metres, whereas in Sydney vacant blocks averaged around 516sqm.

The number of land transactions in Perth in the final quarter of 2013 was 2002, a 17.3 per cent fall on the previous quarter and a 32.4 per cent decline on the same period last year, the report said.

"Against such strong demand, surging prices and shrinking transaction volumes are strong evidence that the current supply of shovel-ready residential land is insufficient given Perth's housing requirements," Mr Gelavis said.

"Continued growth in land prices will undermine housing affordability and further weaken the price competitiveness of the region.

"It is vital that state and local governments accelerate the availability of residential land.

"There is significant pent-up demand for new dwellings in WA and the smoother release of residential building land will ensure that this demand is met in an orderly fashion."

“For the second consecutive quarter we have seen turnover in the market decline while at the same time lot prices have shown significant increase,” Mr Garrett said.

“This is a sign that the supply of residential building land is starting to fall behind the demand for new homes.

“The upturn in residential building which has much to contribute to overall economic growth risks being brought to a halt by inadequate land provision.”

Outside of Perth, the Kimberley was ranked as the nation’s most expensive regional market, with a median lot price of $260,000.

On a per square metre basis, the Kimberley was ranked second, only behind the Gold Coast, at $418/sqm.

However land sales in the Kimberley were down sharply in the second half of 2013, falling 66 per cent from the same period in 2012.

The report showed regional land sales totalled 1,460 lots in the second half of 2013, a 20.9 per cent fall on the first six months of the year.

The median lot price in the south east of the state was $155,000 in December, according to the report.