Preparing for life after the final siren

Sporting clubs have a key role to play in the development of their players’ skills, on and off the field. 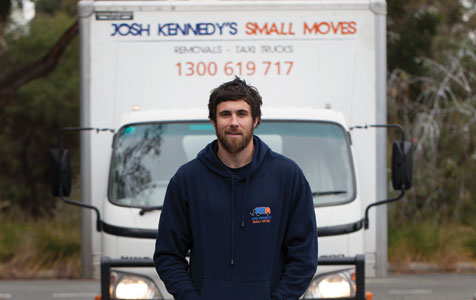 Sporting clubs have a key role to play in the development of their players' skills, on and off the field.

Far from the high-pressure world of professional football where they have spend most of the past decade, three West Coast Eagles players have taken a different kind of punt and started their own businesses.

Josh Kennedy, Sam Butler, and the retiring Andrew Embley are pursuing dreams outside the football field, helped in part by the support of their club.

Former Eagle’s star Peter Matera, who now runs his own waste and recycling business, Matera 3, with two of his brothers, said the opportunities now to find a football-work balance were far more prevalent than in his playing days.

When Mr Matera made his debut for the Eagles in 1990 he worked in the mornings as an account manager for Swan Brewery, one of the club’s sponsors, and trained in the afternoons.

Today the West Coast Eagles are among the leading clubs in the AFL for the number of players pursuing activities outside of football, either studying or working.

Once they’ve finished their apprenticeships, Mr Miller encourages every player to use their football-free day each week to pursue another interest, although he insists the motivation has to come from the players.

“You try to give them advice and some direction, but for some players it takes a couple of years until they realise they want to do something,” Mr Miller said.

Josh Kennedy, 26, who played for Carlton before being traded to West Coast in 2007, has since started a business, bought a franchise and almost finished a cabinet making apprenticeship.

Mr Kennedy started his removal and deliveries business, Josh Kennedy Small Moves, in 2010 in partnership with Steve Liddicoat, who he met while working at a mattress retailer.

“One of the things that’s been a bit different to other businesses is the start-up costs aren’t that much,” Mr Kennedy said.

“All we do is finance the truck and then we branch out and try to find the work.”

“We were looking to expand because the work was there. We’ve probably taken it slow and we haven’t jumped at things,” Mr Kennedy told Business News.

“A lot of the indication was we had to hire a truck. When we were starting to hire out trucks, that’s when we knew we had to buy another one.”

Josh Kennedy Small Moves now does between 65 and 90 jobs a month, and has started a weekly delivery run to Geraldton, with plans to do daily runs to Geraldton and Karratha. It also hires 300 square metres of storage space at its Malaga office, which Mr Kennedy would like to expand one day.

Mr Kennedy grew his business interests in 2011 when he and his partner, Lauren Atkinson, bought franchise mattress retailer Sleepy’s in Osborne Park.

“We’ve made a few changes. Retail’s been a bit tough, but that’s something you learn along the way. You’ve just got to adapt to your environment. It’s a bit like footy I suppose,” he said.

Customer satisfaction is a priority for both businesses, leading to a high number of customer referrals and repeat business.

“We have the vision of being the best in the business with customer service and making sure all of our employees are friendly, approachable and a customer is happy with the job and with the drivers,” Mr Kennedy said of Josh Kennedy Small Moves

After six and half years of part-time study Mr Kennedy has also finished the schooling part of his cabinetmaking apprenticeship.

“Footy doesn’t last forever and I wanted to hopefully finish my trade while I’m playing, so whenever that does finish you’re able to walk out the door and have a ticket,” he said.

“Cabinet making was something that you walk into an empty shell, you design, you make and then you finish the job. I like to see the end product.”

For Andrew Embley, 31, a lifelong love of food is behind an off-field cooking career in which he has co-established Beluga restaurant in Claremont and started a website CookingwithEmbers.com.au.

Along with fellow Eagles player Dean Cox, Mr Embley owns 50 per cent of Beluga, and the other half is owned by close friends and restaurateurs Anna Watts and Charlie Radici, who run Incontro in South Perth with executive chef and part owner Pete Manifis.

As the executive chef at both restaurants, Mr Manifis has recently introduced the two-year old Beluga to a new piccolo menu based on shared meals, and Mr Embley acknowledged working with Mr Manifis, Mrs Watts and Mr Radici had been vital to Beluga’s success.

“Obviously Dean and I, whilst we love our food, we didn’t want to get into the restaurant game unless we were getting in with people who had been in the industry for a long time,” Mr Embley said.

“I think early on a lot of people came here because we are football players; but in saying that if the consistency of your food and your service isn’t there, people don’t care who owns the place, they won’t come back.”

He said Seduce, which closed after about a year, became a victim of its owners’ commitments outside the venture, a problem he nearly ran into again with Beluga.

“We learned as business owners that you really have to be active in your restaurant. After about a year (at Beluga) we all stood back a little bit as things were going well, and before you know it the holes started to appear,” Mr Embley said.

Mr Embley’s wife Rayne, who has a financial background, has helped him navigate the costs of starting and running a restaurant.

Mrs Embley, who has her own website RayneEmbley.com.au and writes about beauty, fashion, food among other things, has helped introduce free video cooking classes on CookingWithEmbers.com.au to drive advertisement to the site.

Mr Embley credits the Eagles with instilling in him values he’s brought to Beluga.

“West Coast really nurtures its young players, and here at the restaurant the young apprentices need to be taught and have things explained,” he said.

“I try to work through it (with them) because we do a lot of that at the footy club so we can learn from our mistakes.”

Sam Butler, 27 regrets not sticking with a commerce degree he started two years after being drafted out of high school in South Australia, but it hasn’t stopped him jumping back into business recently.

“One of my biggest gripes with the AFL is you get drafted very young and I think it’s natural to be caught up in football and you want to get straight into it,” Mr Butler told Business News.

“You’re not worried about a life because you really want to make this work; why would you want any distractions?

“I think if you got drafted a bit later – maybe 19 or 20 – you’re forced to study or work, you’d be a lot more inclined to keep that going while you’re playing football so you’d have a lot higher success rate of players coming out of the game and moving into their different careers.”

Mr Butler has now returned to his commerce studies and started two businesses with his father-in-law, Geoff Leembruggen.

Mr Butler said Mr Leembruggen, who previously ran kitchen renovation business KB Exclusive targeting the high end of the market, decided to shut it down and bring the staff across to create a new business called My Kitchen Design.

“A lot of people come through Retravision who are doing renovations or building new houses. It was a good place to start advertising,” Mr Butler said.

Mr Butler and Mr Leembruggen have also established Innate Design and Construct, a building business they hope will have one house built by the end of this year to be sold privately.

The steel-framed houses will be pre-fabricated in Malaysia to Australian building code standards and shipped to Perth where they can be constructed on site in as little as two to three months.

Now a decade out of the football limelight, Peter Matera, 44, said going into business with his brothers had enabled him to pass on business advice as well as skills learned on the field to young staff members and football players.

Mr Matera said while he hadn’t received the same off-field opportunities West Coast players got now, he was grateful for the community work he took part in while at the club, which he continues.

“What I learned through football is … where kids are trying to strive to get to that highest level there’s a lot of things that have to help them get to that level; they have to have a lot of life skills outside of footy that will make them a better person,” Mr Matera told Business News.

To that end, he helped young footballer Lewis Jetta start a turf management apprenticeship with Guildford Grammar and mentored him until he was drafted in 2009 to the Sydney Swans.

“I mentored him for 12 months and taught him all my skills that I learned through football and a lot of what professional and business men helped me with giving feedback and information I really needed,” Mr Matera said.

“The guys I played with didn’t have the opportunity today’s footballers have. It’s a lot better now.”