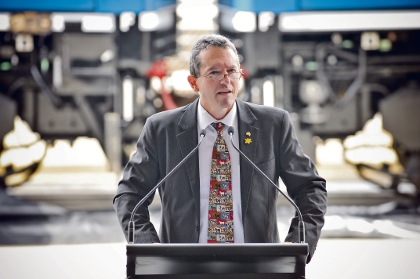 Agriculture Minister Terry Redman could yet hang onto his seat of Warren-Blackwood.

The final make-up of the state parliament will not be known for days, as counting continues in five knife-edge seats and Premier Colin Barnett ponders the composition of his new cabinet.

While the decision to endorse four more years of Liberal rule was known shortly after polling booths closed on Saturday, results from the last of the 59 lower house seats may not be known until next weekend.

Mr Barnett says his new cabinet lineup will not be determined until after all seats are decided. The field of candidates may be deeper than intially thought, with ABC election analyst Antony Green now calling Warren-Blackwood for Nationals' agriculture minister Terry Redman.

Early predictions had Liberal candidate Ray Colyer winning but Mr Redman has made a late surge on the back of preferences and is in front by a margin of about 1,000 votes.

Should Mr Redman succeed, the only automatic vacancy on the frontbench will be created by the departure of the now-retired mines and petroleum minister Norman Moore.

Mr Moore is tipped to be replaced by parliamentary secretary and economist Mike Nahan, who secured a seven per cent swing in his seat of Riverton against a strong Labor candidate in Hannah Beazley.

WA's electoral commissioner Warwick Gately said with postal votes expected to come in until Thursday, and 79 early voting locations both interstate and overseas to consider, the work of counters and scrutineers would continue for days.

"Some of these close seats will not be resolved until Saturday at the earliest," Mr Gateley said.

The seats of Belmont, Collie-Preston, Midland, Eyre and Kimberley were all still up for grabs on Monday afternoon, with less than 100 votes separating three of those electorates.

Labor powerbroker Michelle Roberts was still desperately hanging on to her Midland seat, with just 0.41 per cent separating her and Liberal challenger Daniel Parasiliti.

Mr Barnett and Nationals leader Brendon Grylls are due to hold a meeting on Wednesday, but it is believed no speedy decision on the shape and style of the new cabinet would be made.

Mr Barnett no longer needs the Nationals to form government, after what he called a "slight shift in the balance of power", but he says they will again be part of an alliance.

"I will not make any decision or any overtures about the composition of cabinet until the final result is known," Mr Barnett told ABC Radio.

"Obviously I've got to have a discussion with Brendon Grylls which we're planning to do a little later in the week."

"He and I have a terrific working relationship. We've never had a serious argument, we always find a solution and that will continue."

Mr Barnett said his government would be making a fresh start and he would not continue with legislation that had been half-debated before the election so new members of parliament could be involved.

The premier also said he would take a personal interest in agriculture issues in the Wheatbelt and wanted to reduce unnecessary regulation to allow farmers to get on with their jobs.

"I'll probably be more involved with ministers in a number of portfolios," he said.

Mr Barnett said the successful Royalties for Regions initiative would continue but with a shift from local projects to more basic infrastructure and road projects.