After a record-breaking 2012, the past 12 months have been pretty quiet for new office construction in Perth, with little significant space to be added until 2015. 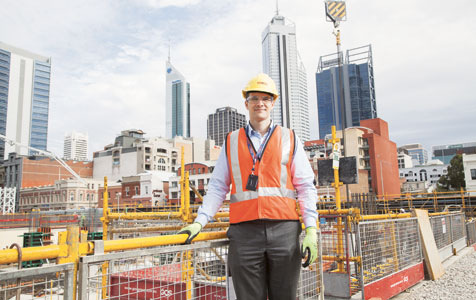 After a record-breaking 2012, the past 12 months have been pretty quiet for new office construction in Perth, with little significant space to be added until 2015.

Perth's central business district was in the midst of a commercial building boom 12 months ago, with a record 179,907 square metres of office space added to the market in 2012.

Highlights of that growth phase were the completion of the 76,000sqm Brookfield Place, which transformed the city’s skyline, and the 43,000sqm Raine Square.

During the first six months of 2013, however, only 9,144sqm of office space was added to the CBD market, according to research from commercial real estate agency Knight Frank.

Next year is expected to be similarly quiet – around 20,000sqm – before the next major round of stock additions in 2015.

However much of the new space set to come to market has already been pre-committed.

Brookfield Multiplex, accounting firm Deloitte, and law group Corrs Chambers Westgarth will take the lion’s share of the space at Brookfield Place South, while the state government’s Department of Justice is slated to occupy the Justice Tower at the Old Treasury Building precinct.

At Kings Square, Shell, DEXUS Property Group, KBR, and HBF will take up residence in towers two, three and four respectively, while the first tower is to be taken up by John Holland, which is also coordinating construction of the projects with fellow Leighton subsidiary, Broad.

“The unique part of it is delivering a precinct all at once,” Mr Norris told Business News.

“Building four buildings at once, delivering them all at around the same time to multiple tenants and different owners is a real achievement, which hasn’t been done in Perth before.

“It showcases our capability and our focus on delivering innovative solutions and high-quality product to the market; it is a big project for Perth and we understand the importance of that.

“The biggest focus for us is that we want to deliver a precinct at once that provides everything that businesses are looking for.”

At Elizabeth Quay, international energy giant Chevron confirmed what Business News exclusively reported in July 2011, announcing it would build a new headquarters in 2016, securing the first plot of commercial land at the landmark waterfront precinct for $64 million.

Engineering firm Aurecon has signed up for just over half, or 6,000sqm, of the space available at the Perth Diocesan Trustee’s development at 853 Hay Street, while engineering firm WorleyParsons is understood to be eyeing space either at Kings Square or Georgiou Capital’s Milligan Square development.

In July, the Property Council of Australia said the Perth CBD office vacancy rate was 6.9 per cent, up from 5.4 per cent in January.

Vacancy in Perth’s best office stock, however, was at 2.3 per cent in July, down from 4.5 per cent at the start of the year.

Knight Frank said it expected take-up of existing space in the CBD to remain flat over the next six to 12 months, with vacancies forecast to rise to around 8.4 per cent by midway through next year.

Colliers International head of office leasing David Cresp, however, said there had been an increase in activity as a result of stabilisation in the mining and resources sector, and confidence was returning to the market.

He said the past 12 months had been relatively quiet for office leasing, with Chevron taking up 28,480sqm in QV1 in the largest deal of the year.

“We’re in a low interest rate environment, which is good for business, and we will start to see that filter into business growth over the course of next year.

“China is going to keep on going, that’s going to increase demand for products from WA, and population growth continues to be strong.

“All of that will lead to more demand for office space over the medium to long-term.”

Despite around 160,000sqm of office space set to come online in 2015, Mr Cresp said he didn’t anticipate any significant oversupply due to the high levels of pre-commitments and an expected rise in demand.

“What we are talking about is around a 10 per cent addition to supply, and we don’t see that as a massive issue.

“A lot of the new supply is pre-committed and a number of those tenants are tenants that are growing.”

Outside of the CBD, suburban office developments have become more attractive to tenants as developers build-in added amenity.

BGC is set to complete its 15,000sqm office development on Walters Drive in Herdsman in January, with the 12-storey building only taking around 16 months to complete.

Privately owned developer Qube Property Group currently has three office developments under construction, with two of them located outside of the CBD.

In West Perth, international oil and gas engineering group Saipem will anchor Qube’s 2,588sqm office building at 1101 Hay Street, while in West Leederville, the developer’s joint venture partner, the Western Australian Local Government Association, has committed to take up 80 per cent of the project at 170 Railway Parade.

Global engineering, design and environmental services group GHD has agreed to lease 9,000sqm at Qube’s 999 Hay Street development in the city, while the developer is also seeking pre-commitment on a 9,000sqm office project in Subiaco, named Subiaco Green, scheduled for completion in early 2016.

Qube director and partner, James Collis, said pre-commitments had become increasingly popular for suburban office developments, as tenants look to move out of ageing, inefficient space in the city.

“New buildings and pre-committed space are in a very good position,” he said.

“There is no doubt that there is a lot of space coming on in 2015, we’ve got an improving market.

“Demand is increasing, larger companies are gearing up again and there seems to be more confidence generally in the market.

“Whether that’s enough to take up what’s available now and what’s coming on, I don’t have a crystal ball, but I’d say the newer space that’s coming out of the ground is extremely well positioned.”